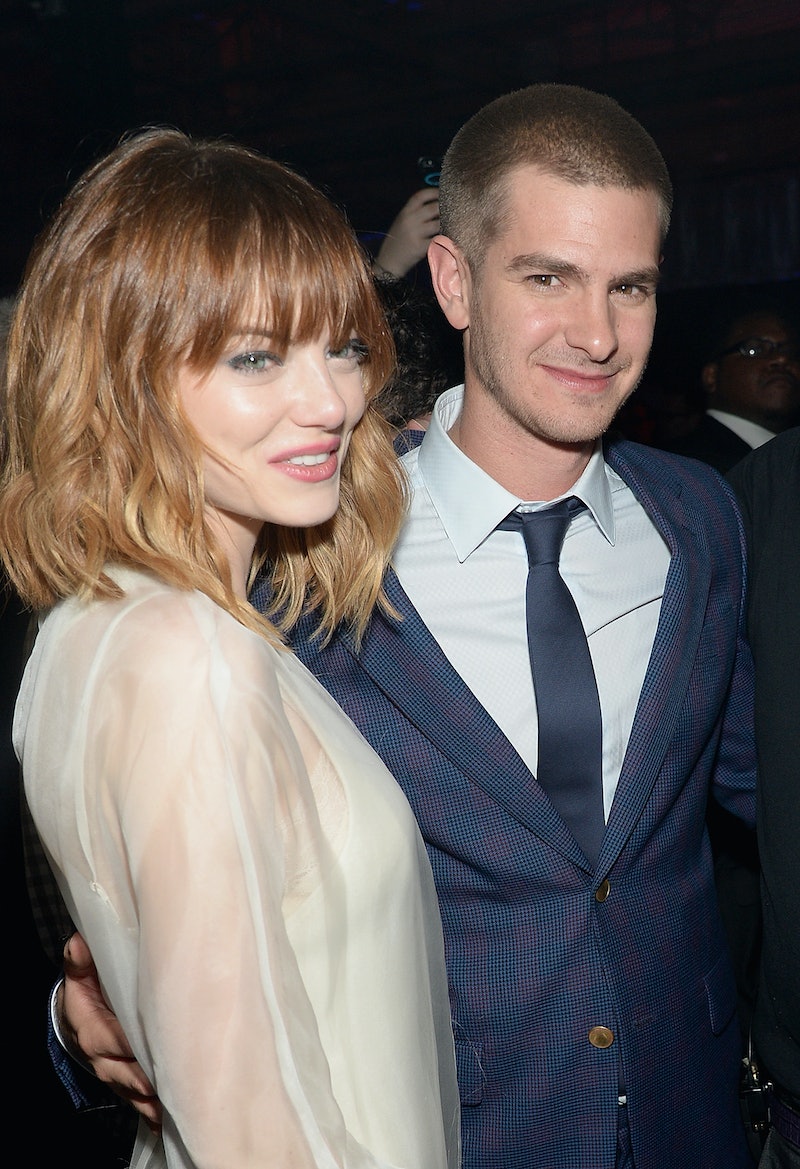 Super sad news for fans of both Spiderman and true love. E! Online is reporting that Emma Stone and Andrew Garfield have broken up after over three years together as a couple. And, if you’re just as devastated as I am by the news, then you’re not going to be happy to hear Us Weekly 's report, in which a source states that "it just wasn't working" between Stone and Garfield. Of course, that's a vague reasoning — and, as a dedicated fan, I'm sure I'm not the only one wondering why exactly Emma Stone and Andrew Garfield broke up.

It turns out that their relationship had been in a rocky spot for some time. Though fans will likely never know the exact reasons behind their ultimate split, it’s clear that the break-up had been coming: The pair (who met while filming The Amazing Spider-Man in 2012) reportedly took a brief break from their love affair earlier this year in April after a source told Us Weekly that they had been fighting and not spending a lot of time together. After these reports surfaced, a source spoke exclusively with Us Weekly about their then-temporary split, saying, "There was no drama, they've been apart while working. They still care about each other." Just a few weeks later, the two were back on, holding hands and eating breakfast together soon after in May. They were seen eating at Malibu Farm on May 19, and they've appeared fairly happy together during various outings since then.

Though it's not clear when Stone and Garfield's alleged break-up occurred this time around, People reports a source stating that it happened "a few months" ago. "They still have love for one another," the source stated, according to People. "They are on good terms with each other and remain close."

So, that in mind, the true story behind this most recent reported break-up will most likely never be known. During their relationship, the two have been notoriously private about their personal lives — especially their relationship with each other. When asked about Garfield after their reported split in April, Stone remained silent about their relationship and told the Wall Street Journal that, “I never talk about this stuff for this exact reason — because it's all so speculative and baseless.”

With that kind of quote in her recent history, something tells me that we’ll never get a straight answer from either of the stars on why exactly they reportedly called it quits for good. However, whether or not we will ever know the real reason behind their split, break-ups are hard on everyone involved — so, here’s wishing them the best in the coming months.

Bustle has reached out for comment in response to these reports, but has yet to hear back.