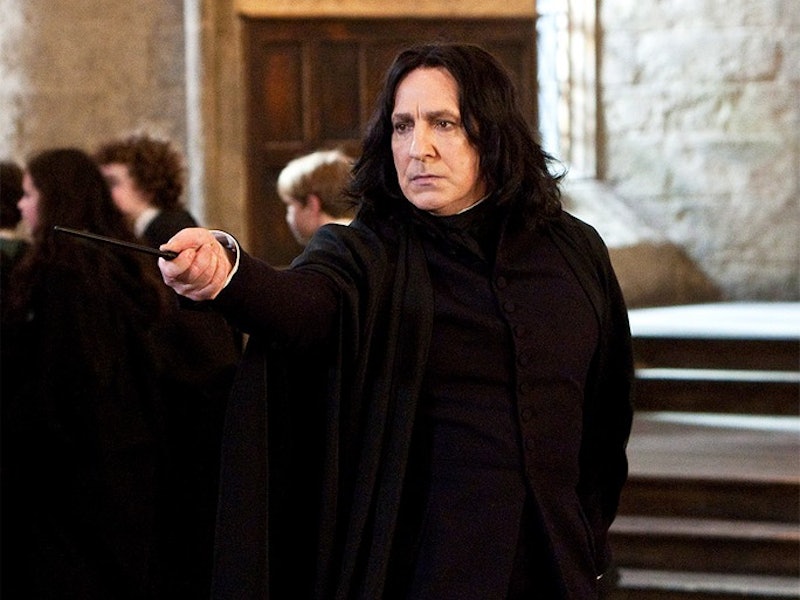 Despite the fact that the last book was published almost ten years ago (which makes me feel so old I can't even tell you), there's still plenty left to ponder from the Harry Potter series. For instance: Why exactly did Severus Snape hate Neville Longbottom so much? One Quora user thinks they have an answer, and it's pretty compelling.

Severus Snape has long been a controversial figure in the Harry Potter universe. Although he was, ultimately, on the side of good and was probably crucial to preventing Lord Voldemort from taking over the magical world, Snape was also originally a Death Eater. And he didn't leave Voldemort's camp for anything as noble as "realizing that genocide is wrong" but because someone he personally cared about was in danger — namely, Lily Potter, Harry's mother. He also spent a lot of time during his professor days at Hogwarts terrorizing students — and there was perhaps no one he was more cruel to than poor Neville Longbottom.

So why exactly did Snape single Neville out? Did he just sense that Neville was the sort of kid who would be particularly affected by bullying? Or was it, like many things involving the elusive potions maters, something deeper?

Quora user Sahil Juneja, who lays claim to having read the entire Harry Potter series 16 times, has a theory. As explained on Quora:

Neville could have been the "Boy-Who-Lived" . Had Voldemort chosen Neville instead of Harry, Lily would still be alive.

People who joined the "Snape Fan Club" after his memories revealed him to be someone who sacrificed his entire life for his love, forgot that Snape always was a vile person. He was full of hatred, and he wanted to prove himself to be a better, smarter and stronger (magically) wizard than most.

For years since Lily's death, he blamed no one but himself. He turned coats for Dumbledore in order for some penance but that wasn't enough of course. He still loved Lily and couldn't bear that thought. And one fine day, Neville Longbottom came along. The living embodiment of his guilt. He manifested all his anger and hatred for himself onto that poor little boy. It was more likely a subconscious thing. The sight of Neville triggered the guilt and he couldn't stand it.

All of which sounds tragically plausible. After all, Snape was in love with Lily Potter from the time she was still Lily Evans. As seen in his remembered conversation with Dumbledore, he did everything he could to save her, probably including trying to convince Voldemort that Harry wasn't the baby in the prophesy foretelling Voldemort's downfall. And we already know that Snape never quite got over Lily's death — Dumbledore is still referencing it with him in conversations over a decade later.

So when Neville shows up, it makes sense Snape wouldn't like him, especially given that Neville's arrival at Hogwarts also coincided with Harry's. So all of these feelings would already feel fresh and painful for Snape.

As Juneja goes on to point out, there are also other reasons Snape might have singled Neville out, including Snape's general superiority complex, hatred of Gryffindors, and his general bullying behavior — which might or might not have been the result of being bullied by Harry's father and his friends when Snape himself was in school.

However, once you think about it, you also realize that Snape definitely would have considered what would have happened if Neville had been attacked all those years ago instead of the Potter family. It's impossible to imagine that he wouldn't have thought about it, and it would make sense that those feelings might make him lash out at Neville once Neville was his student.

Of course, no matter what his motivation, it's never OK for a teacher to bully a student the way Snape bullied Neville — in fact, most of Snape's behavior as a teacher was pretty reprehensible. Whether you feel bad for him or not, it doesn't excise the way he continually abused his position of authority over defenseless kids.

It's just also hard not to feel bad for everything he went through, too. Even if he didn't handle it the way he should.