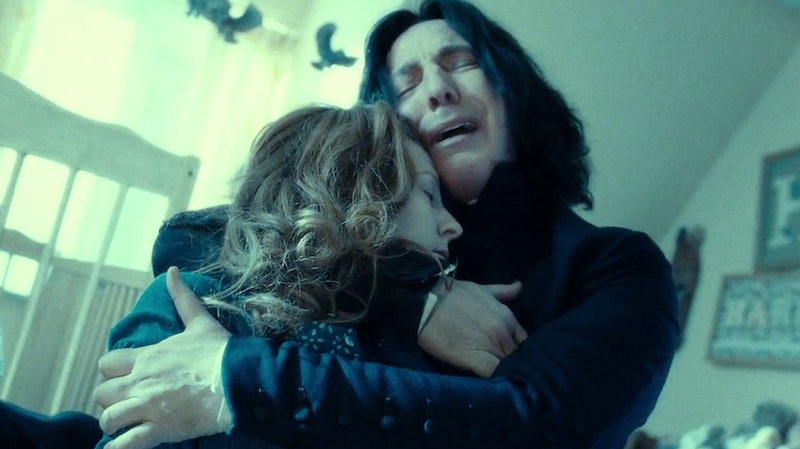 Here is an inarguable truth: Snape's life sucked. He had a terrible childhood, he was clearly a misfit, he coped by falling into a group of terrible people that there was virtually no escape from, and he watched the love of his life fall for and eventually marry and procreate with his sworn enemy — only to have to see reminders of her now famous son everywhere for the rest of his life, and eventually have to see him at Hogwarts on a daily basis. I am not here to argue the total suck factor of Severus Snape's existence, because it would be like arguing with the sun. What I am here to argue, though, is that despite all this, I will never regard Snape as a hero for as long as I am alive.

As a Hufflepuff I generally like to avoid confrontation of any kind, but I'll go ahead and say it: I'm truly not sure how anybody can wish that Lily Evans had ended up with Snape. I don't mean for this article to be a giant justification of her marriage to James, because it isn't — truly, I wouldn't be Team Snape even if James had never existed in the first place. My concern for people who support Snape goes way beyond any other loyalties I have for other characters in the books, into straight up concern. Nobody exemplifies the words "problematic fave" more than Severus Snape, but it worries me that he is anybody's "fave" at all. Here are all the reasons I can't understand why anybody would be Team Snape:

Loving Someone Does Not Redeem Terrible Deeds

The flimsiest defense of Snape is the first one I will examine: He loved Lily. In some fans' minds, this is so terribly romantic and angst-ridden that it somehow excuses all of his other actions — which were, by the way, terrible. He essentially aligned himself with a wizarding terrorist organization, endorsed the torture of fellow magical people as well as Muggles, and served a man who murdered for sport. The ability to feel love for one person does not cancel out the very real and horrible crimes he committed; in fact, it's selfish to think that he was accomplice to the murders of so many but was only able to stop himself to save the one person it suited him to protect.

But his crimes aside, let's examine how problematic his infatuation with Lily was. Even before the days of Voldemort, we had proof of him calling Lily a "Mudblood," and her reaction seemed to imply that she was used to this kind of treatment from him by then — so the idea of romanticizing his relationship with Lily seems to be romanticizing the ideas of an abusive relationship in general. And his continuing love for her despite aligning herself with James was possessive, manipulative, and inarguably obsessive.

J.K. Rowling herself demonstrated just how twisted his love for her was in one interview post-Deathly Hallows: "He never really understood Lily’s aversion; he was so blinded by his attraction to the dark side he thought she would find him impressive if he became a real Death Eater." The idea that he thought Lily would be pleased by this shows just how skewed his perception is of her, that he can claim to love her so much and truly not understand her at all. How can fans argue that his love for her was redemptive when he proved time and time again that he didn't truly know her or respect her well enough to love her at all?

Snape Had A Chance To Honor Lily's Memory, And Disregarded It Every Single Day

Let's fast forward back to Harry, sitting in Snape's class on the first day of Potions. Yes, he looks like his father. Yes, he is a reminder of everything that Snape could have had with Lily, but lost the moment he aligned himself with the Death Eaters. But he is also his mother's son. He is also orphaned because of the people that Snape served, under circumstances Snape played a significant role in. He is the very last thing on this earth preserved of Lily Evans, the supposed love of his life — and yet Snape's cruelty toward Harry is prolific and, quite frankly, ridiculously immature.

Yeah, his heart was broken those 12 years before when Lily died, and some time before that when she chose another man over him. But Snape's also a motherf*cking adult. Harry was a child who hadn't done anything to provoke Snape, and only ever did after Snape was persistently awful to him. As romanticized and supposedly tragic as Snape's ~love~ for Lily was, and as much as he claims to regret the awful things he did in the past, apparently that love and regret were not enough for him to resist the urge to be deliberately awful to an unsuspecting little kid. You would think the consequences of his past sins would inspire him to redeem himself by at least treating her child with the minimum amount of decent human respect — if anything, his treatment of Harry proves that the tragedy that was meant to redeem him, in fact, did nothing to change him at all.

A Terrible Childhood Does Not Excuse Someone's Behavior

The last argument I will pick apart from the Team Snapers of the world is the argument that Snape couldn't help the way he was, because the environment around him conditioned him to be that way. He was raised by neglectful and possibly abusive parents; he wore ill-fitting, ugly clothes; he was markedly different from his peers from the moment he arrived at Hogwarts; he was forced to return to a house that he hated every summer during his schooling years; he frequently was made to feel inadequate by his peers.

The parallels between Harry and Snape's childhoods are impossible to ignore, and in fact are heavily alluded to in Harry's Occlumency lessons. And yet Harry, despite the added burdens of fame, of the public mistrusting him, of the mockery of his peers, and the outright hostility of the wizarding government focused solely on him, still managed to remain a good person in his core. We give him so much flack for the angsty rants in the fifth book, but a few pages of caps lock are nothing compared to helping murder a bunch of people to help create a master pureblood race. Harry is proof someone can rise up against their circumstances; we shouldn't be able to use those same circumstances to excuse despicable behavior in Snape.

I acknowledge, of course, that Snape switched his allegiances. That he dedicated what was left of him after Lily's death to serving Dumbledore and the Order, no matter how begrudgingly. But that doesn't cancel out the awful things he did, or the cruel behavior he continued to exhibit long after the fact. Does he deserve our pity? Absolutely. Does he deserve our respect? Depends on whom you're asking.

Because yes, Harry comes to accept him as a hero — but that doesn't mean the rest of us have to. In truth, Harry owes Snape nothing. What Snape did might have been scary, and might have seemed heroic, but was ultimately motivated by selfishness, even in his quest to redeem himself. I disregard Harry's acceptance of Snape, because, given the parallels of their lives, it was likely a very personal and unique kind of acceptance — and to some degree, an acknowledgement of how easily it could have been him in Snape's shoes.

That being said, as an objective reader, I will never be able to extend Snape that same kind of forgiveness myself. And judging by the hints of the upcoming Cursed Child plot ... I might not be the only one. (Sorry, Albus Severus. Stay strong.)