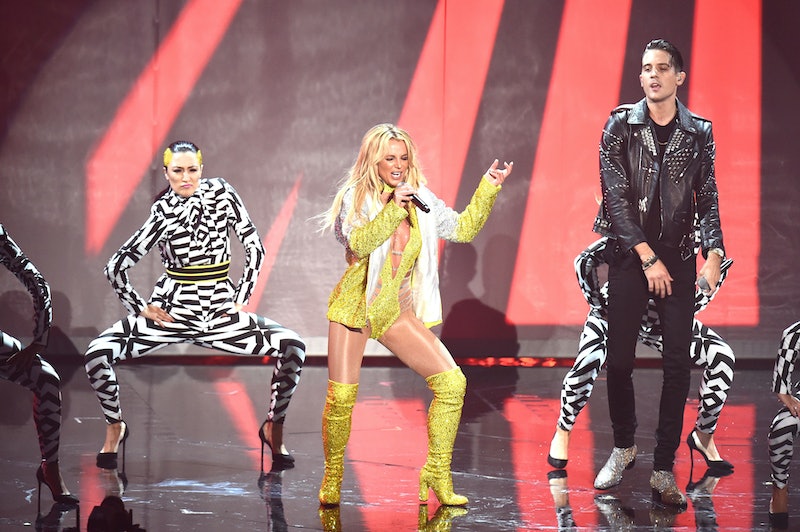 Ever since the supreme pop-bomb known as Britney Spears' new album Glory dropped on Friday, fans have been going pretty nuts about it online. And, I don't know about you, but I've been blasting it, on repeat, for this past weekend and indulging in the sort of lip synching theatrics which would get me through to the next round on an episode of RuPaul's Drag Race. So, I've been beyond excited to see Spears back on stage at the 2016 MTV VMA's, mostly just so I can see her slay some of my favorite songs from the album. Except, guys, I'm watching her right now and is it just me, or is Spears lip-synching at the 2016 VMAs?

Sadly, it seems as though that might be the case. But, on the other hand, lip synching is a problem which has caused controversy for the singer on a couple of occasions in the past. In fact, at the 2007 MTV VMAs Spears made headlines for her troubling, slightly disembodied performance, which felt distressingly lethargic and listless. Performing the song "Gimme More," Spears' lip-synching was emphasized by how languid and sluggish she appeared on stage — she didn't feel present at any part of performance, and it was truly upsetting.

2007 was a notably difficult year for the artist, however, and marked the period of her life where she would shave her head in public and act erratically. What was intended to provide Spears with a platform for her comeback, however, actually gave her something of a setback.

Just two years later, the singer would again court controversy during the Australian leg of her Circus tour. Within the space of just two shows, fans and critics alike were complaining about her proclivity for lip-synching along with her disconnection from the audience. WA Today described her performance in the first show of the Australian tour as being "heavy on miming and light on audience interaction" before adding that Spears "often had her back to much of the crowd." It was also being reported that disappointed fans were walking out of her show due to the lip-synching, with an Australian minister for fair trade even suggesting Spears' shows should contain a disclaimer regarding her lip-synching so that fans "know what they are paying for up front."

The fact is that those years were understandably troublesome for the pop star, and so it's easy to see why elements of her show could have been disappointing, whether she was singing live or miming. Truthfully, I don't think it matters whether Spears is lip-synching at the VMAs tonight or not — at this stage in her career, she has nothing to prove to anyone. Not only she is insanely talented ,but she also knows how to put on a good show, and, whether she was singing live or not, you can't deny that she absolutely slayed on that stage, regardless. All hail Queen Britney Spears, and may she perform however the hell she wants for as long as she may reign.