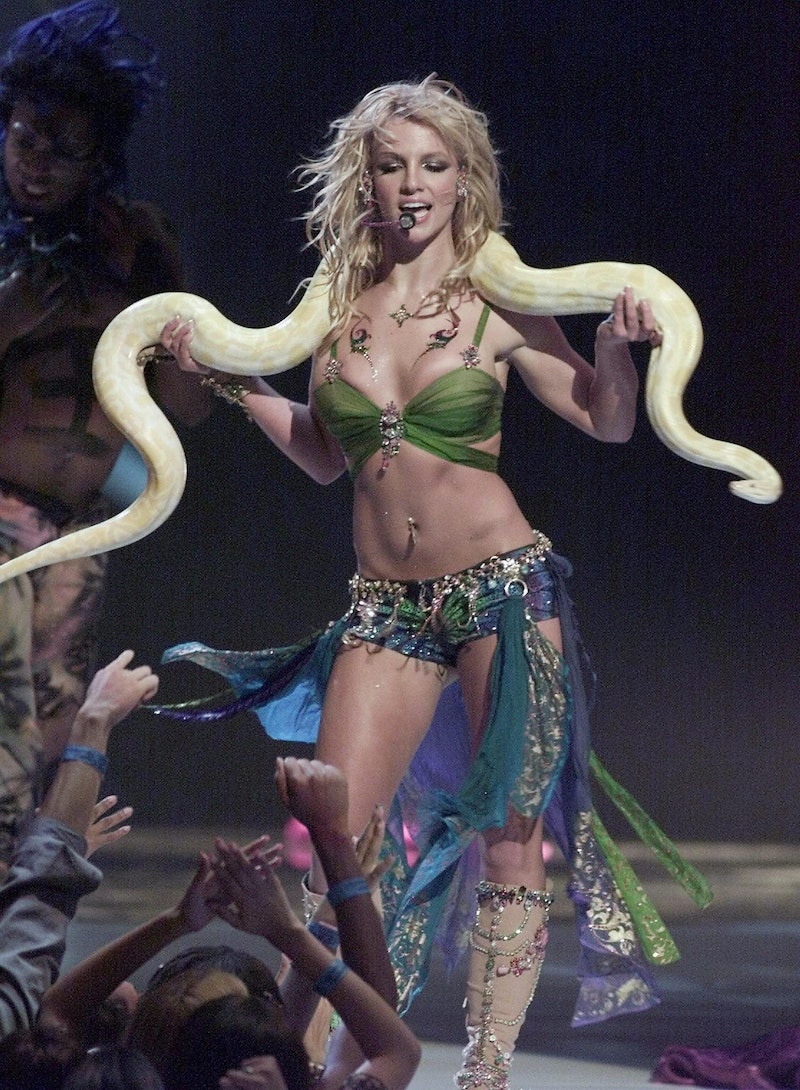 For the first time in almost 10 years, Britney Spears will perform at the MTV VMAs. There are only a handful of performances on TV that remain crystal clear in my memory, and most of them involve Britney Spears. The year was 2001. Spears was at the top of her game/on a poster in my bedroom wall, and there was an up and coming star that none of us knew even existed yet. I'm talking about Banana the python snake, and also, Spears' iconic "Slave 4 U" performance at the 2001 VMAs. It was a historically significant moment that defined the early aughts in ways I couldn't have even imagined back then. Though Spears has performed numerous times since that fated night, none have stuck with me quite as much. Now, however, the pop star back, and I'm slowly starting to believe that 2016 might be the new 2001 for her.

The singer made the announcement via her social channels with a teaser video featuring either Banana the snake or some imposter. There's so much to unpack here that I'm not even sure how and where to begin. In the video, we get allusions to all of Brit's greatest VMAs moments, leading me to believe that this upcoming performance might include some of her most memorable stints. Will it go down in history as her best one yet?

The singer will perform alongside G-Eazy — the rapper featured on her latest single "Make Me" — so it's fair to say that she will bring new material on stage. Nonetheless, here's how the singer can make her 2016 performance just as iconic as her other ones.

1. Bring Out A Live Animal

All right, so it doesn't have to be Banana, but how do you one up a yellow python? When Spears took the stage and put that snake around her neck, the world collectively mouthed "git it git git git git it." I don't know that for sure, but I'm guessing. Since she actually already had a tiger on stage at the beginning of that performance, I really don't know what kind of animals she could bring out. But I am saying that a bear would be cool. Dangerous and unethical, but cool.

Ever since she made the declaration of her presence on the track "Gimme More," the phrase has become synonymous with the artist herself. "It's Britney B*tch" means Spears is here, and she's about to remind you why she's the queen of pop music. Honestly, it should be required that she say it before she does anything. Like walk into rooms.

Off the top of my head I'm thinking oh, I don't know, any of them. "Hit Me Baby One More Time" would, of course, be welcomed, since that's what she performed the very first time she was on stage in 1999. I would be pleased to see "Oops! ...I Did It Again," because she also performed that one in 2000. Even the classically underrated "I'm Not A Girl, Not Yet A Woman" would make me feel nostalgically happy, though I think at this point it might be strange for her to sing that one.

Catch her performance when the 2016 MTV VMAs air on Sunday, August 28.