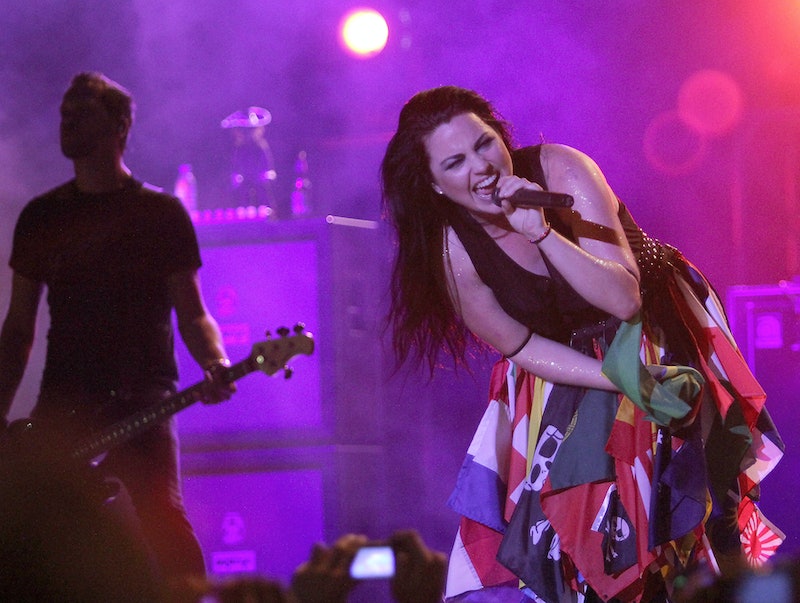 Get your black lipstick and nail polish ready, because it’s 2003 all over again: Evanescence has announced a fall 2016 tour, because clearly they are in the business of making all your tween dreams come true. Even if you personally haven’t thought of the band in a long while, but the band was a popular gateway to gothdom for sullen middle schoolers in the early '00s, myself included. And even today, there are certain Evanescence lyrics that soundtracked your adolescence angst... and made residence in plenty of your AIM away messages.

I know, I know, you’re already cringing; I thought we all moved past that. I even thought Evanescence moved past being Evanescence, as these days frontwoman Amy Lee is releasing a children’s album to be titled Dream Too Much . But she’s apparently eager to hop back on the sadness train, telling Rolling Stone of the upcoming tour, "Just when you thought I was off the hard stuff! It's going to feel amazing to step back onstage with the band this fall.” Alright, then, all aboard, kids.

Because nostalgia is important and because I probably wouldn’t have found other goth mainstays like The Cure without them, join me as we revisit some immortal Evanescence lyrics that summed up your pre-tween struggles.

You volunteered to read a torrid love poem in class, 10 Things A Hate About You-style, and your crush didn't recognize the shout-out. What a waste of perfectly good eyeliner.

"OK, mom, I'm sorry that Maria's mom drove us to the Freehold mall instead of the Eatontown mall, next time I'll ask permission first, ugh." [angrily closes flip phone in a huff]

3. "Bid My Blood To Run/ Before I Come Undone/ Save Me From The Nothing I've Become"

Really, if you could get your hands on some Manic Panic and dye your hair purple pronto, it would really amp up your alt cred.

4. "Without The Mask, Where Will You Hide/ Can't Find Yourself Lost In Your Lie"

That feel when you were listening to Britney Spears two weeks ago but now you've transitioned to what you call "real music."

You took a picture with Gerard Way at Warped Tour and found out the other day that he was doing that with some other fans and your whole life is a lie BUT IT'S FINE.

6. "And If You Have To Leave/ I Wish That You Would Just Leave/ 'Cause Your Presence Still Lingers Here/ And It Won't Leave Me Alone"

But OMFG, "Helena" by My Chemical Romance came on in Spencer's Gifts the other day and it was so good, it's just not fair the band broke up!

Your seventh grade boyfriend of two weeks broke up with you for someone in your 3rd period Spanish class, and you took that betrayal kind of hard.

When you're not sure if the cute guy who works at your local Hot Topic is into you, or if he's just trying to get rid of some extraneous Invader Zim merchandise.

9. "And I'm Pouring Crimson Regret And Betrayal/ I'm Dying, Praying, Bleeding And Screaming/ Am I Too Lost To Be Saved/ Am I Too Lost?"

You repurposed this in a Livejournal entry because, you know, good use of "crimson."

10. "Don’t Say I’m Out Of Touch/ With This Rampant Chaos, Your Reality"

It was not your strongest semester, to say the least.

12. "I Believe In You/ I'll Give Up Everything Just To Find You/ I Have To Be With You To Live, To Breathe/ You're Taking Over Me"

Your parents found this reaction to sold-out Good Charlotte tickets a "tad dramatic."

If you're looking to grab Evanescence tickets before they sell out, they'll be available August 26. Hopefully this time around, you won't need to be escorted to the show by a parent or guardian who "just doesn't get it."