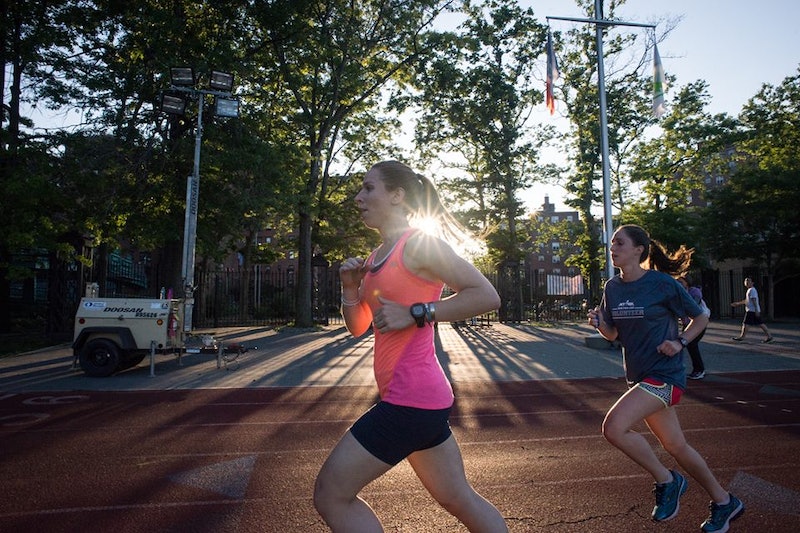 While there are many things that define me, one of the most prominent things — and perhaps the one that I celebrate most — is that I’m a runner. My running journey began in high school, circling around a 200-meter track. At the time, I was competing in everything from the 4x400-meter relay to the two-mile race, and I absolutely hated it — partly because I had joined the team thinking it would be more of a social experience, rather than a challenging one. It wasn’t until college, when I began training for a half marathon that my sister had encouraged me to sign up for that I found an amicable relationship with the sport. I started running for me.

Over the years, my relationship with running has only grown stronger. Since 2010, I’ve run nine marathons and have crossed the finish lines of race courses spanning every distance in between, from 5Ks to half marathons. I’ve discovered a great running community in New York City, largely thanks to a group called The Most Informal Running Club, Ever (TMIRCE). Running gives me an outlet to run off frustrations, shake off a bad day, and work toward new goals.

I know a lot of people think that my lifestyle is insane. But that hasn’t stopped me from feeling accomplished crossing each race finish line, getting excited to wake up early on weekends and meet friends for a run, or enjoying the raised eyebrows and questions like, "How many miles did you run this morning?" from non-runners. Another thing that hasn’t stopped me from lacing up my running shoes? The recent fatal attacks on female runners that have targeted women running alone.

Earlier this month, a New York City woman was killed while out for a jog in Massachusetts. This attack came less than a week after a female runner was murdered while out for a run in Queens. Both incidents were preceded by a woman in Michigan who was shot four times during her daily run. The fatal assaults created an uproar of commentaries about women and running, both on my Facebook newsfeed and in the media. The fervor is not just about running alone, but what we wear, what precautions we take, and how we act when we do it. It all reeks of victim blaming.

Are we being careful? Are we aware of our surroundings? Are we wearing anything revealing or promiscuous? Do we carry our phones in case of an emergency? Do we keep pepper spray in our pockets to ward off any suspicious characters on the trail?

The answer to all of these questions is, “Yes.” While I don’t personally run with pepper spray and sometimes admittedly ditch my phone in search of an unplugged hour to myself, women are forced to constantly think about being safe while simply trying to get some exercise or much-valued alone time. For this reason, I often try to run with a group (for both social and safety reasons), or in an area that’s populated with lots of other runners.

Laura runs with pepper spray. Rachel tells a friend her whereabouts and route before she heads out for a run. Erin admits she hopes she can outrun any attackers. Michele has even toyed with the idea of using her keys as a weapon in case of an unexpected attack.

My roommate and I have started using a buddy system of sorts; checking in with one another about our running schedules and trying to run together as much as possible. If I am running alone, I usually bring my phone, but run without music in case I need to keep my ears open for any unwelcome approachers. Since the sport is, to me, about clearing my head and/or running off my frustrations, all of these added precautions can be annoying, to say the least.

I know some of my female runner friends take similar precautions. Laura runs with pepper spray. Rachel tells a friend her whereabouts and route before she heads out for a run. Erin admits she hopes she can outrun any attackers. Michele has even toyed with the idea of using her keys as a weapon in case of an unexpected attack.

As individuals, we should have the right to run, walk, or go wherever we please without the fear of getting hurt. But the truth is, we don't. As Bustle writer and fellow runner Emma Lord points out in her own recent essay about running and safety, the recent attacks are swift and brutal reminders of the fact that, "I am a woman existing in a space by myself, and by that virtue alone, I am not safe."

The double standard is clear. For example, last Saturday, I ran with two of my male friends, both of whom removed their shirts due to the extreme humidity. Were they asking for individuals to ogle their bodies, or for unwanted attention? No. They were just eager to find a way to cool down. Feeling safety in numbers, I stripped down to a sports bra too — something I would never have done had I been running alone.

I can't stop the construction workers on the street who applaud me for running at 6 a.m. (yes, they actually clap) any more than I could stop a potential attacker from catching me off-guard at exactly the right moment. I've taken self-defense courses, I've listened to all the warnings, and, yes, I'm aware of what's happening on the news. I am vigilant, but I am also human.

So here's what I propose: If you are a woman, don't let fears bully you out of doing something that clears your mind, makes you feel stronger, and gives you that much-coveted alone time. Instead, educate others, especially men, about your struggles with feeling unsafe while running, share your own experiences on social media, circulate relevant articles on the subject, and simply let people know that catcalling, jeering, or gesturing towards runners isn't cool. The Huffington Post has even started the hashtag #RunningWhileFemale to spread awareness, and ultimately, prevent this type of harassment. Don't be silent.

We can also act as allies by looking out for each other on the road. Waving, high-fiving one another, and sharing words of encouragement as we pass each other running can go a long way, as can warning one another of any potential threats in the nearby area.

I won't stop running, and I don't think you should, either. Sure, I may stiffen as I pass men who applaud me, or call out "Why are you running? You don't need to run," as if my efforts are purely for their benefit. But I think staring straight ahead, continuing on my path, and failing to look back in fear sends a much stronger message.

Images: The Most Informal Running Club, Ever; The Rise NYC