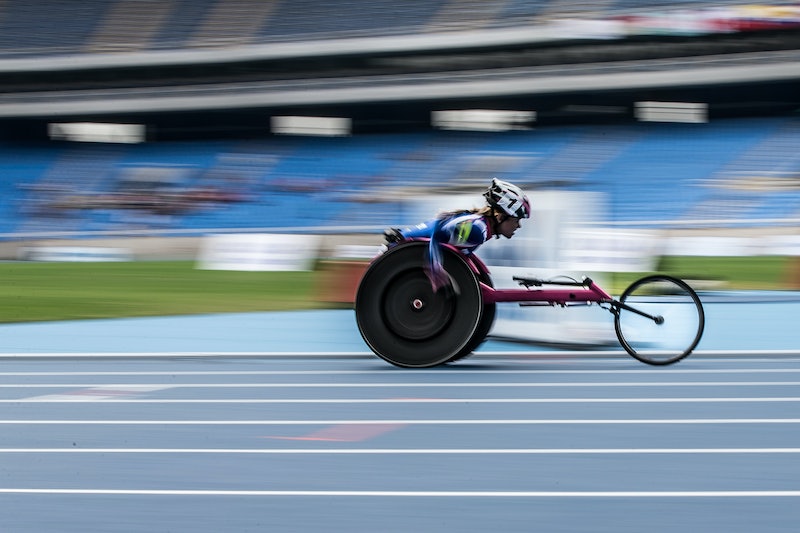 The Olympics are over. Let us now mourn, put away our national flags, and daydream about women taunting world records with their amazing feats of strength and athleticism. But wait! Rio 2016 doesn't mean the end of the fun. If you've just discovered a love for women in sports, or Rio's awakened something in you that desperately wants to see a particular competition in action, rest assured, there's something for you. Whether it's record-breaking sprinting or heartbreaking sports politics, there is still plenty to learn and enjoy about women in sports post-Olympics.

Being a fan of women's sports is vital for their continued existence: the Olympics tends to bring a big boost of publicity, but female athletes continue to be paid less than men across the board, and female-dominated events often attract less media attention and less advertising. Sexism, alas, remains a dominant force in the structuring of our attention and dollars towards male sports. And that's ridiculous. So watch, read, consume, nab tickets, get involved, and encourage your friends to get into it too: you're making a contribution as vital as the ones being done on the pitch. Let's all be devoted fans of women kicking ass at sporting events, and the stories they tell about themselves.

Want more athletic marvels by women? Be prepared. This list of what to watch and read now that the Olympics are over might give you a conniption.

Seriously, guys. If you're still desperate for people with amazing muscles doing mind-blowing things, the Paralympics is for you. (And it's also courting scandal: Russia, after an appeal to the IOC, was able to send some of its athletes to the Rio Olympics following the exposure of their state-run doping program, but the Paralympics have decided today they're having none of it, and have banned all Russian athletes, period.)

The people to watch? Home hero and seriously dominant sprinter Terezinha Guilhermina, who's queen of the visually impaired sprints and is hoping to bring home multiple medals for Brazil; Chinese powerlifter Yujiao Tan, who's hoping to lift over 132kg; Eleonora Sarti, the world number one in wheelchair archery from Italy; and the U.S. women's goalball team, who are the gold medal favorites. (Goalball, in case you've never heard of it, is a ballgame on a court exclusively for blind athletes.)

NBC is doing the coverage, and you can catch it from September 7 to 18.

If you're American and a woman, you should be in awe of your national women's basketball team right now. They came away from Rio 2016 with a record sixth consecutive gold; it's one of the longest periods of national dominance in a team sport in Olympic history. And the LA Times reports that the WNBA is hoping that, post-Olympics, they'll get a spike of interest in their sport from people inspired by their utterly ridiculous performance.

It's particularly important, the Times points out, because even the WNBA's world-shattering achievements don't attract big advertising dollars or shares of air time; so if you want to catch one of the players in action, or generally see incredibly tall, awesome women slam dunk their way into history, get yourself to a WNBA match. August 26 is the beginning of the second half of the 2016 season, building up to an epic final in October; you can catch select games on ESPN, ESPN2, and ESPN3.

History buff? Tennis fan? Hate sexism? If you ticked even one of those, this is probably the book for you. If you ticked all three, it's your new favorite. Billie Jean King, one of America's best tennis players in history, made a giant splash and hit a devastating blow to sexism in sport when she decisively beat Bobby Riggs in 1973's "Battle Of The Sexes," a tennis match Riggs had proposed to show the superiority of the male. Susan Ware's book places that victory in context, tying King to the introduction of Title IX (which prevented gender discrimination in sports across the US), the revival of women's American sport, and the history of feminism. It's a pretty stunning ride. Get it here.

If there was one standout new sport at Rio 2016, it was the introduction of the rugby sevens for the first time, in which seven-a-side rugby teams competed bloodily for medals. (As an Aussie I may be biased, as the Australian team romped home to win the women's division; but Canada smashed it to bring home bronze, so your northern neighbors clearly know what's up.) The good news if you can't get enough of athletic women playing full-contact tackling sport? The Women's Rugby World Cup takes place in August 2017. It kicks off in Dublin, Ireland, and the USA's Eagles will face up against stars like New Zealand, Ireland and Wales. It's still unclear what coverage it will get on mainstream sports channels in the U.S. — but keep an eye out!

5. Letters to a Young Gymnast

Simone Biles is likely signing a deal for her autobiography as we speak, but gymnast fans who can't wait for that will be satisfied by this memoir from probably the most famous gymnast of all time, Nadia Comaneci. The first woman to score a perfect 10 on any gymnastic apparatus, at the age of 14, Nadia's life has been an interesting one: after competing for Romania at successive Games, she defected to America and became one of the most enduring stars of gymnastics history. Letters To A Young Gymnast documents her rise from small child to Olympian and on to retiree from her beloved sport, and it's sometimes pretty unflinching about life in Communist Romania. Get it here.

If running's your thing and you're desperately sad that, post-Paralympics, there'll be nobody around to watch lacing their spikes and flexing at the starting line, you're in luck: the World Athletic Championships in London are only a year away. For one, this is Usain Bolt's last ever competitive championships, but for another, it's going to feature peak female athletes at the top of their game. Attendees aren't confirmed yet, as they need some time to recover after the Games, but it'll likely include Jamaican force of nature Shelley Anne Fraser-Price, Dutch Dafne Schippers, and the amazing USA 4x100m women's relay team. (Somewhat adorably, the ticket price for children is £9.58, to reflect Usain Bolt's 100m world record.)

Good news for those of us who don't have a TV: while big news networks will likely only feature the highlights, the IAAF, which runs the Championships, has a live stream on Youtube of all the action.

7. The Boxing Girls Of Kabul

If the refugee team in the Olympics inspired you, there are more amazing tales of hard-won Olympic places out there for you. The Boxing Girls Of Kabul, a documentary produced back in 2012, is a critical favorite: it tells the story of Sadaf Rahimi and other female boxers in Afghanistan, all of whom are training in the hope of becoming the nation's first female boxing representatives at London 2012. They fight off both a serious lack of facilities and severe societal disapproval to approach their goals. (The film's star, Rahimi, actually won a berth to 2012 as a "wild card" entry, but just before the Games started the International Boxing Association ruled that it wasn't safe for her to compete; they were concerned about her being badly injured by much more skilled competitors.)

Boxing not your thing? You might enjoy Football Under Cover instead, a fascinating documentary from 2008 about the difficult and repeatedly thwarted attempts of a pair of women's soccer teams, one Iranian and one German, to have a friendly match. Spoiler: they do eventually get to play, in a Tehranian stadium, but only after some pretty severe and at times bizarre negotiations and secretive schemes. It's a testament to the power of sport, and the sheer determination of some women who just want to get out and play.

More like this
16 Novels That Paint A Realistic Portrait Of Abortion
By K.W. Colyard
Aesop's Queer Library Is Open
By Tomi Otekunrin
Sparks Fly Fast & Furious In 'Honey & Spice'
By Bolu Babalola
At 14, Jenny Han Wrote Rom-Coms About Her Friends & Fan Mail To Leo DiCaprio
By Alyssa Lapid
Get Even More From Bustle — Sign Up For The Newsletter