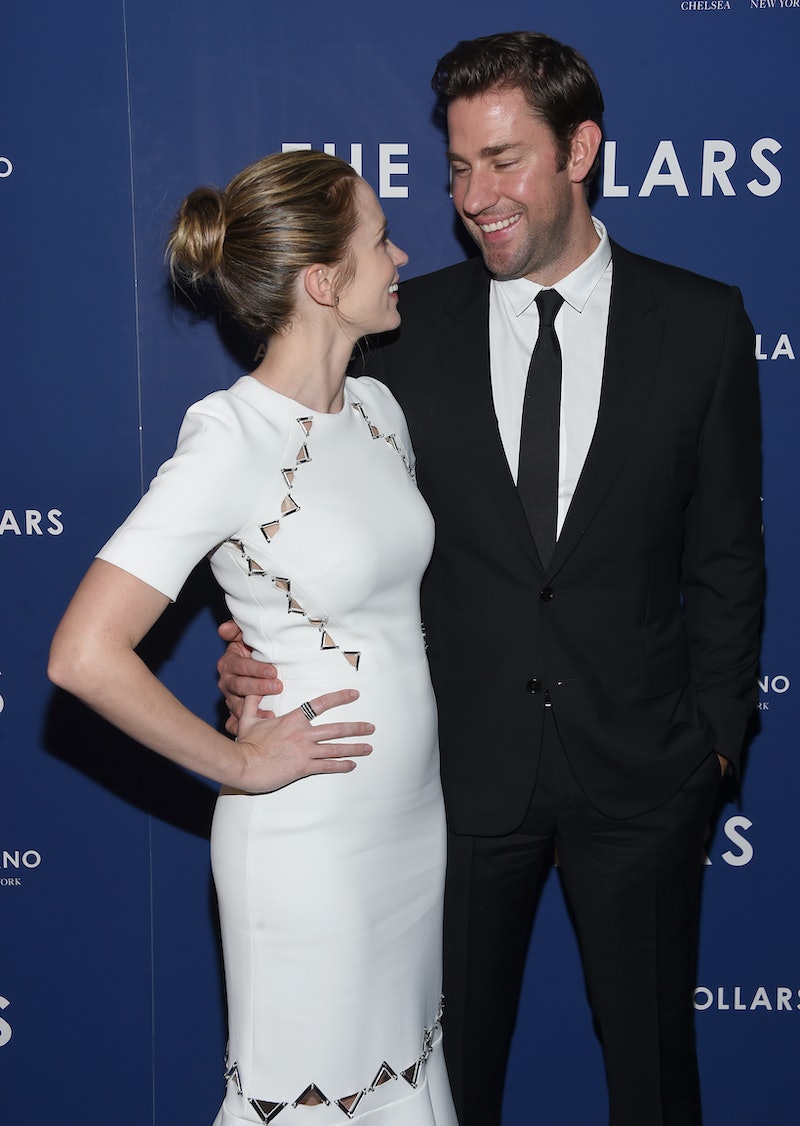 Every time I think that John Krasinski and Emily Blunt have reached peak cuteness as a couple, I am very happily proven wrong. The damage this time to my overall unrealistic expectations on what love and marriage should be come in the form of Krasinski's Monday night interview with Jimmy Kimmel, where he talked about Blunt, their daughters, and their endearing yet hilarious life at home. It's so evident that the two are the best of pals first and foremost, which makes the actor's anecdotes of their interactions that much more entertaining.

Evidence that reality show producers are missing a grand opportunity to get these two on a Kardashian-like program of their own? Despite being incredibly loving and affectionate with one another, as evidenced by any and all red carpet photos of the two, or any time they are candidly captured together on camera, or that time Krasinski just had to run out on stage to congratulate Blunt on winning an award, or — you know what, If I don't stop here I'll never stop. The point is, they've got the lovey dovey thing down, but it's their spirited rapport with one another that's really the selling point here.

The segment that would really reel viewers in to their reality show would be any incantation of the story Krasinski tells about losing a bet to Blunt over Leonardo DiCaprio's (admittedly unbelievable) age due to his youthful appearance, which resulted in a new domestic venture. The Office alum explained to Kimmel that he began his later-in-life foray into cooking "as a Mother's Day gift for Emily" and that it extended past the holiday because of some friendly competition between the spouses.

Kimmel asked what the bet was, because who wouldn't want to know the specifics, and Krasinski explained,

"The bet was Emily said something about Leonardo DiCaprio being 41. And I said, 'How dare you! And I said, 'That cherub of a man' — I think that was my quote — 'That cherub of a talent, can't be more than 28.' He's not over 40, was my thing. And she said, 'If I'm right, you have to cook for me every Sunday, and if you're right, you get play Call of Duty once a week.'"

He continued, after fist pumping, "So I thought, 'Here we go! This is the good stuff.'" He was right in one area, it was "the good stuff"... but for Blunt who is now reaping the benefits of his subpar knowledge of celeb trivia.

And if that isn't enough to hook you, their eldest daughter, Hazel, and her cunning antics at age two will probably do it. Kimmel mused, "You have two baby daughters at home, a toddler and a little baby, Hazel and Violet... Is Hazel enjoying Violet's presence in your home?"

"Yes, absolutely. She's two and a half, so she's just young enough to know that that's adorable, and I get a lot of attention when I do things like hug her, because it looks like a Hallmark card. But as long as she doesn't mess with my stuff, we're good."

From one oldest child to another, Hazel girl, you are an inspiration. But from the point of view of a longtime reality TV watcher, this is also the stuff that makes for good television. Nothing quite like witnessing a clever toddler using her baby sister to get justice for the attention that was undoubtedly divided once Violet was born. I suppose Jim Halpert's mischievous nature isn't a fictional thing, but rather a trait that is passed down through the Krasinski gene pool.

It appears that not one person, no matter how small, in the Krasinski-Blunt household is lacking charm, charisma, or cleverness and to not have them on our screens in order to get more hilarious stories of their day-to-day goings on feels so very unfair.