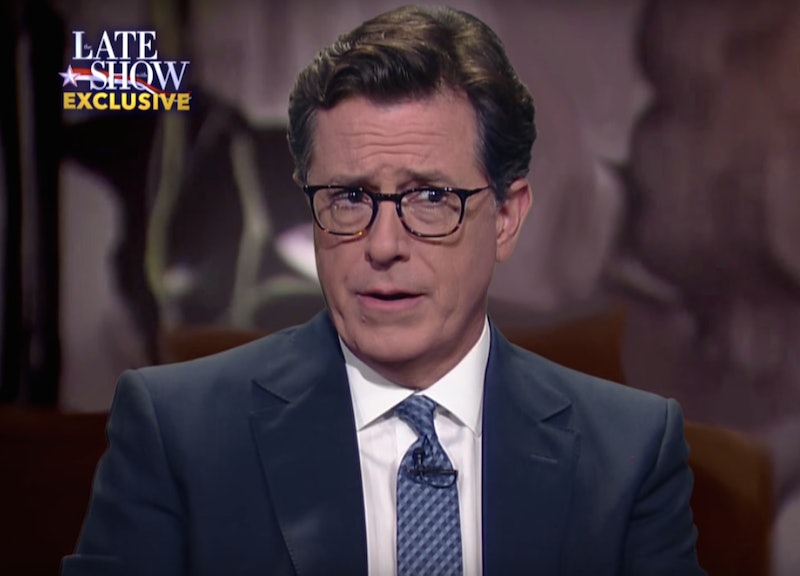 Poor Stephen Colbert. Since the Olympics have been interfering with The Late Show's air time, the host hasn't been able to do skits and bits about any of the Rio shenanigans. That is, until Monday night, when Colbert finally got to say his piece(s). And where did the late night show host start? With the biggest debacle of all: the Ryan Lochte robbery scandal. Given that Lochte had just given an interview with Matt Lauer, this was Colbert's perfect time to pounce, and pounce he did. Behold: the Lochte interview we were all hoping for, cut together, sliced up, and sprinkled with hilarity by Colbert.

If Lochte thought his Rio scandal would be put to bed after an interview with Matt Lauer, he had another thing coming — and that thing was Stephen Colbert's editing ingenuity. In the faux interview, Colbert starts off by "asking" the athlete about how life's been since the scandal. Lochte answers, “Well, since everything happened, I’ve kind of been laying low.” Colbert retorts, “If you want to lay low, television is the best place to do that.” Boom.

Then, the host continues to "ask" Lochte about how the story changed from being robbed at gunpoint to, well, not being robbed at gunpoint, and Lochte says “I over-exaggerated that part.” Colbert replies with what we were all thinking during the original Lauer interview: “That part? Okay, here’s the thing: That part is really the whole part. Without a gun cocked to your forehead, it’s really just a story about some guys urinating on a gas station. How could you get that so wrong?” Good question, Colbert, good question.

As the interview continues, the host makes "I was intoxicated" Lochte's response to most questions. So, when Stephen inquires about what we can expect at the Tokyo 2020 Olympics, Lochte simply replies, "Intoxicated." It's brilliant.

But, the commentary didn't stop there. (Did I mention The Late Show has been on hiatus?) The host had one more thing to point out before he could lay his head down to rest at night, one more thing to tie it all together: "The whole world thinks of Ryan Lochte as the crazy American with the weird hair who keeps making stuff up and causing an international incident, which is not how an Olympian acts. That's how a presidential candidate acts."

I don't know about you, but if anyone is coming out of both the Olympics and the presidential race a winner, that person is Stephen Colbert.