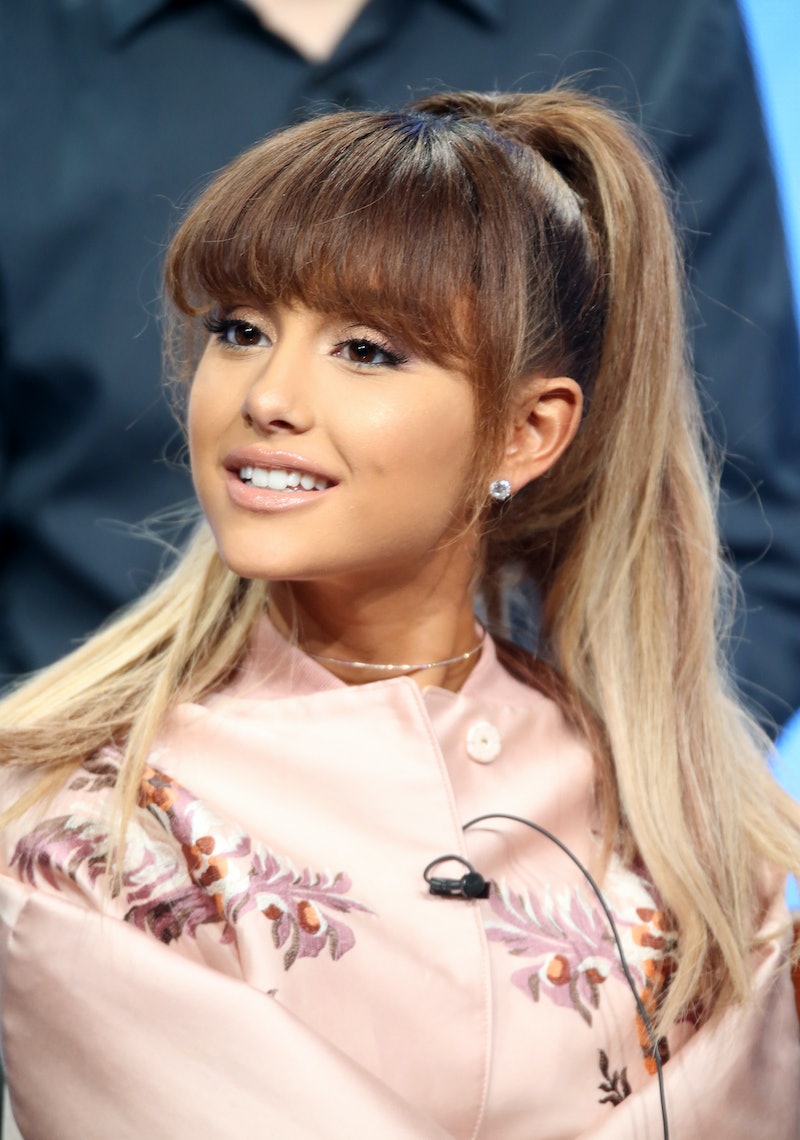 Back in July of this year, reports came out that Ariana Grande and her dancer boyfriend, Ricky Alvarez, split after a year of dating. I was struck by how low-key Grande had managed to keep her relationship with Alvarez, after the media circus of her previous high-profile boyfriend. Well, it seems like she might be back into the arms of an old friend, rapper, and collaborator... and it is not her ex Big Sean. Grande was spotted kissing Mac Miller during a sushi dinner date in Encino, California, and rumors went flying. Is Grande dating Miller now? Based on these cozy photos, some type of reconnection is certainly happening.

The rumors of Grande and Miller dating only surfaced over the past month when Grande released a remix of "Into You" with her old friend, who was also featured on her 2013 single "The Way." On Aug. 15, Grande was also seen spending time with Miller, when she accompanied him to his show at West Virginia University. And many of her fans became suspicious when she also showed up on Miller's Snapchat, and was shown sitting on his lap while going down a water slide.

Now, if you are a big Grande fan, you know that this is not the first time that she has gotten very close with Miller. Back in 2013, when Miller appeared on her hit "The Way," their chemistry in the music video got people talking, especially after they shared this steamy scene at the end of the video:

After I watched that video, I assumed they were totally together, but Miller denied any rumors of dating back then. But although he denied a romantic relationship, he had nothing but adorable things to say about his friend. In an interview with Cambio in 2013, Miller said of Grande, "She's like the greatest person in the world. She's like an angel... She's very nice. She's a sweet girl." Also following the release of the video, Miller spoke to MTV News about the rumors, and said,

"That's the homey. She's got a boyfriend and everything. Obviously, that [kiss] made everyone talk. I didn't even know that was going to happen and then we were shooting and the director was like 'This should happen' and I'm like 'Alright.' Well, she's a very, very talented singer, like she can sing incredibly... she's a great person. She's one of the nicest just people I've ever met in my life."

It sounds like they enjoyed working together a lot and that Miller really values his friendship with Grande, which looks to be taking a turn to the romantic. Isn't that the best way to start a relationship anyway? As friends first?

Along with the times they spent together earlier this month, Miller joined Grande on stage during her performance of "The Way" during her headlining performance at the 2016 Billboard Hot 100 Festival in New York on Aug. 20.

The next day, was when they were spotted kissing at Katsu-Ya in Encino, so this means that they likely traveled together from New York to California. Things could be getting serious between Grande and Miller, or you know, they're just close friends who are enjoying a little end-of-summer fling. Nothing wrong with that.

More like this
The “Rules For Dating” TikTok Trend, Explained
By Lexi Inks
Selena Gomez Joked About Her Relationship Status In Her ‘SNL’ Monologue
By Grace Wehniainen
Is Megan Fox Pregnant? MGK Gave A Shout-Out To Their “Unborn Child” Onstage
By Hugh McIntyre
Britney Spears Set A Wedding Date With Fiancé Sam Asghari & Previewed Her Dress
By Bustle Editors
Get Even More From Bustle — Sign Up For The Newsletter