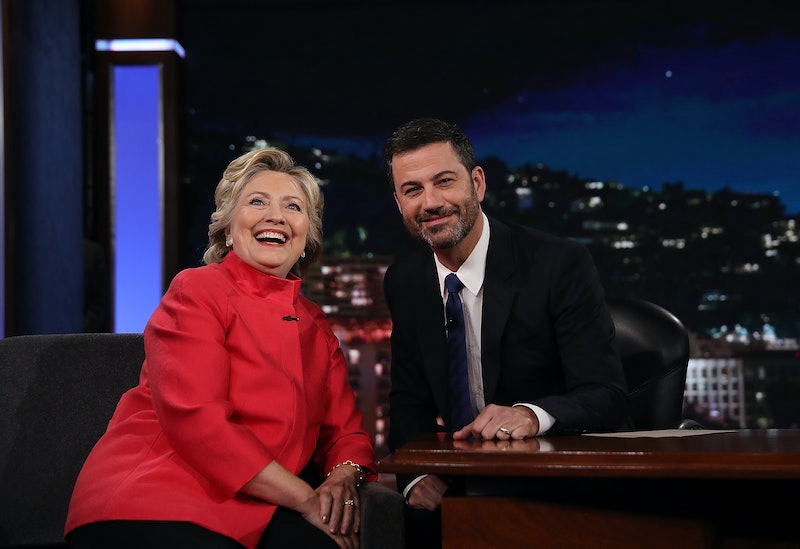 Unlike Donald Trump's campaign, Hillary Clinton's is healthy and strong. In response to Trump's recent questioning of her physical fitness for the presidency, Clinton proved that she's in perfectly good health during an appearance on Jimmy Kimmel Live. Clinton had Kimmel check her pulse and showed she could open a jar of pickles, both of which were more concrete evidence than what Trump or his surrogates have offered to back up their claims so far.

During the segment, Clinton indirectly connected Trump's claims with claims that The National Enquirer published in October, which said Clinton had six months to live before she'd die of brain cancer. Well, over six months later, Clinton is obviously still alive, and she made the savvy move of equating Trump's claims to those of the Enquirer. "I think on the one hand, it’s part of the wacky strategy — just say all these crazy things, and maybe you can get some people to believe you,” she told Kimmel. “On the other hand, it just absolutely makes no sense.”

The Trump camp has been pushing rumors about Clinton's health since his polling numbers began to decline following the Republican National Convention. At a campaign speech in Wisconsin in August, Trump stated that Clinton "lacks the mental and physical stamina to take on ISIS, and all the many adversaries we face." That same week, former New York City Mayor Rudy Giuliani argued that Clinton is showing signs of illness that are being hidden by the media. “She has an entire media empire that… fails to point out several signs of illness by her. All you got to do is go online,” Giuliani said during an interview on Fox News Sunday. The claims have remained entirely unsubstantiated by any actual evidence.

The Clinton campaign had addressed these claims before in an official statement, and pretty thoroughly debunked them. "Donald Trump is once again peddling deranged conspiracy theories in a desperate attempt to change the subject – this time with absurd and debunked claims about Hillary Clinton’s health," read the statement, followed by the statement from Clinton's doctor that declared her to be in excellent health. However, the appearance on Kimmel was still a smart move, because it lent more publicity to the ridiculousness of Trump's claims without aggravating them at all.

Maybe the most reassuring thing about the segment was the fact that Clinton was actually pretty funny. The claims about her health obviously never held much water, but Clinton has been burdened by a dearth of likability. Personality and geniality actually matter in the modern era, because of the country's near-constant access to the president through broadcast and social media. After eight years of President Obama, whose popularity and efficacy were bolstered by television appearances and YouTube videos, it's actually very reassuring to know his likely successor has the same capability of connecting with the people through media.

Clinton's casual dismissal of Trump's assertions about her health showed how little she is concerned about it, which hopefully means her campaign can move on to refocusing on the issues. With the election just over two months away, it's time to let go of the silly campaign tactics and work on how to make the country better, which is what Clinton seems to be trying to do.