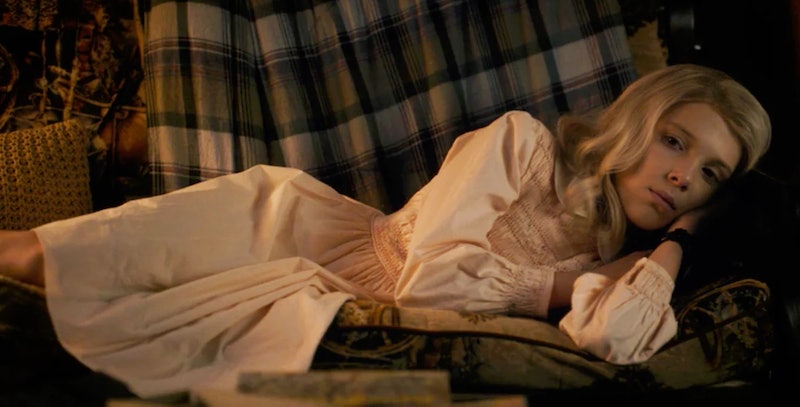 The Internet has been abuzz since Stranger Things star Millie Bobby Brown, who plays Eleven, shared a video on Instagram from when she shaved her head for the highly revered role. The buzz cut is depicted through two Instagram videos, both aptly set to Beyonce’s “Pretty Hurts” (I hope fans just read “pretty” in Eleven’s little voice). With the young actor’s most recognizable role including a shaved head, Stranger Things fans may be curious about what Millie Bobby Brown looks like in real life?

According to an essay the show’s creators, the Duffer brothers, wrote for Entertainment Weekly, Brown had long hair, “past her shoulders,” when she auditioned for the role. She and her parents were hesitant to shave her head, according to the Duffers, but Brown was able to go through with the cut because she was inspired by images of Charlize Theron in Mad Max: Fury Road (the film was about to come out when Stranger Things began shooting). The EW article describes the scene, depicted in the popular Instagram video:

When the day of the haircut finally arrived, Millie’s mom brought out a camcorder, while her dad ran away with tears in his eyes, unable to watch. It was a pretty dramatic scene. But also very quick. Within 10 minutes we had shaved it all off and slapped a fake “11” tattoo on Millie’s wrist. Millie looked at herself in the mirror, gave her best Furiosa scream — and Eleven was born.

Brown has also discussed the experience in several interviews. In an Elle interview, she said her mum (yes, she’s British IRL) was the least on board with it, but she and her dad were game. “I was like, 'Mom. You need to chill out; it's gonna grow back,'" Brown told Elle.

It seems, based on Instagram posts, that the actor's hair is currently in a cute pixie. But, what did she look like before the buzz cut?

Well, We Sort Of Already Know

Eleven did rock a blonde wig, after all — pretty.

And, The Star Is No Stranger To Wigs IRL

Growing your hair out can be such a pain.

Here She Is Just Before The Big Chop

Brown 'grammed this picture to tease the buzz cut video.

This Is Brown's Hair Now

She is rocking the short hair!

And, Here Is What Brown Looked Like Pre-'Stranger Things'

Did you know she can sing too? In the same Elle article, Brown talked about the videos of her singing on YouTube. She said, "I started singing before I started talking. And that's the God's honest truth. I think it was something that I've always loved to do, even if I wasn't good at it. I just loved ballads. And, actually, I have really bad hearing in one ear. I always thought that maybe I can't do this because of my ears. But then I sort of thought, Why not post this and share it with the world?"

And her fans are certainly grateful that she did.

More like this
6 Shows Like Stranger Things To Get Over Your Emotional Season 4 Hangover
By Kadin Burnett
Eleven From ‘Stranger Things’ Is A Cancer Zodiac Sign, An Astrologer Says
By Brittany Beringer
Natalia Dyer Opened Up About Steve & Nancy’s “Lovely” ‘Stranger Things’ 4 Dynamic
By Grace Wehniainen
‘Stranger Things’ Spin-Off Will Not Be What You Expect
By Catharina Cheung
Get Even More From Bustle — Sign Up For The Newsletter