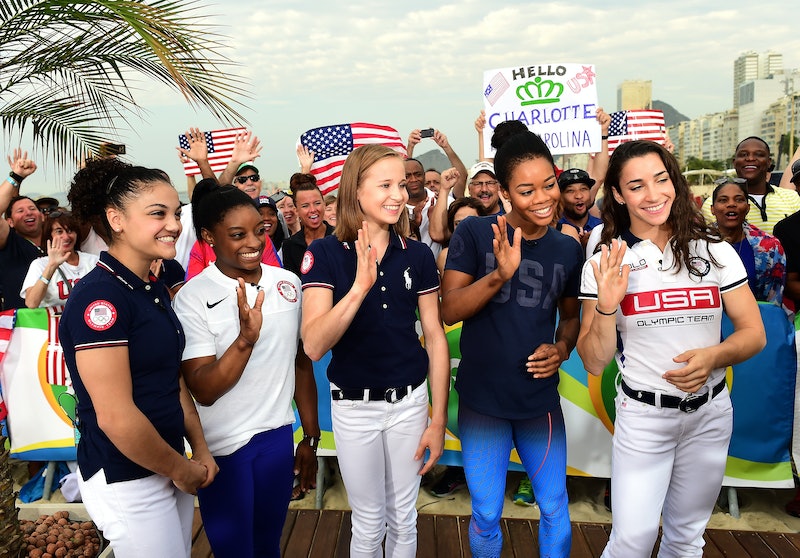 Ahem, not to be rude or anything, but in the iconic words of the famed Hilary Duff, The Final Five's love for Zac Efron is so yesterday. While the whirlwind bromance between the group and the actor (and perhaps a shred of actual romance where Simone Biles is concerned) was heartwarming and everything, there's a new object of celebrity affection in town. One who has also captured the collective attention of the gold medal gymnasts. The Final Five fangirled over Usher at the Today show on Tuesday, and it might have just overshadowed the Efron introduction.

Who can blame them, though? I still play Usher's Confessions album as if it was released yesterday. The man has been a celebrity crush of mine since childhood, perhaps even before the youngest member of the group, Laurie Hernandez, was even born. Before I have a quarter life crisis through, let's turn the attention back to the team. Biles, Aly Raisman, Madison Kocian, and Hernandez all took to their social media pages in some way, shape, or form to document the hallowed moment. Gabby Douglas refrained from posting but she was present for the photographs and looked just as enthused about it as the rest of her teammates. The excitement was so palpable, even this longtime Usher fan couldn't be mad or jealous about it.

Biles and Raisman tried to play it cool, but underneath their "NBD" exterior, was some clear disbelief over mingling with the legendary singer. The eldest of the Final Five even reposted Usher's Snapchat picture of them together where he wrote, "Olympic medalist... at least for the day! Finally, I'm the tallest one in the room." So, it's pretty obvious they weren't the only ones who were having a major fan moment.

In fact, in addition to the picture of the group, Usher snapped a video of Raisman anointing him with the gold. In the video he exclaimed, "Lucky me! Can I keep it?" And Raisman gave a hilariously resounding, "No." To be fair, I don't think she would've let the president have it either if he asked. Anyway, as the gymnast says, it's totally casual that she and Usher are sharing gold medals like a best friend necklace. So, excuse me as I live vicariously through this entire "nonchalant" situation.

Regardless of what the older girls posted though, Hernandez wasn't pulling any punches. She was loud and proud about her freak out, as one should be. Considering she just won a gold and silver medal, there shouldn't be any shame in her game.

Through all this Usher frenzy, the girls seem to have let Efron go (for now, at least). I bet the High School Musical actor is feeling some type of way about it, too. After all, losing the Final Five's full attention has to hurt.