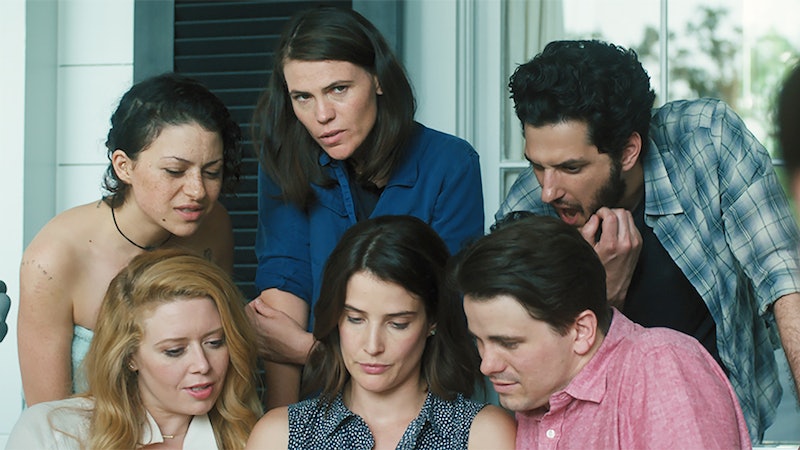 The Intervention portrays a unique kind of couples' weekend, to say the least. The new comedy-drama, in theaters Aug. 26, features four couples who come together at a summer house to enjoy a mini-vacation. The only problem? The trip is actually a setup by three of the couples to intervene on their two married friends, who they think should get a divorce. It's a wild plotline, which may have you wondering if The Intervention is based on a true story. Because, if so, you might find yourself feeling suspicious every time that some friends invite you and bae to come on a weekend trip.

Thankfully, The Intervention is a work of fiction, and there is no conflict-ridden couple upon whom the narrative was based. Actually, the story came from the mind of Clea Duvall, who directed and starred in the film in addition to writing the script. You might recognize Duvall from movies such as But I'm A Cheerleader and Argo, and shows such as Heroes and American Horror Story, but this is the first time that the actor has tried her hand on the other side of the camera. It was first announced in 2015 that Duvall would be writing and directing the movie, but in reality, the project has been in the works for much longer than that.

The 38-year-old explained to IndieWire that she first started writing in her twenties, but that none of her scripts developed into anything concrete. In conversation with a friend one day, Duvall mentioned that she had an idea for a movie about friends who do a relationship intervention, and her friend encouraged her to write it. Duvall created an outline of the story, and then began to etch it out into a screenplay over the course of several years. By the time the script was fully developed, Duvall had gained the self-confidence she needed to believe that she could direct it.

As for the story itself, Duvall told Film Independent that she drew inspiration from a time in her own life when she was overly concerned with others' relationships. She said, "There was a period where I was spending a lot of time involved in other people’s lives and relationships. I wasn’t focusing on myself enough. I had this lightning bolt of self-awareness where I realized I had been putting off a lot of my own goals and work that I needed to do. When I took to writing, this manifested from that time and those experiences."

So although The Intervention is in no way based on a true story, the idea for the movie came to Duvall as a result of her own life experiences. And now, years later, all of her creative efforts are paying off as The Intervention hits theaters.