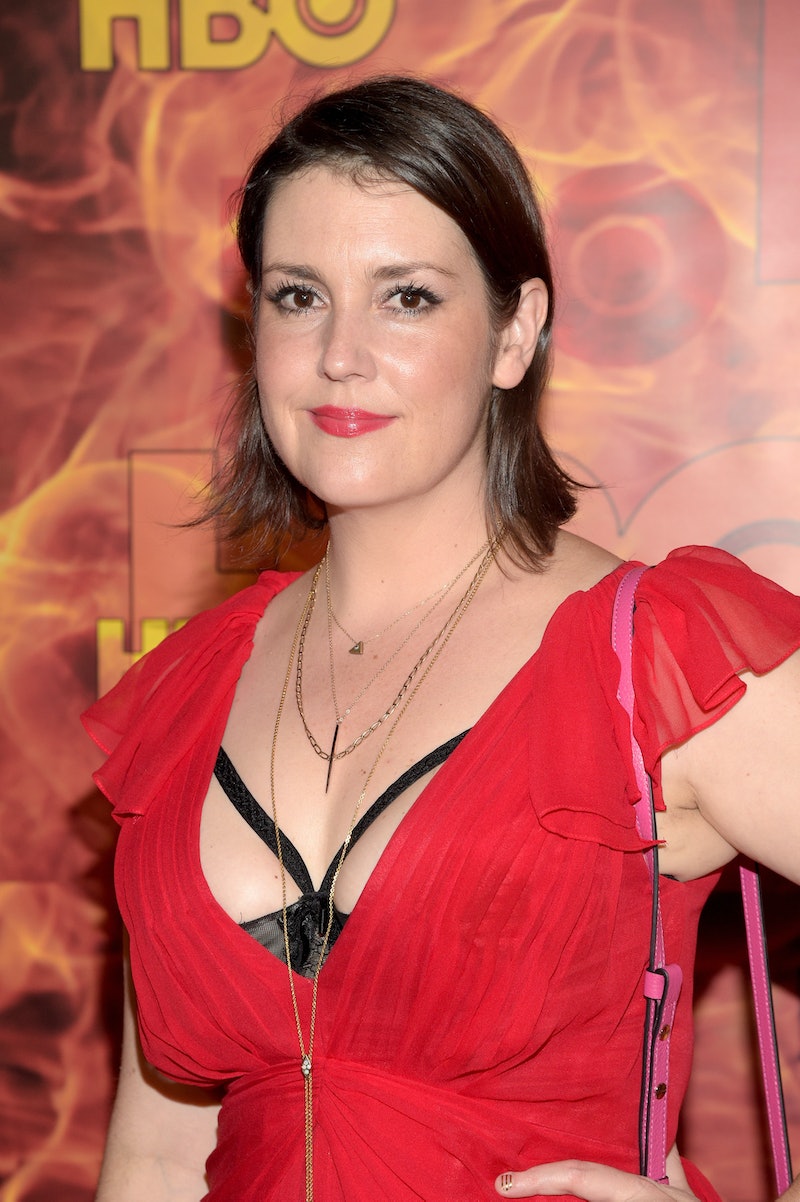 To any outsider, being an actor on the set of the Clea DuVall-directed The Intervention might sound like a dream. Working alongside a group of talented stars, living and bonding together in a house, all in order to make an ensemble dramedy as entertaining and low-key as The Big Chill? Yet while star Melanie Lynskey is the first to say that making The Intervention was often as good as it sounds, she adds that it wasn't all fun and games — particularly when it came to being directed by DuVall, her real-life best friend.

"It’s really hard for me when somebody gives me direction that’s not what my instinct is telling me. I can really protect it and I can get kind of feisty, I guess," Lynskey, recently seen on HBO's T ogetherness , tells Bustle. "I really wanted to be sure that I could protect myself and stand up for myself but also still protect our friendship. So I did a lot of therapy before, just to make sure I knew how to work with her."

Never fear — Lynskey adds that it all turned out "great," and that both stars made sure that their real-life bond "came before anything." And worries aside, the actor says that she was "so proud" to be directed by her friend, bursting into tears practically every time she saw her — which, she jokes, had to be culled before it got out of hand.

Lynskey had good reason to be excited for DuVall, a prolific actor (Girl, Interrupted; But I'm a Cheerleader; Veep) who made her directorial debut on The Intervention. The movie, about a group of friends who reunite over a weekend to stage an intervention on one couples' marriage, was a Sundance favorite when it premiered back in January, with Lynskey's performance as Annie, an alcoholic in a troubled relationship, earning particular acclaim. It's a tricky role, requiring both emotional nuance and comedic timing, and for the actor, maintaining that balance was key to playing the part.

"I just really tried to not be too over the top," she recalls. "At the end of the day, I’d just be like, 'oh my god, is it too much, is it too big? Is it annoying?'" To gain an understanding of Annie's mindset, Lynskey says that she looked to several of her sober friends, but mostly, she relied on the sharpness of DuVall's script, which called for worried discussions by Annie's friends and some harsh reflection by Annie herself. The natural chemistry between the cast, too, made a major difference; although many of the actors hadn't ever met before they started filming, working and living with such a large group immediately proved easy, Lynskey says.

"Clea and I had been working on getting the movie made for so long, and we’d had so many discussions about cast — who would be right, who would be good," she explains. "When we did settle on the cast of people, it clicked in such an amazing way, and it felt like this was always the group that was meant to be."

And working with so many talented comedians — DuVall, Natasha Lyonne, Alia Shawkat, Cobie Smulders, Ben Schwartz, Vincent Piazza, and Jason Ritter — definitely had its perks. "Ben Schwartz and Jason Ritter make me laugh the most of any people in the world," says Lynskey, which can't be a surprise to anyone who's seen the two actors on Parks and Recreation and Drunk History, respectively. Making The Intervention may have put Lynskey in therapy, but clearly, her experience on set was worth the time spent in sessions.

More like this
Ryan Gosling’s Ken Just Got The Seal Of Approval From His Partner Eva Mendes
By Rachel Mantock
At 28, Emma Thompson Was Already A Star — But Unhappy In Love, Actually
By Olivia-Anne Cleary
What That Ominous 'Selling Sunset' Season 5 Finale Could Mean For Season 6
By Orla Pentelow and Brad Witter
9 Photos Of Margot Robbie & Ryan Gosling As Rollerblading Barbie & Ken
By Alyssa Lapid
Get Even More From Bustle — Sign Up For The Newsletter