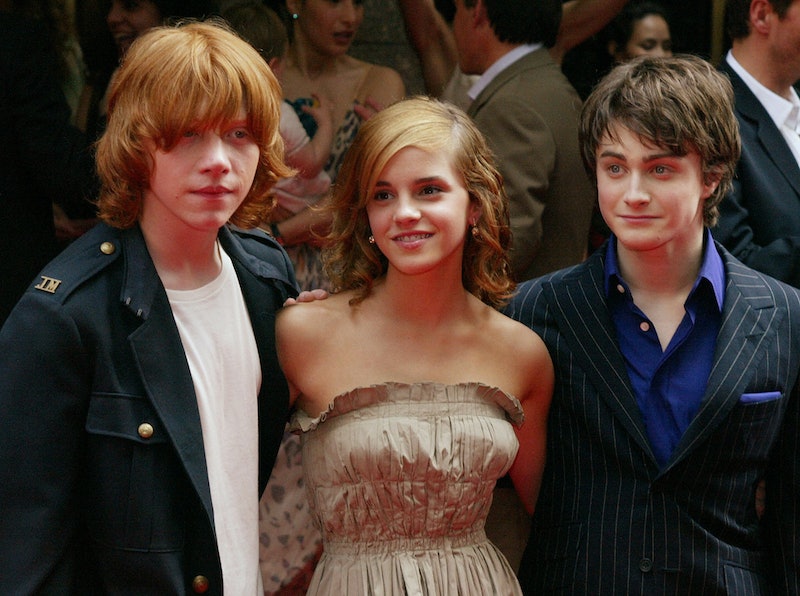 Aug. 23, 2000. A day like any other. Except for the fact that on Aug. 23, 2000, the world was first introduced to three rising stars. In London, Daniel Radcliffe, Rupert Grint, and Emma Watson who were 11, 11, and 10 years of age respectively, answered questions during the first Harry Potter press conference in their tiny, unknowing little voices. In retrospect, it was a momentous sight to be seen. Three unknown child actors that would go on to become some of biggest stars imaginable, right on the precipice of their celebrity. What's more is that the answers they gave to the press somehow perfectly fit in line with each of the three characters they would play in the Harry Potter franchise.

Radcliffe, Grint, and Watson were Harry, Ron, and Hermione before they even we saw them become these beloved characters. Shout out to the casting director for knocking it out of the proverbial park with that one. A clip from the documentary Creating the World of Harry Potter shows the three youngins walking into a room full of cameras back in '00. As Radcliffe puts it, this was the first time they all "met properly." Watson explains that she remembers being (rightfully so) "terrified" by the conference. Radcliffe then adds in "It's funny because Rupert in those days was the really chatty one, and I was very quiet" which is pretty darn similar to Harry and Ron's dynamic.

When one of the press members asks how the actors will spend their first paycheck, Watson, like Hermione, is quick to answer first, giving us what is possibly the most Hermione answer imaginable. "I'm afraid I'm really going to bore you all" she smiles, "but I'm going to stick it in a bank until I'm 21."

"Daniel, are you going to be a saver?" Radcliffe is asked. He answers coyly into the microphone, not making eye contact with anyone, "probably" and then adds "Uhm... I. No I don't have any idea." Watson audibly giggles in the background. When Grint's asked the same question he says "Well, speaking as a Wizard, uhm, we're going to get paid muggle money and I don't really understand it." Ron — sorry I mean, Rupert Grint — for the win.

When Radcliffe was asked if he shared any similarities with Harry Potter, his response was both pure gold and another thing that could have come right out of Harry's mouth. He explained being a "tiny bit" like Harry because "he'd like to have an owl." Same.

Someone also asked Radcliffe what he thought about being famous, to which he replied "It'd be cool." Such a nonchalant Harry thing to say again, am I right? Like, "I'm the chosen one but it's honestly NBD. Celebrity shmelebrity."