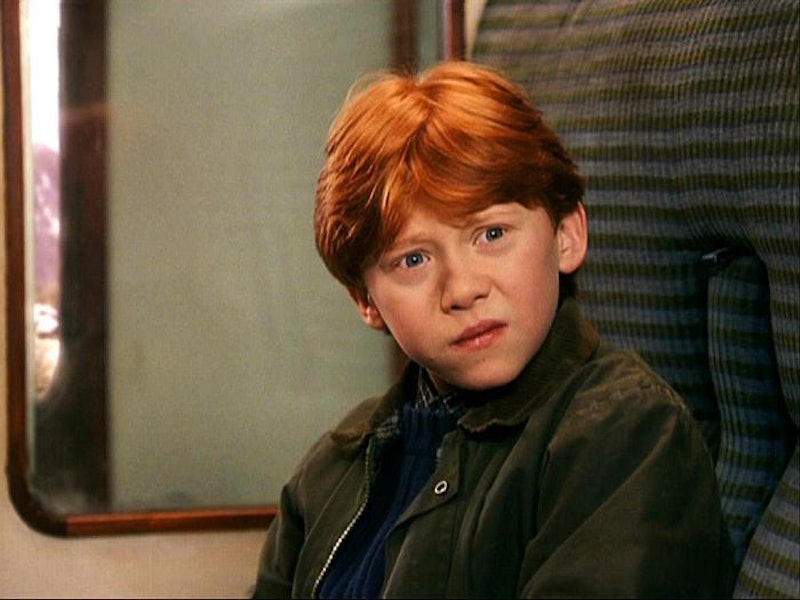 Yes, he’s one of the Golden Trio, he helps to save the Wizarding World, and he’s (mostly) a fiercely loyal friend, but… poor Ron Weasley always seems to get overshadowed by Harry and Hermione. I mean, Harry’s the main character, and Hermione Granger is Hermione Granger (enough said), so Ron’s got some pretty stiff competition for best Harry Potter character. Plus, Ron is moody. He’s a sore loser. He’s pretty dense about girls for most of the series. He has “the emotional range of a teaspoon,” according to his future wife, Hermione. And he leaves Harry and Hermione in the lurch when they’re hunting horcruxes. So why is he also the best character in the series?

Because Ron makes the biggest transformation out of any of them. Yes, Harry, Hermione, and all the rest of our Hogwarts faves grow and change over those seven books (like when Ginny transformed from a shy little lovesick dork into an athletically gifted heartbreaker). But Ron goes from an insensitive kid who’s afraid of werewolves and half-giants, who doesn’t care about house elves, and who can’t stand being in Harry’s shadow, to a mature wizard who’s good enough for Hermione (even if J.K. thinks they’d need marriage counseling). He has the farthest to go, but his impressive character development and his sharp sense of humor make him the best character of them all, particularly for these nine reasons.

1. He Shares What He Has

The Weasleys may be an old wizarding family, but Ron grew up poor. He always had hand-me-down clothes (and wands, and rats), and he was always struggling to hide his jealousy of Harry's wealth. But even though he complained about maroon sweaters and used dress-robes, Ron appreciated what he had. He loved Scabbers, even though he was old and useless and previously owned (and even though he was actually a middle-aged man in disguise). And he never hesitated to share his room in the Burrow with his best friend, Harry. He didn't mind sharing his family with Harry, either, even though he was already looked over as one of seven children.

Well... yeah. All the Gryffindor kids are brave. Even Neville is brave. But Ron doesn't just go charging into danger alongside his friends, he faces some of his personal fears.The poor kid has arachnophobia (thanks to Fred and George messing with him as a toddler... I love Fred and George, but I sure wouldn't want them for older brothers). And he still follows the spiders with Harry, and faces Aragog and his family. That takes an extra dose of courage. Plus, he lets himself be sacrificed during the chess game in Sorcerer's Stone — it takes guts to stand there and let a giant stone chessman wack you in the head.

3. He Sticks Up for His Friends

Don't let Movie Ron fool you. Book Ron always sticks up for his friends, especially Hermione. He talks back to Snape when Snape is being nasty to her, and he tries to curse Malfoy when Malfoy calls Hermione a mudblood. So what if the curse backfires and Ron makes himself vomit slugs instead? He's trying to do the right thing. He does let his feelings get the better of him sometimes, like when he yells at Ginny for snogging Dean, or when he flips out at Hermione for dating Viktor Krum (to be fair, Hermione acts pretty un-chill when Ron starts seeing Lavender Brown). Hey, we all said stupid things in high school. But on the whole, he's loyal to his friends through-and-through.

4. He Gets Over His Prejudices

Perhaps the most interesting aspect of Ron's character is that he's... kind of a bigot. At least at first. He, unlike Harry and Hermione, was raised by a magical family. This means he's great at filling in any exposition about the wizarding world that Hermione can't find in book. But it also means that he grew up with certain prejudices against werewolves, giants, house elves, and so forth. He shrinks away from Lupin as soon as he realizes he's a werewolf, and he's definitely uneasy to learn that Hagrid's a half-giant. He also doesn't get Hermione's whole thing with S.P.E.W. But Ron unlearns most of his problematic behavior. He gets over the werewolf thing and the giant thing, because Lupin and Hagrid are good people. And he worries about saving the house elves during the Battle of Hogwarts. It's not often you get to see one of the main characters of a kid's book recognize and change their own internalized prejudices.

Is Ron secretly really great at Divination? OK, probably not, but he does make several off-hand remarks that come true. In the second book, he muses that Tom Riddle might have killed Moaning Myrtle (he did). In the third book, he wonders if the large black dog Harry keeps seeing has anything to do with Sirius Black (it does). In the seventh book, he begs Harry to stop saying Voldemort's name, because it feels jinxed (it is). Throughout the books, Ron accidentally predicts what's about to happen. Granted, most of these are coincidences, but Ron does seem to have a pretty solid gut instinct. His fear of Voldemort's name seemed completely irrational, but it turned out to be very justified.

Ron often functions as the comic relief, and boy do we need his jokes. Look, I love Harry and Hermione, and both of them have the occasional zinger, but the Ron is funny friend. And his jokes are rarely mean-spirited. He's making jokes to make his friends happy, or to remind everyone to lighten up when things look bleak. Does he use humor as a defense mechanism to mask his crippling sense of insecurity? Probably. But we don't mind, because he's always there to brighten up the mood:

“Why are they all staring?" demanded Albus as he and Rose craned around to look at the other students."Don’t let it worry you," said Ron. "It’s me. I’m extremely famous.”

Alright, so he's not book smart like Hermione. He and Harry both seem to be fairly average students (and that's with Hermione "helping" them out with all their homework). But let's not forget that Ron is great at chess. He's got a strong strategical mind, when he's not being a brat or trying to diffuse the tension with his jokes. He's the one who thinks to grab some basilisk fangs for horcrux-bashing during the Battle of Hogwarts, and he's the one who tells Hermione to cast a fire spell when they're being snared by a giant plant way back in book one. He'll never be top of the class, but he's no idiot.

8. He Admits His Mistakes

Ron makes a lot of mistakes. Like... Lavender. Or being a jerk to Harry about the Goblet of Fire. Or being a jerk to Hermione about Krum. Or being a jerk to Ginny about Dean. You get the point. And sometimes it takes him a looooong time to apologize, but he gets there eventually. He seems to be more insecure and sensitive than Harry or Hermione, and he needs time to nurse his pain. But he's a good person at heart. He even asks Krum for an autograph in the end of Goblet of Fire. He gets over his jealousy and apologizes, like when Harry's almost killed by a dragon, or when he realizes he never should have left Harry and Hermione in the seventh book, because...

9. He Always Comes Back

Ron's flaws, along with his loyalty and his humor, are what make him such a great character. We can relate to him. In the seventh book, he leaves his friends because he doesn't think he's good enough. That's always been Ron's problem, and the route of his jealousy: he has low self-esteem. Harry's rich and "the chosen one," Hermione's a genius and waaaaay out of his league. But when he returns to his friends he saves Harry and destroys a horcrux, he recognizes his own worth. (Which means Hermione can finally date him, because she doesn't have time for whiny man-children.) Thank goodness for character development. Ron, you're the best.