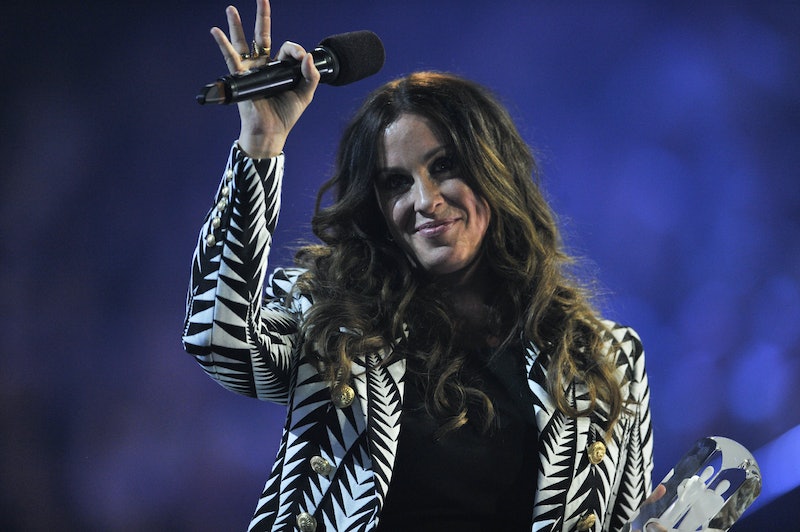 The song has become universally beloved since it first premiered but back in 1996, Alanis Morissette's "Ironic" was just breaking into the mainstream. The 1996 MTV Video Music Awards was the ceremony that cemented Morissette's status as a '90s icon, in part thanks to her iconic music video for "Ironic." But what made this such an iconic moment, per se? Well, to be fair, the 1996 MTV VMAs were a bit of a tame ceremony in the grand history of the awards ceremony. Aside from Van Halen reuniting and The Smashing Pumpkins sweeping with nine award wins, there were definitely some great moments — but nothing like Nicki Minaj-calling-out-Miley Cyrus level. They didn't even hand out the VMA Video Vanguard award that year. Say what? Let's be real, guys: Morissette arguably made the 1996 VMAs memorable thanks to her image as a female musician and the music she was making at that time.

The year before, at the 1995 VMAs, Courtney Love crashed Madonna's TV interview, making it one of the most memorable celebrity interviews of all time. It wasn't until the 1997 VMA's that the Spice Girls would pop up and literally change our lives for the foreseeable future. But the 1996's VMAs were very male-dominated, except for Morissette. But honestly, what we should care about is remembering Morissette, because she gave us the eternally great postmodern feminist album (chock full of anthems, might I add) and, of course, the very iconic "Ironic" video.

"Ironic," off Morissette's landmark debut album Jagged Little Pill (which turned 20 years old last November), was an iconic video in and of itself. Featuring four different versions of Morissette as she waxed poetic about the most ironic situations in life, it was a soaring pop/rock song that was equal parts humorous and melancholic. I mean, when someone casually spits the line, "It's like 10,000 spoons when all you need is a knife," I'm always going to reply, "Well isn't it ironic? Don't you think?"

Released after the very angsty "You Oughta Know," "Ironic" was one of the early singles the cemented Morissette's status as one of the best artists of the '90s. It's also become a song to be spoofed, updated, and it still remains a pop culture mainstay. Songs like "You Oughta Know" and "Ironic" were so quintessentially feminist in their sound and message that it's hard to imagine a world where they (and Morissette) would be iconic in their own right. They speak to the melancholy, joy, angst and heartbreak felt by women everywhere. That's how music should be.

The 1996 VMA's didn't miss a beat, making sure to recognize Morissette for all her budding musical genius, too. Not only did "Ironic" win for Best Editing in a Video & Best Female Video, Morissette won for Best New Artist in a Video. Morissette, one of the most essential '90s musicians and the most powerfully feminist during the Jagged Little Pill-era of her career, made a statement with all of her wins not only because she took the spotlight in an otherwise male-centric ceremony (sorry, Smashing Pumpkins), but she did it based on the power of her music.

Take a look below at her win for "Ironic" and revel.