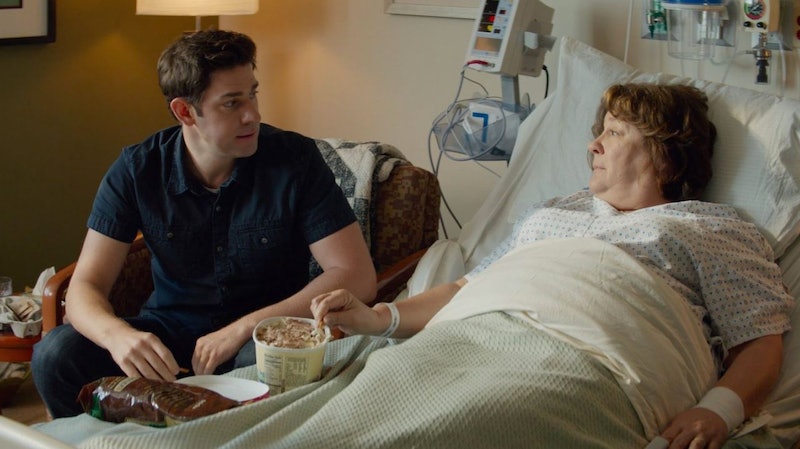 The new film The Hollars, starring John Krasinski, is rolling into U.S. theaters after making a splash at Sundance in January. The movie finds Krasinski as a struggling graphic novelist in New York City named John Hollar, who is forced to return to his small hometown when his mother is diagnosed with a massive brain tumor. Further complicating things is the fact that Hollar's girlfriend is pregnant, and he is faced with the challenge of looking towards the future while also being confronted by his past. It's a complex, deeply human narrative, but is The Hollars based on a true story?

In fact, the movie is a work of fiction. It was penned by James Strouse, known for his other fictional screenplays such as Lonesome Jim, Grace is Gone, and The Winning Season. Strouse also wrote another film that premiered at Sundance: 2015's People, Places, Things . And it is worth noting that The Hollars bears resemblance to Strouse's preceding film in more ways than one. In terms of plot, both films feature a protagonist who is a graphic artist in New York and who struggles with parenthood and larger family issues. But the two movies also share Strouse's signature writing tone.

As for Krasinski, the actor first read the script several years ago, and was struck by how deeply it resonated with him. He told IndieWire that he saw his own family in the script and was drawn to Strouse's style of storytelling. So, when the opportunity arose for Krasinski to purchase the rights to the screenplay and direct the film himself, he decided to take advantage.

From there, the project fell under Krasinski's creative direction as opposed to Strouse's, but the screenwriter told Collider that he appreciate Krasinski's dedication to preserving the story as it was written. Strouse explained that Krasinski "tweaked the script a little here and there, but was really gracious." He added that he was excited about Krasinski's casting choices, and was all around thrilled to see the film get made.

So although The Hollars isn't based on true events, a vast amount of effort was putting into creating the story. Under Krasinski's direction, Strouse's beautifully nostalgic tale comes to life.