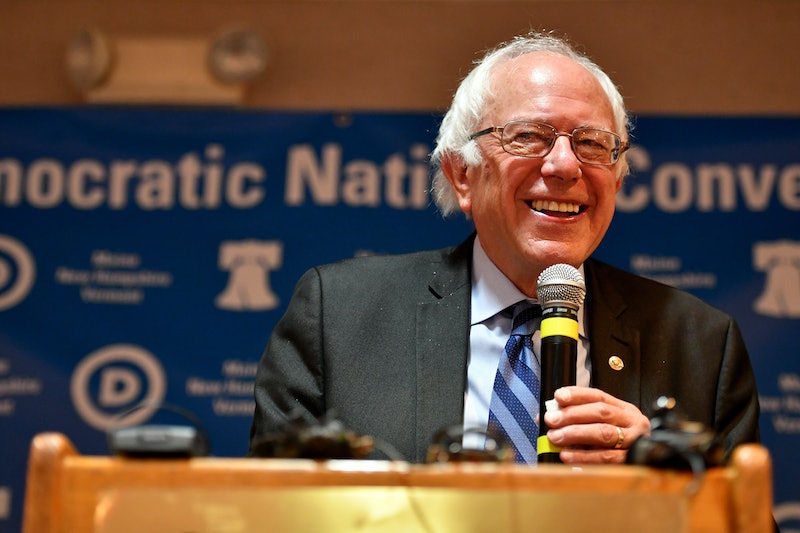 It's been one month since the Democratic National Convention, and many are still mourning the lost nomination bid of Sen. Bernie Sanders. They might be consoled to know that Sanders has started a project to keep the progressive momentum his campaign sparked going. Don't forget to stream Sanders' "Our Revolution" kickoff on Wednesday, which will feature the man himself.

Unlike a typical livestream, this video is meant to be watched with a group. There are more than 2,000 meeting places around the country, Sanders has said, where people can gather to watch the stream together. You can find one by using the link above; just enter your zip code to see if there's an event near you, then RSVP to attend. The stream starts at 9 p.m. ET, and the event pages recommend that you show up half an hour early.

The purpose of holding group events for the kickoff is likely similar to that of Sanders' initial campaign livestream in July 2015, which was not only meant to drum up excitement among supporters, but also to serve as an opportunity for potential volunteers to meet, sign up, and begin coordinating volunteer efforts. If you're unable to attend an event, though, the Bernie Sanders Progressives Facebook page is planning to stream the Our Revolution kickoff. You can RSVP to that event as well.

Though Sanders is spearheading the new initiative, it is in many respects the embodiment of Sanders' oft-repeated statement on the campaign trail that the "movement," the "revolution," is not about one man or one campaign or one election. Our Revolution aims to shift government left at all levels by supporting progressive candidates and providing educational resources to the public on political issues. It's a far-reaching, long-game approach to fundamentally transforming the political landscape of the country, and its emphasis is on educating and engaging millions of Americans, whose responsibility it is to work for the government they want to see at the local, state, and federal levels.

Of course, it's no surprise that Sanders feels called upon to be part of that educating and engaging work, continuing the excitement and the political motivation that his campaign inspired in so many. On Wednesday, you'll have an opportunity to learn more about how Our Revolution plans to achieve its candidate support and educational missions, as well as how you can be a part of the action going forward.