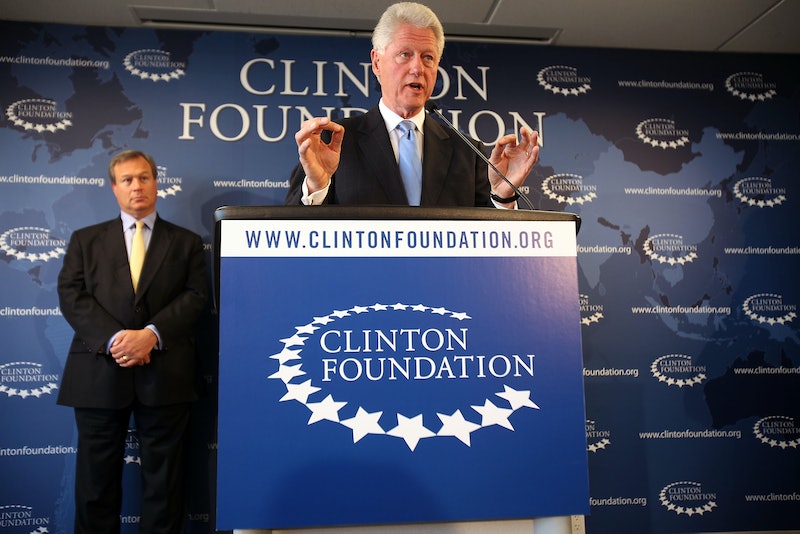 After backing off from his plan to address his reportedly shifting views on immigration, Republican presidential nominee Donald Trump has started attacking Hillary Clinton instead, particularly with claims about her family's Clinton Foundation. "I've become increasingly shocked by the vast scope of Hillary Clinton's criminality. It's criminality. Everybody knows it," Trump said at a speech in Akron, Ohio, referencing donations the foundation received while Clinton served as secretary of state. The rhetoric is overblown — he called for an investigation "immediately" — but it has many wondering. Will the Clinton Foundation be shut down?

No. As of right now, it will not. But there will be some changes if Clinton is elected in November. Former President Bill Clinton penned a letter which went live on the foundation's site Monday, Aug. 22:

The two biggest changes include Bill's role with the group and fundraising. If Clinton is elected, Bill will step down from the Foundation's board and no longer raise money for the group. The most interesting change, given the election, is that the Clinton Foundation will no longer accept foreign donations. Only American citizens, permanent residents, and American NGOs will be allowed to donate. The Associated Press first reported the move on Aug. 18.

This is the area where Clinton is under fire from Trump, especially after an Aug. 20 New York Times story on the foundation. Then the AP released another story on Aug. 23. The first line pretty much says it all: "More than half the people outside the government who met with Hillary Clinton while she was secretary of state gave money — either personally or through companies or groups — to the Clinton Foundation." The story pointed out that neither Bill nor Clinton are known to have violated any legal agreements, but it still doesn't look good.

The coverage has led plenty of news outlets, including left-leaning publications like The Huffington Post, to call on the Clintons to shutter the foundation. "Just Shut It Down" a headline on the site read. The editorial board of USA Today agreed: "The only way to eliminate the odor surrounding the foundation is to wind it down and put it in mothballs, starting today, and transfer its important charitable work to another large American charity such as the Bill & Melinda Gates Foundation."

For now, though, the foundation will continue with the changes announced by Bill, as well as a few more. On Tuesday, Aug. 23, Clinton Foundation President Donna Shalal said that some of the group's international programs would be spun off or given to partner agencies to run. "This kind of unraveling has to be done with a scalpel so that we just do not hurt people, and do not interrupt the very good work that's being done," she told NPR.

Ultimately, it might be hard for the Clintons to close the doors completely. As Bill wrote in his letter, "Chelsea and I are very proud of what the Clinton Foundation, its affiliates, and its partners have accomplished." It's hard to dismantle a project that you feel has been such a great success.