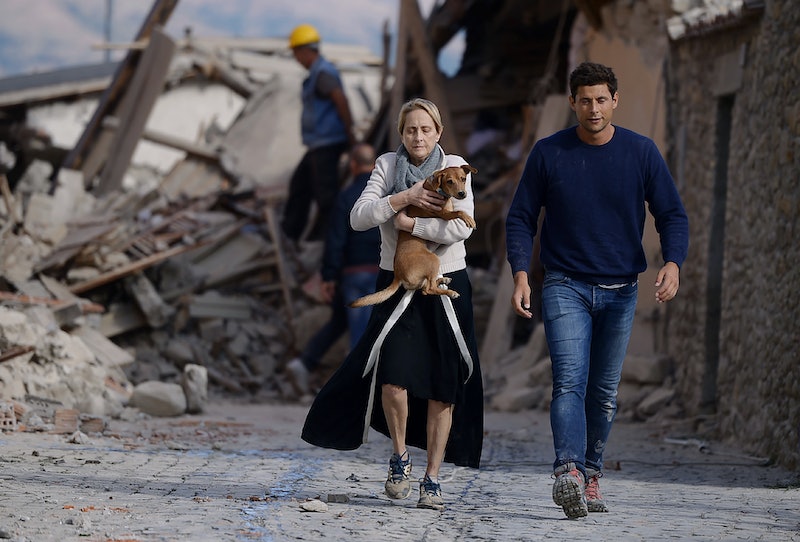 A series of powerful earthquakes throughout central Italy have left at least 68 people dead, according to the Italian civil protection agency. The initial 6.2-magnitude earthquake struck early Wednesday morning in the town of Amatrice, sending a round of aftershocks through a mountainous stretch of the European country. An estimated 40 additional earthquakes hit over the next three hours, peaking at a deadly 5.5-magnitude quake at around 4:33 a.m. local time. The quakes have left emergency crews digging with both machinery and their bare hands for the trapped and wounded, and have displaced thousands more. In the wake of this tragic event, you can learn how to donate to help Italy.

Sergio Pirozzi, the mayor of Amatrice, told the Associated Press that his town of 3,000 residents was in particular need of support. "Half of the town doesn’t exist anymore,” Pirozzi said. "People are stuck underneath the rubble. Houses are no longer there." Another civil protection worker confirmed that they are in need of all of the supplies they can get to redouble their efforts to remove victims from the rubble.

There are multiple avenues for those looking to donate their resources to Italy's rescue efforts, including giving money, blood, and goods.

If you're located in Italy, you can go to the San Camillo de Lellis General Hospital in Rieti to donate blood. The Italian province of Riati, where Amatrice is, has made an urgent request for blood donations.

If you're elsewhere, another way to show your support is through monetary donations. You can donate money to La Stampa's emergency fund, and direct your donation to "Fund 597 Earthquake in Central Italy."

3. Donate To A Charity

There are multiple charity organizations that will direct donations to the victims of the earthquakes. One such group is ShelterBox, an organization which delivers boxes of essentials to victims of disasters. The items are tailored to each disaster situation, and often include relief tents, thermal blankets, water storage and purification devices, lamps, tool kits, and toys for children. Your donation would go toward such boxes for the organization, which is already in the process of traveling to Italy.

You can also donate to the Italian Red Cross. So far, the organization has deployed rescue dogs and ambulances to the affected areas.

4. Donate To A Local Business

Several local businesses have stepped up to offer relief in the aftermath of the earthquake. The Rome Red Cross confirmed that both McDonald's and KFC have donated food to the relief efforts.

So while it's definitely important to show our support through social media, it's even more important that individuals with the means to do so direct their support to these tangible options.

More like this
Manchester Arena Attack 5 Year Anniversary
By Ella Glover
How To Fight For Reproductive Rights, Based On How Much Time You Have
By Courtney Young
Twitter Was Saying The Same Thing About Sam Ryder’s Surprising Eurovision Result
By El Hunt
Michigan’s Governor Is “Going To Fight Like Hell” To Protect Abortion Access
By Andrea Zelinski
Get Even More From Bustle — Sign Up For The Newsletter