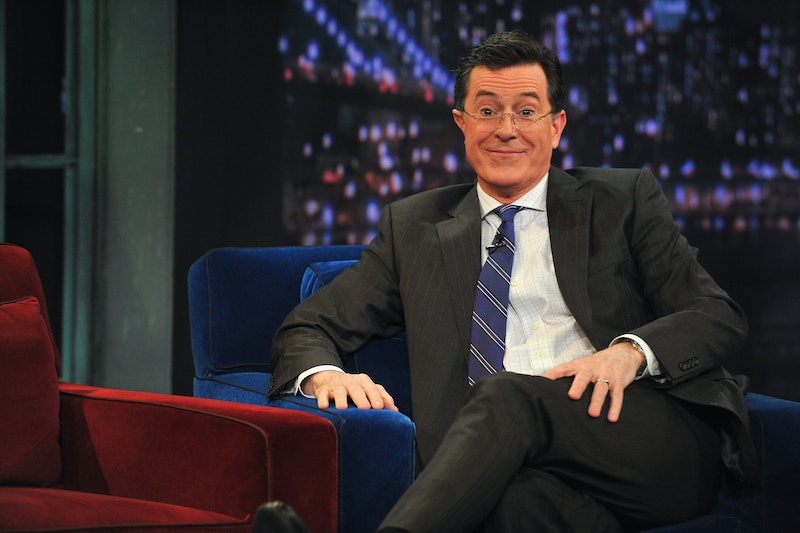 Since last week, Trump and his cronies have been more than helping to fuel the rumor machine with conspiracy theories about Clinton's health. The rumors stemmed from Clinton suffering a concussion in 2012, and some Republican demagogues (ahem, Karl Rove) turned it into not one but two conspiracy theories. The first was that since the accident happened before the Benghazi hearing, she was faking the injury in an attempt to get out of it. The second, an immediate contradiction to the first, was that this accident was so serious that she now isn't fit to be president.

Now, Colbert is firing back in defense of Clinton in the best way ever: with a clip of Trump motor-boating a dressed-in-drag Giuliani. Colbert explained Tuesday night, "I'm not surprised that he was able to diagnose Hillary Clinton so accurately without examining her — after all, Giuliani and Donald Trump are experts on female anatomy. It's true. Just look at this actual video the two of them made."

Watch the clip in all its glory:

In a way, it's too bad for Trump. There are real, substantive issues he could be going after his opponent about, like the scandal surrounding the Clinton Foundation and foreign donors during Clinton's time as secretary of state. Alas, he's choosing to stay the course with sexism, pummeling home accusations that Clinton isn't fit to be president because she's supposedly weak, mentally unstable, and low-energy. Oh, and he also says that she takes too many naps: "She will go home, she will take a nap for four or five hours, then she will come back." How Trump thinks he has any insight into Clinton's nap schedule is unclear.

Colbert is right about the true ailment Clinton's detractors are concerned about: "I don't know why [Trump people] keep saying things like 'frail' or 'weak' or 'low-energy.' You're just tiptoeing around the medical condition that you're really upset about. One that she has that no other president in history has ever faced. Hillary Clinton has chronic 'no penis' ... every woman in her family's had the same thing."