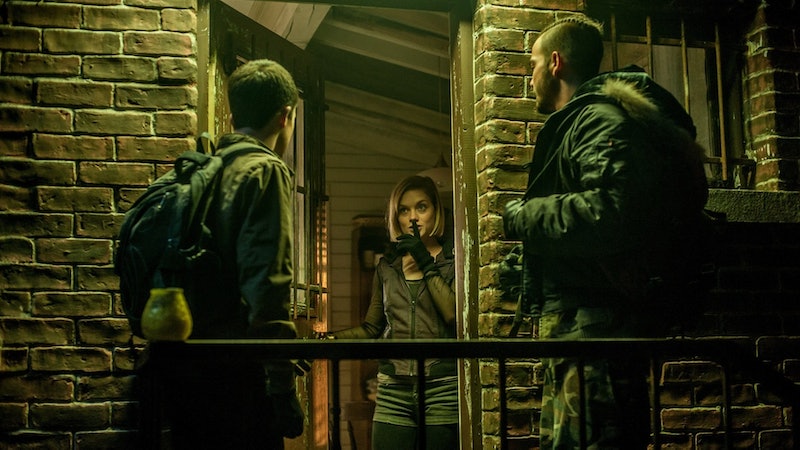 With a flurry of gruesome, supernatural horror movies flooding theaters recently, sometimes it's refreshing to get terrified by a regular ol' human. Well, keep telling yourself that. Especially if you're considering seeing Don't Breathe. The movie chronicles three teens who decide to break into a blind man's house and rob him. The only problem? The Blind Man isn't so feeble. In fact, he's quite dangerous and terrifying. Essentially, he's the prime horror villain. But is he a villain that we might see again, say, in another movie? Will Don't Breathe have a sequel?

Franchises like The Conjuring, The Purge, and now, Blair Witch have seen success from releasing sequels and beyond within the realms of the worlds created in their films. So it shouldn't be too far of a stretch to assume, then, that perhaps the team behind Don't Breathe has a sequel idea in mind. So far, no one from the film has come forward with any plans or comments regarding a possible sequel to the film. It all depends, I imagine, on how the film ends but then again, even if we do see The Blind Man die, just because someone's "dead" doesn't mean they stay dead, at least not where horror movies are concerned.

It's possible that a sequel could see the man return or it could follow (assuming they survive) the leads Rocky (Jane Levy) and Alex (Dylan Minnette) in the aftermath or facing yet another foe. Truly, the sky's the limit with horror movies — anything can happen and anyone can return. Don't Breathe is directed by Fede Alvarez, of Evil Dead notoriety. Alvarez and Rodo Sayagues also wrote the film. According to Comingsoon, when discussing the film, Alvarez mentioned how it was they came up with the idea for a blind villain. Alvarez explained,

"The blind man came from, we need an original character who was unique to be the owner of the house and the antagonist. Sometimes you naturally give them powers and make them more menacing than a normal person, so we thought what if we do the other way around and take his eyes out and make him a blind person. So suddenly that really sends everything to a different level."

In the same interview, Alvarez said "who knows what I will do next." Perhaps the studio is waiting on box office numbers before greenlighting a sequel. Perhaps Alvarez has already told the story of The Blind Man and wants to leave it be. Perhaps eventually another story within the Don't Breathe realm will come along. Until then, however, we'll just have to settle for seeing Don't Breathe when it hits theaters on Aug. 26.

More like this
Michael & Kathleen Peterson’s House From ‘The Staircase’ Has New Owners
By Kadin Burnett and Kayla Blanton
The 'Hocus Pocus' Sequel Finally Has A Release Date & It Makes Total Sense
By Shannon Barbour and Radhika Menon
Watch The Dramatic First Trailer For Netflix's Jennifer Lopez Documentary
By Alyssa Lapid
What Does Doctor Strange’s Third Eye Mean?
By Arya Roshanian
Get Even More From Bustle — Sign Up For The Newsletter