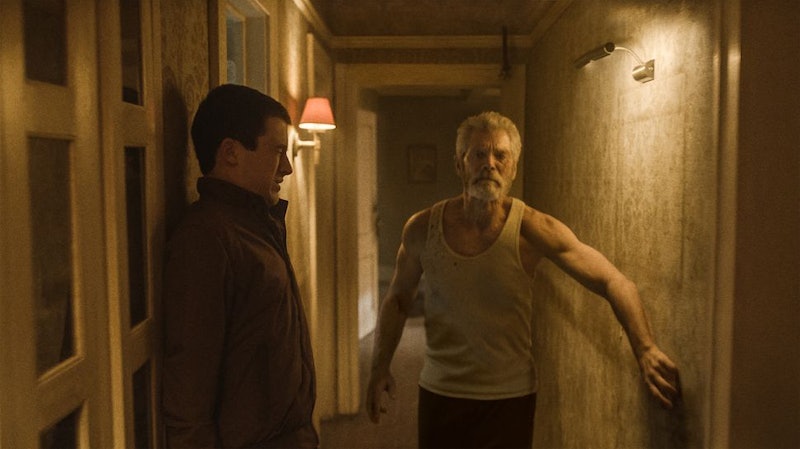 This year has not been kind to moviegoers who scare easily. 2016 will likely go down as one of the most frightening years at the cinema in recent memory, with a number of scary films already entering the conversation of greatest ever. The Witch made colonial New England feel terrifying and helpless, 10 Cloverfield Lane pushed the limits of suspense and isolation, and Lights Out managed to make the world's scariest short film into a very frightening full-length feature. But the year's not yet over, and there's still plenty of horror films left to premiere. Like Don't Breathe . But how does this film stack up against the competition? Is Don't Breathe scary?

Don't Breathe falls into the category of films that late screenwriting guru Blake Snyder would categorize as "Monster in the House." A trio of teenage would-be robbers break into a blind man's home hoping to steal from his safe, but quickly discover he's not the easy mark they assumed when he kills one of them and starts stalking the remaining two. While the fact that the teens got themselves into this mess by trespassing is perhaps a less scary idea on the surface than something evil lurking in your own house, like in the 2012 film Mama , the movie still builds masterful tension and suspense with the game of cat and mouse — which would seem to make it very scary indeed.

And so far, critics seem to agree. As of this writing, the film boasts an impressive 88 percent score on Rotten Tomatoes, with the consensus reading: "Don't Breathe smartly twists its sturdy premise to offer a satisfyingly tense, chilling addition to the home invasion genre that's all the more effective for its simplicity." The twist, of course, is that the home invaders are the protagonists rather than the antagonists, but that only adds to the fear. And that's what writer-director Fede Alvarez was going for when he conceived of the film. Everyone has had that feeling of unease when going somewhere they know they shouldn't, and maintaining that feeling for an entire movie is definitely enough to frighten even the most hardened horror movie buffs.

So if the idea of trying to sneak around a murderous stranger's house in the middle of the night, when he knows you're there, sounds scary to you (and it should), then you'll definitely find some thrills in Don't Breathe.