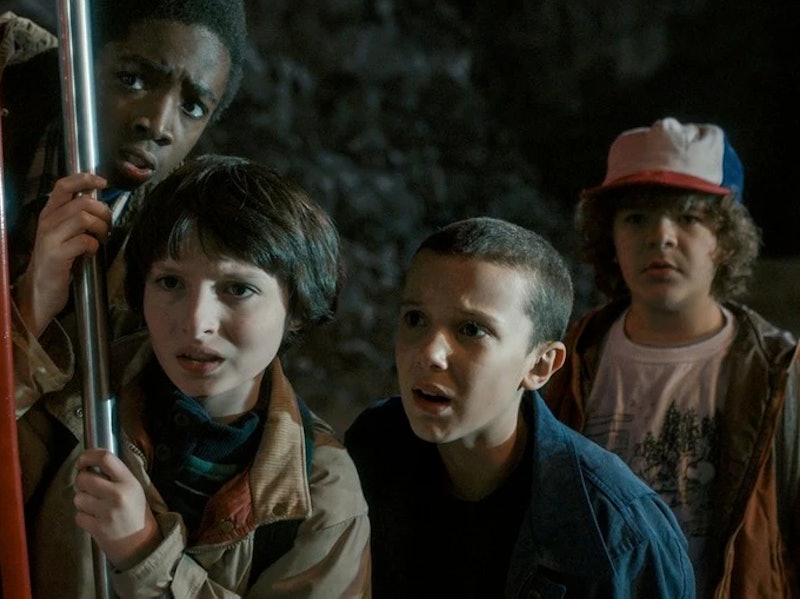 When viewers first met the Stranger Things gang in Episode 1, the boys were playing Dungeons & Dragons in Mike’s basement. [Spoilers Ahead] And, Will’s suspenseful, unsuccessful role meant his protection spell failed him against the Demogorgon — which is foreshadowing because Will was then stalked and captured on the bike ride home by a nameless monster. Later in the series, the monster is referred to as a Demogorgon, like the D&D monster, but is the Stranger Things monster actually a Demogorgon? And, what is a Demogorgon anyway?

According to Romper, D&D literature states that the Demogorgon is a powerful demon prince and "one of the most terrifying of monsters" in the game, to boot. The Romper piece explains that the Demogorgon allegedly has origins in the Latin poem “Thebaid,” attributed to a fourth-century Christian scholar Lactantius Placidus. The figure in the game doesn’t actually look like the pedal headed, blood-thirsty humanoid in the TV series. So, why did it take on the D&D name, other than the boys’ penchant for the game?

In the series, Eleven used the D&D wizard figurine and the Demogorgon — and the upside down board — to explain the Upside Down and the monster. This lead to the kids calling the monster the Demogorgon. But, there was also a psychological reason the kids start to use this name: Fear of the unknown.

One of the most terrifying things about any movie monster is its element of surprise. This unknown is terrifying. In order to have the courage to defeat the monster and save Will, the kids had to start to conceptualize it — and give it a name. But, this is also risky because the monster is not a Demogorgon. The kids can’t make assumptions based on the monster in the game about what motivates or maims the dimension-shifting beast.

This mystery and the kids figuring out the monster in step with the audience is what makes Stranger Things a brilliant show. The Duffer brothers, the show’s creators, spoke to Variety about the monster and what went into crafting a terrifying beast. Matt Duffer explained that the duo used Steven Spielberg’s “Jaws approach.” He said, “It was the same approach we had with the monster, that sort of Jaws approach — hint at it but don’t show much, so you have somewhere to go.” The article also reported that the brothers were inspired to create a “humanoid” monster because of H.R. Giger, Guillermo del Toro, and Clive Barker’s work.

Ross Duffer added that while the monster’s world has not been divulged, they have “30-page document” that explains the monster and the Upisde Down. So, while the characters on Stranger Things are working to make sense of it all, there is an intact universe that they are discovering, and fans are piecing it all together with them. Matt then explained to Variety that the terms the kids use to make sense of the other realm is what helps build suspense.

"We only know and refer to [the rift] as the Upside Down because that’s what the boys decide to call it. Everything they’ve learned about it is kind of hypothetical. They’re theorizing based on their knowledge from fantasy gaming and their science teacher, Mr. Clarke. That’s as much as we get to understand it. I think part of it is us thinking in terms of horror, it’s scarier when you don’t fully understand what’s happening. If you were to encounter something from another world or dimension, it would be beyond comprehension.”

So, what do fans and the kids really know about this monster? Apparently, not a lot. Not even its name. (Does anyone else have chills?) Bring on Season 2.

More like this
20 Photos From The 'Stranger Things' Season 4 Premiere To Make You Feel Old
By Alyssa Lapid
Oops! The 'Stranger Things' Monopoly Game Has Spoilers For Season 4
By Alyssa Lapid
10 Eurovision Moments That Celebrate The Weird & Wonderful Camp Extravaganza
By Sam Ramsden
Grey's Anatomy Fans Refuse To Accept Kaimelia's Shocking Relationship Update
By Brad Witter
Get Even More From Bustle — Sign Up For The Newsletter