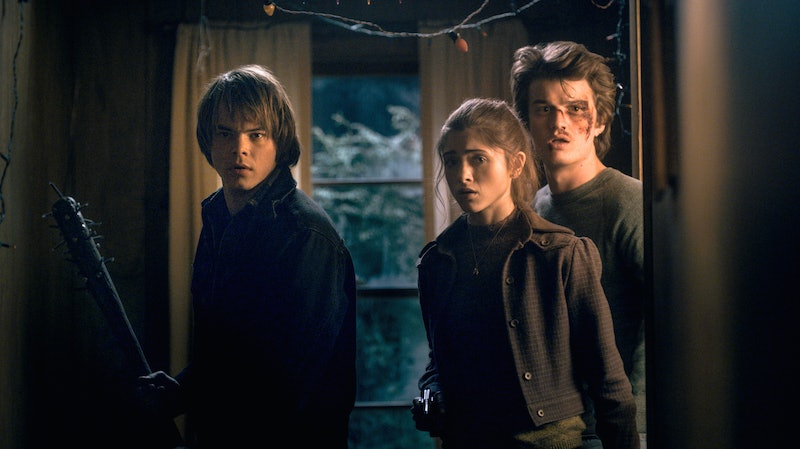 Season 1 of the Netflix series Stranger Things lived up to its title with a mysterious young girl and a frightening monster all in the town of Hawkins, Indiana. By the time the first eight-episode season came to a close, was the monster dead on Stranger Things ? Spoilers for the entire Season 1 of Stranger Things follow. Nancy, Jonathan, and Steve did their best to try to kill it with bear traps and other weapons in "Chapter Eight: The Upside Down," but to no avail. Eleven stepped in after the being from the parallel world of the Upside Down entered the school and used her supernatural powers to destroy the Demogorgon.Tragically, she disappeared alongside the monster, but since there is hope that Eleven survived the encounter, could that mean the monster also lived?

While I have hope that Stranger Things will bring back Eleven, I'm simultaneously filled with dread that if she comes back, that will also mean the return of the Demogorgon. Since police chief Hopper was shown leaving Eggos in the woods, that means Eleven is most likely alive (the waffles were her favorite food from Mike's house) and if Eleven could survive what happened to her, doesn't that kind of mean that the Demogorgon also could have lived through the experience?

Even if this particular Demogorgon did die from El using her powers on it, I started to wonder if there could be plenty more monsters where it came from. Since I suspect that Stranger Things only showed viewers a small part of the Upside Down, I initially assumed that meant there would be many more creatures with bad intentions residing down there when (not if) Season 2 happens. Yet, in an interview with Variety, creators Matt and Ross Duffer (credited as the Duffer brothers) appeared to put the kibosh on that theory about other monsters existing in the Upside Down. As Ross Duffer said:

There's a lot there we don't know or understand. Even with the Upside Down, we have a 30-page document that is pretty intricate in terms of what it all means, and where this monster actually came from, and why aren't there more monsters — we have all this stuff that we just didn't have time for, or we didn't feel like we needed to get into in Season 1, because of the main tension of Will.

How I'd love to get my hands on that 30-page document about the mythology of the Upside Down! But what can be taken from these comments is that along with it seeming like there won't be similar monsters from the Upside Down making an appearance on Stranger Things in the future, the showrunners also insinuated that the monster is very much dead. While talking about Eleven's fate to Variety, Matt Duffer said, "Obviously something happened to her when she destroyed and killed that monster and we don’t know what [sic] she went."

Based on the twists and turns the Duffer brothers provided on their series Stranger Things, I'm not necessarily ready to trust anything they say at face value just yet, but their words do seem to put an end to conspiracy theories about the monster — kind of. Even without the show being renewed yet, there's already a theory that Will could become the monster after his week spent in the Upside Down. While that's a pretty depressing thought, I'm also hopeful that the series won't necessarily have a Demogorgon-like being in Season 2. The world of Stranger Things was rich with mystery and though the series felt familiar with its multiple nods to other works, it also felt wholly original. Because of that, I'd love to see where else the Duffer brothers could take this story without necessarily rehashing the plot of the Demogorgon. Yet, it seems unreasonable to think that Will won't have lasting effects from his time spent with the monster in the Upside Down.

Wherever the monster went to, it seems quasi-safe to say that it's probably dead, but that just because it's dead doesn't mean it's the end of its reign of terror. And though I may be wondering where the hell that monster went to when it erupted into millions of tiny, black specks, I'm far more concerned with where my girl Eleven is.