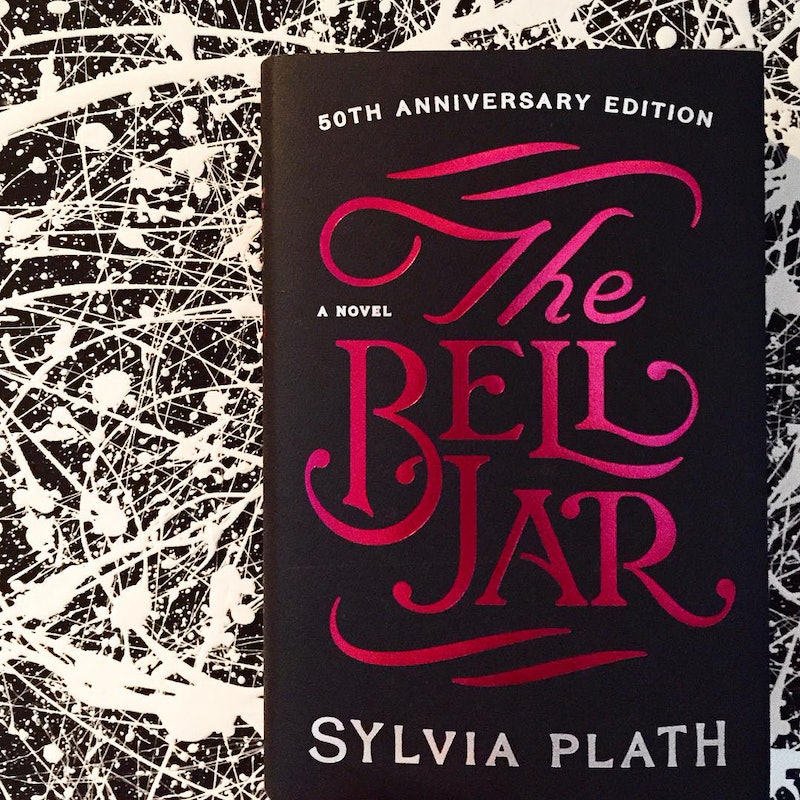 I decided to read The Bell Jar because I was sad. Not just sad: gloomy. Like a cloud of non-specific melancholy had descended over every aspect of my life. I was on the rocks with my boyfriend. Two of my three jobs were starting to grate. All of my free time was going into rehearsals for a "movement-based" devised theatre piece that wasn't to my taste. I missed my college friends. I was bitter and jealous over acquaintances on social media who seemed to be dripping with Twitter followers and living glamorous, artistically fulfilled lives.

In short, nothing was wrong. Not really. I was loved and employed, physically healthy, involved in some kind of vague artistic endeavor. Everything was fine. And that just made me sadder: I had no right to be sad, not when there were people in the world with real problems. So I decided to lean into it and start reading Sylvia Plath, the author we have culturally elected as Sad Girl in chief (this was the same week I decided to watch the movie Heathers while drinking wine in the bathtub with my laptop perched on the toilet).

So I decided to lean into it and start reading Sylvia Plath, the author we have culturally elected as Sad Girl in chief.

I figured that The Bell Jar would be good for wallowing. It was about a whiny privileged girl having a breakdown, right? The Catcher in the Rye for girls? Moody pontificating on the pointlessness of it all?

So I bought my copy (the one with the feet on the cover and the author's name in precious pink). I started to read. And by page one I realized that I had The Bell Jar all wrong.

First off, it's funny. Devastatingly funny. Esther Greenwood is a scholarship girl at a prestigious New York magazine internship and Esther is, as she puts it, "supposed to be having the time of my life." Only she's not.

It was like Sylvia Plath was broadcasting every thought I'd had between freshman and junior year of college, only with a better grasp of poetic imagery. The book is, after all, based on Plath's real life experiences as an intern for Mademoiselle magazine. Just like Esther in the book, Plath did once singlehandedly eat an entire bowl of caviar meant for the whole table.

It was like Sylvia Plath was broadcasting every thought I'd had between freshman and junior year of college, only with a better grasp of poetic imagery.

And Esther doesn't just eat all the caviar, she spends two whole pages detailing her anxiety over whether or not she's committing a social faux pas by eating all the caviar. Then she waxes poetic about the avocado halves stuffed with crab meat, while trying to avoid conversation with her fellow interns.

Esther loves to eat. When she goes out with her cool friend, she feels "wise and cynical as all hell." She's a gawky 5'10", and frustrated that all the boys seem to be shorter than her. She has to hastily exit an apartment when her friends start sloppy-making-out in front of her. She is that all-too-relatable blend of arrogance and insecurity, anxiety and humor, sarcasm and a love of snack foods that makes up almost every girl on the verge of her twenties.

I kept waiting to find myself annoyed at Esther, to see her problems as petty, her voice insipid. Or at least, to find her sadness tragic and romantic, an operatic ode to melancholia. But no: every page only drew me deeper into a very real young woman's struggle with depression. After all, who among us doesn't identify with that famous "fig tree" quote, in our darkest moments of full-blown quarter-life crisis?

I saw my life branching out before me like the green fig tree in the story. From the tip of every branch, like a fat purple fig, a wonderful future beckoned and winked. One fig was a husband and a happy home and children, and another fig was a famous poet and another fig was a brilliant professor, and another fig was Ee Gee, the amazing editor, and another fig was Europe and Africa and South America, and another fig was Constantin and Socrates and Attila and a pack of other lovers with queer names and offbeat professions, and another fig was an Olympic lady crew champion, and beyond and above these figs were many more figs I couldn't quite make out. I saw myself sitting in the crotch of this fig tree, starving to death, just because I couldn't make up my mind which of the figs I would choose. I wanted each and every one of them, but choosing one meant losing all the rest, and, as I sat there, unable to decide, the figs began to wrinkle and go black, and, one by one, they plopped to the ground at my feet.

Oof. A little too close to home. Although it's too bad that this quote is always presented without the context that follows on the very next page, when Esther sits down for dinner with her disappointingly short date:

I don't know what I ate, but I felt immensely better after the first mouthful. It occurred to me that my vision of the fig tree and all the fat figs that withered and fell to earth might well have arisen from the profound void of an empty stomach.

Except for the occasional cringe-worthy remark about race and some antiquated mental health treatments, The Bell Jar could have been written today. Esther was a sad, anxious young person before it was fashionable; a hugely talented, well-educated scholarship kid grappling with depression before we knew much about the mental disorder. Even Esther's love life, and her no-labels relationship with her kind-of boyfriend Buddy, could easily fit into a disapproving think piece about millennials.

When Buddy makes her mental illness all about him, visiting Esther at the asylum to ask if he's the one who "drove her crazy," the reader, like Esther, can only laugh. So much has changed since Sylvia Plath wrote The Bell Jar in 1963 (she wrote it in 70 days, I might add). But insensitive fuck boys are eternal.

So much has changed since Sylvia Plath wrote The Bell Jar in 1963. But insensitive fuck boys are eternal.

Of course, Esther does attempt suicide in the book. Her sadness runs deeper than a general 20-something malaise. But there is no glamour, no romance in her mental illness, or in her suicide attempt. Plath's writing goes from dry and witty to harrowing, choppy—almost a dreamlike retelling of being rescued from the brink of death, and undergoing treatment at an institution. But even that wasn't the One Flew Over the Cuckoo's Nest horror story I was expecting.

The Bell Jar isn't just a book about depression. It's about recovering from depression.

Sylvia Plath committed suicide shortly after The Bell Jar was published. That tragic fact has overshadowed her actual writing, her life, her philosophy. We've warped her illness into something romantic. Sylvia Plath has become the dark reflection of the Manic Pixie Dream Girl: the "Sexy Tragic Muse," as some call it.

I bought that image of Plath, before reading The Bell Jar. I was ready to break out the heavy eyeliner and listen to Mad World on repeat, but I was wrong. The Bell Jar is a classic that inspires so much more joy that its reputation lets on. Yes, it is an unflinching look at mental illness. But it ends with hope, not despair.

The Bell Jar is a classic that inspires so much more joy that its reputation lets on. Yes, it is an unflinching look at mental illness. But it ends with hope, not despair.

After all (spoiler alert), Esther doesn't stay in the titular "bell jar," numb to the world outside. She recovers. She learns to live again. It's not perfect, of course; she doesn't quite ride off into the sunset. Her sort-of boyfriend turns out to be a jerk (aren't they always). Her future is still full of questions, but her red wool suit is as "flamboyant as her plans."

On the very last page of the novel, Esther is about to enter her final mental evaluation, to determine if she's well enough to be released from the institution. She views it as a sort of rebirth: "There ought, I thought, to be a ritual for being born twice—patched, retreaded and approved for the road..."

As far as helping me wallow in self pity, The Bell Jar utterly failed. But it succeeded in driving home the lesson that we shouldn't judge books on hearsay. For all that it is considered a "sad book" by a "tragic author," The Bell Jar revolts against its own reputation: it is sad, yes, but also fiercely funny and defiantly hopeful. Plath's own fate should not undermine the message of her book: that it is possible to leave the bell jar. It's not a book about flirting with death, but about preparing for rebirth.

More like this
10 Equally Romantic & Heartbreaking Books From British & Irish Authors
By Shahed Ezaydi
Delia Cai’s Small-Town Romance Goes Beyond The Tropes
By Samantha Leach
Jessica Simpson On The Time She Was Pursued By A Backstreet Boy & An *NSYNC Member
By The Editors
Netflix Shut Down 'Bridgerton' S3 Rumours About A “Very Dark” Storyline
By Bustle
Get Even More From Bustle — Sign Up For The Newsletter
From hair trends to relationship advice, our daily newsletter has everything you need to sound like a person who’s on TikTok, even if you aren’t.