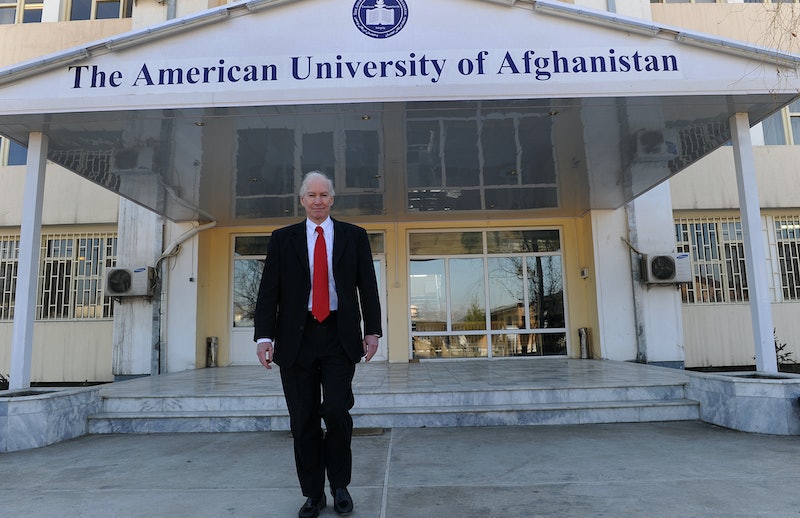 The American University of Afghanistan in Kabul reportedly came under attack on Aug 24, with gunfire and explosions reported, leaving students and faculty trapped in the school. Officials are still responding to the ongoing scene, but witnesses to the attack — including Pulitzer-Prize-winning photographer Massoud Hossaini, who was inside the college when the gunfire began — have tweeted about the dangers of the situation. But despite the clear threat to both students and faculty, some have taken to social media to give the wrong response to the Afghanistan attacks: "Why is there an American university in Afghanistan?" This question is completely not the way to approach this situation.

In the wake of the attack on the campus, which has reportedly left at least five people hospitalized so far, people have tweeted their disbelief. They're not in disbelief that such a heinous attack could occur; rather, they are using social media to deliver some "tongue-in-cheek" commentary about the horrific incident.

People are asking why an American university would be in Afghanistan, as if this explains the reason behind the attack, and that it was only a matter of time before something like this would occur. No group has yet claimed responsibility. The school's program is modeled after a U.S. teaching style (the classes are more liberal and follow American schools' semester schedules), and it receives funding from the United States Agency for International Development at the behest of former First Lady Laura Bush.

A similar sentiment was expressed throughout social media earlier this month, when an American citizen was kidnapped near the university:

Near-identical tweets littered social media following Wednesday's attack on the school. One user seems to sarcastically say, "Islam is a peaceful religion," with an article addressing the attack shared underneath. Another asks, "Who would want to go to college in such a dangerous area?" Some also incorrectly seem to believe it's connected to the Washington, D.C.-based American University.

But this type of response completely misses the point. Using a tragedy to espouse one's prejudiced beliefs about Islam is, by nature, Islamophobic. People shouldn't use the lives of those in danger to prop up their ignorance about a religion. Likewise, it completely disregards the fact that everyone, no matter where they live, has the right to a safe education.

These responses, therefore, are based around the idea that some people are undeserving of those rights, and perhaps even moreso when they take on the American name — as if no one should dare to have an American university in the Middle Eastern country. This sentiment, of course, is entirely incorrect.