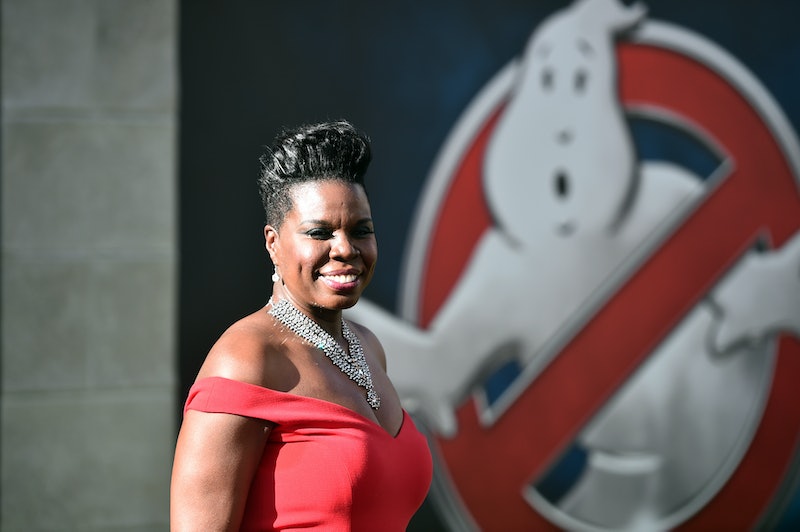 Unfortunately, Leslie Jones can't escape the sad and harsh reality of the online world. On Wednesday, the New York Daily News reported that Leslie Jones' website was hacked resulting in the leak of personal information and private photos. Reportedly, the anonymous person or persons responsible "exposed a series of nude photos," revealed her license and passport photo information, and a video of Harambe, the gorilla who was shot and killed at the Cincinnati Zoo in May, was posted at the top of her website. Bustle has reached out to Jones' rep for comment, but did not receive an immediate response.

According to TMZ, the Ghostbusters star's representation has taken down her website. In her Twitter profile, she has a website listed, which directs fans to a Tumblr page. It is titled, "Just Leslie," but if you click on the hyperlink the website no longer exists. A page comes up reading, "There's nothing here," and continues, "Whatever you were looking for doesn't currently exist at this address." Variety reports that the Saturday Night Live comedian's website "Just Leslie" was the website hacked and claims the photos came from her iCloud account.

This is the second major horrific incident that Jones has faced online during the summer of 2016. In July, she was viciously attacked on Twitter by users who tweeted a slew of abusive and racist tweets. Jones ended up meeting with Twitter's CEO, Jack Dorsey, and as she told Seth Meyers during a July appearance on Late Night with Seth Meyers, they removed several accounts.

At this time, no further information has been released about the hacking of her website.