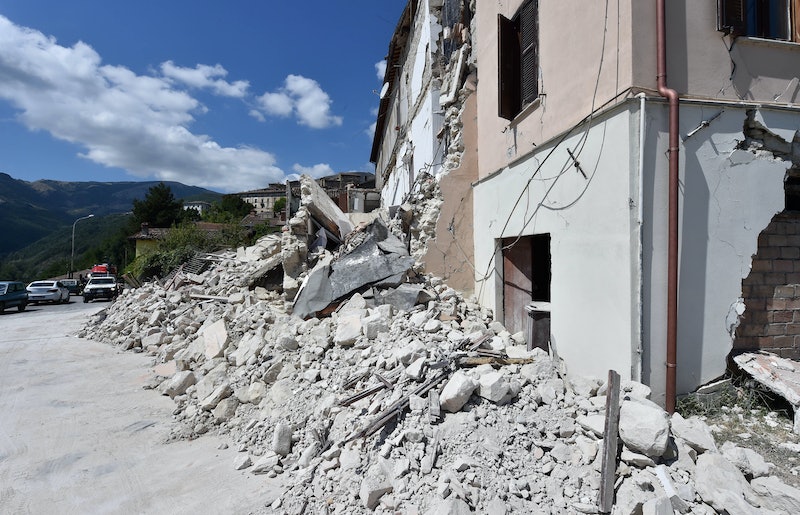 Italy suffered an unforeseeable and devastating disaster on Wednesday, Aug. 24. At 3:36 a.m. local time, a 6.2-magnitude earthquake ripped through central Italy, kicking off a wave of smaller quakes which knocked down buildings and buried people in the rubble. And if you're looking to get a sense of the scale of the destruction, you can see the startling aerial footage of Italy's earthquake-stricken towns. It's hard to overstate just how devastated some of these places appear, almost as through they were war-torn.

According to The New York Times, the regions worst struck by the quake include Amatrice, Lazio, Marche, and Umbria. Across those areas, the loss of life has been tragic. At least 120 people have reportedly died so far, and that number is expected to rise as time goes on, The Times reported.

In addition to some of the still photos that were taken of the post-earthquake destruction, there's also some footage available captured by aerial drones. Needless to say, it's very depressing imagery. The town of Amatrice, which was near the epicenter of the quake, has been virtually wiped out, with its mayor telling CNN that the town is "no more."

If you're startled by the level of destruction the quake seems to have caused, that might be because the towns it struck were uniquely ill-equipped to handle it. As The Guardian detailed on Wednesday, Italy has loose construction laws relating to earthquake safety and a real problem with unauthorized buildings ― a whopping 18 percent of its buildings are constructed without any official permission, therefore placing them outside the bounds of any safety rules and regulations or city plans.

Simply put, the Italian government historically hasn't done a great job of addressing the threat posed by earthquakes, although what happened on Wednesday mercifully doesn't seem to have killed as many people as the massive earthquake in L'Aquila in 2009, which left 309 people dead (though today's death toll could still rise further).

Hopefully, the figure of 120 dead cited by Italian Prime Minister Matteo Renzi ends up being the final tally, although since the number had been reported at just 73 previously, that seems far from a safe bet. Suffice to say that there's already been more than enough heartbreak for the people of Italy, and there'll probably be a lot more of it in the days and weeks to come.