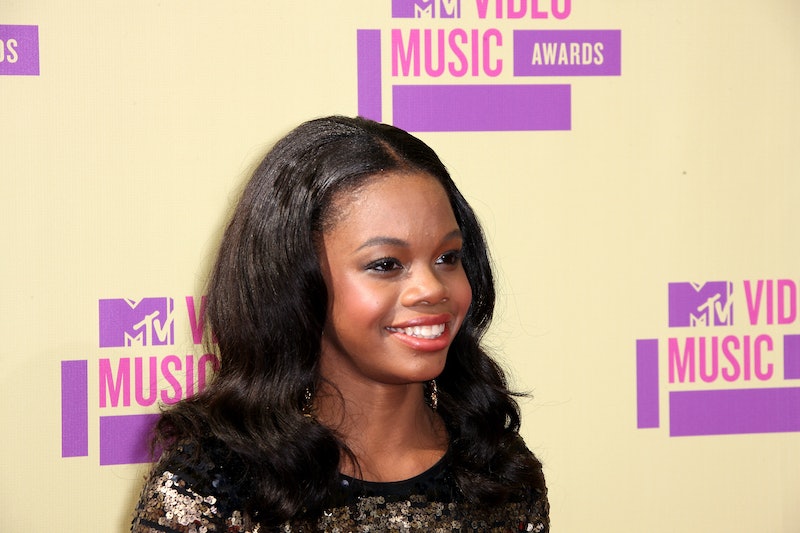 With the VMAs just around the corner, it's fun to take a little stroll down memory lane — you know, look at past performances, reminisce about all the awesome and/or outlandish red carpet moments, etc. Along those lines? Well, back in 2012, Gabby Douglas positively shined at the VMAs. Yep, in addition to her amazing performance alongside Alicia Keys and Nicki Minaj (she tumbled quite impressively as Keys belted her hit song "This Girl is on Fire," and Minaj rapped about winning the gold — does it get any more on point than that?) she also wore a completely medal-worthy spangled long-sleeved mini dress.

The dress itself alternated wide stripes of black and gold sequins, and served as a glitzy pitch-perfect reminder of her medals for the individual all-around, as well as the team competition. She paired the look with gorgeously waved hair and glossy lips, statement earrings, and some on-trend peep-toe booties. She accessorized further with a matching metallic clutch, as well as a Wonder Woman-esque oversized bangle — altogether, it was quite the stylish look.

That year, Douglas made her appearance at the show alongside her Fierce Five teammates — and fierce they were indeed, between Douglas' sequins, McKayla Maroney's pale pink sun dress, and Jordyn Wieber's elegantly draped royal purple number.

They certainly live up to their team nickname, no?

So, will the Final Five hit the VMAs red carpet like the Fierce Five before them? It's tough to say — though it's certainly exciting to think about what Douglas and her fellow teammates will do next after their historic run in Rio. First off, they'll be embarking on a tour of the country to meet some of their fans.

As for Douglas specifically? Well, she'll be acting as a judge in the upcoming Miss America pageant, alongside Austin & Ally star Vanessa Marano. Her presence on the program is sure to be empowering, and as Douglas told The Hollywood Reporter, "Miss America has been such an amazing event for so many years and I am excited to have the opportunity to judge the competition this year ... The contestants are a great example of strong women across America and I especially look forward to hearing the platforms that each of them will represent."

There have been no whispers on whether or not Douglas and the Final Five will be making an appearance at the upcoming VMAs, but let's keep our fingers crossed — we all know they'd bring their red carpet game as much as they brought their gymnastics game at the Olympics this year!