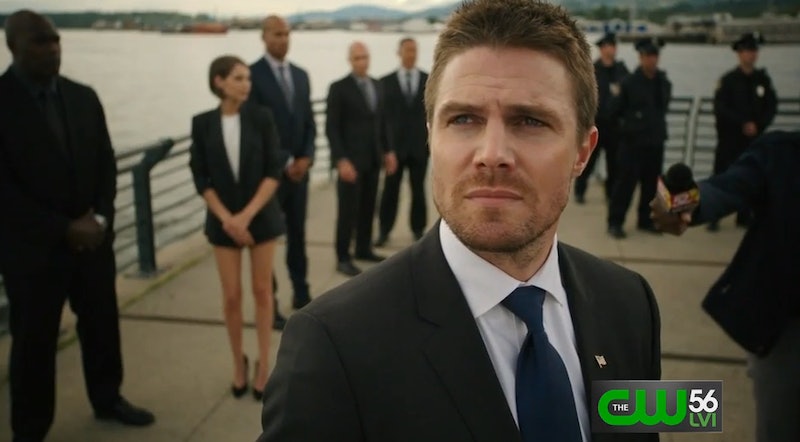 Well, hello there, Arrow fans. Long time, no see. While the show may not premiere for another two months or so, that doesn't mean the powers that be won't throw us a bone in the meantime. Because, uh, that's exactly what they did. As per ABC 7 News Boston, an Arrow season 5 teaser just debuted and it points to good things for the season ahead. Well, not exactly good in terms of Oliver, Felicity, Diggle, and crew living happily ever after (as if), but good for those of us non-fictional peeps who want to watch some majorly major Star City excitement unfold.

Anyway, enough beating around the bush. Here's the Arrow Season 5 411 that has amassed in this 20 second trailer. The inside look opens with Felicity giving Oliver a stern, but apparently sorely needed, talking to about moving on from the horrific events that took place five months ago. Which, I'm assuming encompass everything from Olicity's break up to Laurel's death to Damien Darhk's devastation. Why am I assuming that? Well, because as the teaser progresses, we get to witness a gigantic statue of the Black Canary being erected. And, there's also a nicely put together montage of new, impassioned villains arriving on the block. Ahem, some of those villains the Green Arrow gets to smack around, while others smack Oliver around. You win some, you lose some, you know?

But, perhaps the most intriguing part of this trailer takes place in a less thrilling moment down in the lair. That is, for those curious about Oliver and Felicity's relationship as well as where Thea stands in relation to the team, being that Diggle is otherwise occupied in the army as his fatigue-wearing would imply. The good news? Despite being exes, Felicity is still implicitly worried about Oliver. The other good news? Thea is down in the lair with Felicity, Curtis, and Lance, signifying that she's somewhat okay with being associated with Team Arrow again, however indirectly. The bad news? Thea's not being an especially supportive sister or vigilante as it appears Oliver's in some serious trouble and is in need of help but she's intent on letting him rescue himself.

Undoubtedly though, the crowning moment of these all too quick 20 seconds is that we get to see Mayor Queen in action (and in those suits).

More like this
The 'P-Valley' Season 2 Trailer Teases A Major Shakeup At The Pynk
By Johnny Brayson
'Obi-Wan Kenobi' Takes Place After This Key Star Wars Movie
By Arya Roshanian
'Gentleman Jack’s Cast & Crew Are Keen On Season 3, Too
By Frances Stewart
The 'It's A Sin' Creator Revealed A Massive Detail That Didn't Make The Final Cut
By El Hunt
Get Even More From Bustle — Sign Up For The Newsletter