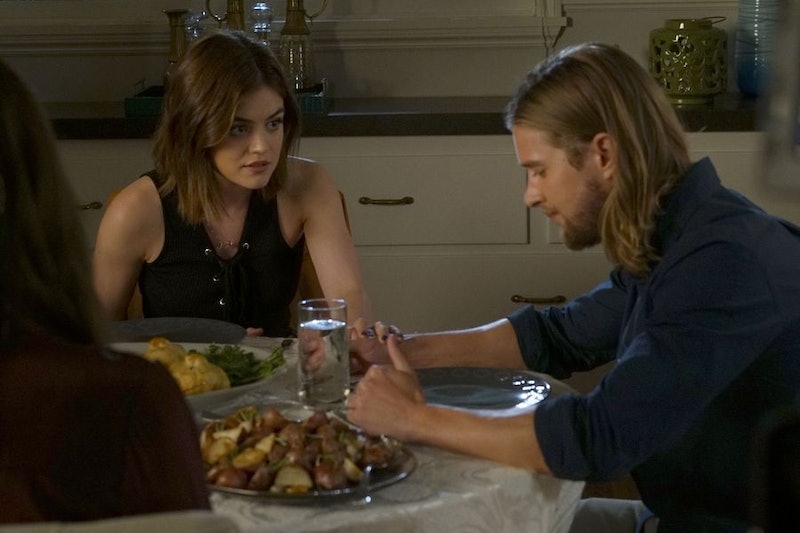 Say what you will about the crime rate in Rosewood (which is arguably pretty high), but there's also a lot of love that circulates throughout the town. In fact, it's where many beloved Pretty Little Liars 'ships first set sail, including Spoby, Emison, Haleb, and Ezria — just to name a few. But as great as many of these relationships have proven to be, that doesn't mean they're immune to any outside competition, which is something that Ezria fans may only now be coming to terms with in light of the undeniable chemistry between Aria and Jason on Pretty Little Liars. In the Aug. 23 episode, "The Wrath of Kahn," we were not only gifted with a flashback of a very shirtless Jason in bed with Aria, but also saw the true depth of their relationship, which clearly still exists on some level. And what we saw was so intense, some fans, like the hosts of Bustle's PLL podcast, Taking This One To The Grave, are now 'shipping Jason and Aria.

Contrary to what many fans believed before "The Wrath of Kahn," this was not just a random, one-time hookup that would later be classified as a mistake — this was a full-blown romance that cropped up between the two of them. Truthfully, I've always been a big Aria and Ezra supporter since pretty much Day 1, but even I found myself rooting for this relationship none of us ever knew even existed. In the span of just one hour, PLL started to make me question my 'shipping pattern — something that has never happened before. You can hear why the hosts of Taking This One To The Grave have also switched to Team Jason and Aria — and much more — in the episode below.

Aria has had other men in her life besides Ezra before, but I've never really supported any of those relationships the way I do her and Jason. Much like Ezra, Jason knows everything that Aria has been through in Rosewood, so she doesn't have hide that aspect of her life from him. Plus, he really just seems to get her, and not just because he knows how she takes her coffee (which is obviously important). Jason sees Aria's full potential and admires the woman she's become.

Ezra has always encouraged Aria as well, of course, and was major inspiration for her interest in writing. But his behavior towards her has been very unpredictable this season, with their relationship going from highs to lows and back again. He was devastated over losing Nicole, yet he was suddenly ready to propose to another woman not too long after they finally reconciled. And then he flew off to see if Nicole was still alive and didn't even text Aria for almost the entire trip.

I can appreciate the emotional aspect of the situation and how stressful it must be for Ezra, but still, Aria deserves to be kept in the loop. This is the woman Ezra supposedly wants to marry and he shouldn't leave her hanging, especially since it's pretty clear that she's worried about their future.

Jason, on the other hand, provided a nicely muscled shoulder for Aria to lean on and offered words of encouragement about her relationship with Ezra. He didn't use that time to try and win her back or take advantage of her vulnerable state. He was just trying to be there for her when she needed it most, no strings attached, which makes me think he might be the better endgame fit for Aria. But I may have to watch that shirtless flashback a couple more times just to make sure. I'm nothing if not thorough.

Listen to past episodes of Taking This One To The Grave here.

More like this
Everything To Know About Marvel's 'Echo' Series On Disney+
By Grace Wehniainen
'This Is Us' Just Gave New Meaning To Jack's Death & His Love Story With Rebecca
By Grace Wehniainen
Marvel's 'She-Hulk' Trailer Is Finally Here & The Hulk Lends A Big Helping Hand
By Grace Wehniainen
Will Viewers Revisit Welcome To Eden For Season 2? What To Know
By Kadin Burnett
Get Even More From Bustle — Sign Up For The Newsletter