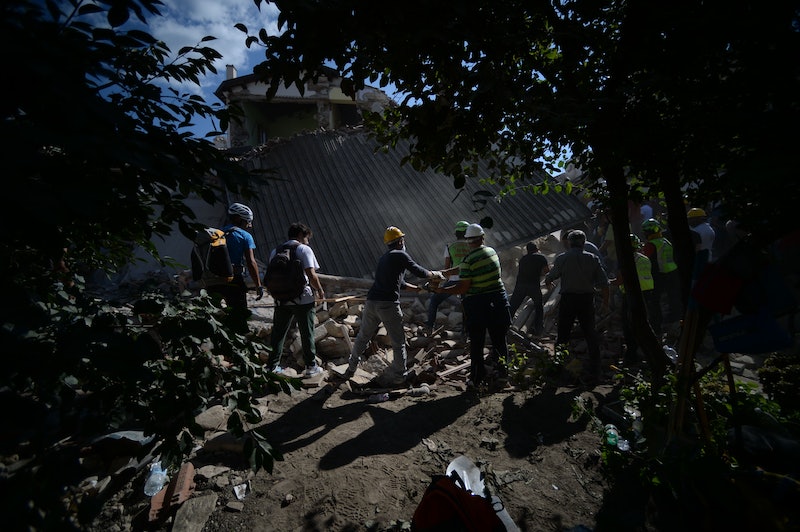 Early Wednesday morning, multiple towns across central Italy were shaken by a 6.2-magnitude earthquake, and it reaped a devastating toll. So far, at least 120 people have been confirmed dead by Italian Prime Minister Matteo Renzi, with the ever-present possibility of that number climbing even higher. The quake rocked towns like Amatrice and Pescara del Tronto, causing many buildings to collapse with residents still inside. And the immediate danger isn't necessarily over, either ― there's a chance Italy will face more aftershocks from the earthquake.

There have already been some aftershocks, to be clear. In the hours following the initial quake, which devastated some of central Italy's mountain towns, a series of aftershocks ― reportedly 60 of them in just four hours ― rippled through the area. According to USA Today, the strongest one recorded by Italy's Earthquake Institute clocked in at a magnitude of 5.5.

In short, aftershocks are almost always a concern in the aftermath of a major earthquake, and there's reason to believe they'll be a concern in Italy for a while yet. As The Daily Mail reported, a host of geologists have warned that there could be shakes and tremors for days, which would make the rescue and recovery process that much more uncertain.

Needless to say, a strong aftershock could pose a major risk to any of these stricken towns. There are countless homes already collapsed and crumbled, and many people reportedly believed to still be buried underneath rubble. It's a very treacherous set of circumstances, and it bodes poorly in the case of any more shaking or instability. When you see footage of the state of some of these towns, the level of damage is already startling ― Amatrice in particular somewhat resembles a war zone when viewed from afar.

When you see the level of damage done even to the buildings that still stand, it really hammers home how urgent the situation will likely remain for the next few days. It's also worth noting that sometimes, initial earthquakes are later downgraded to "foreshocks" instead, if a subsequent quake comes in at a higher magnitude. Hopefully that doesn't happen here, because clearly Wednesday morning's 6.2 magnitude one pushed some of the affected towns to their limits.

In other words, make no mistake: if you're somewhere within the affected region, you need to be vigilant and prioritize your personal safety in the days to come. While things might settle down without any more major incidents, that's not a certainty at this early juncture, and what happened on Wednesday morning provides a stark reminder of just how damaging these kinds of disasters can be.