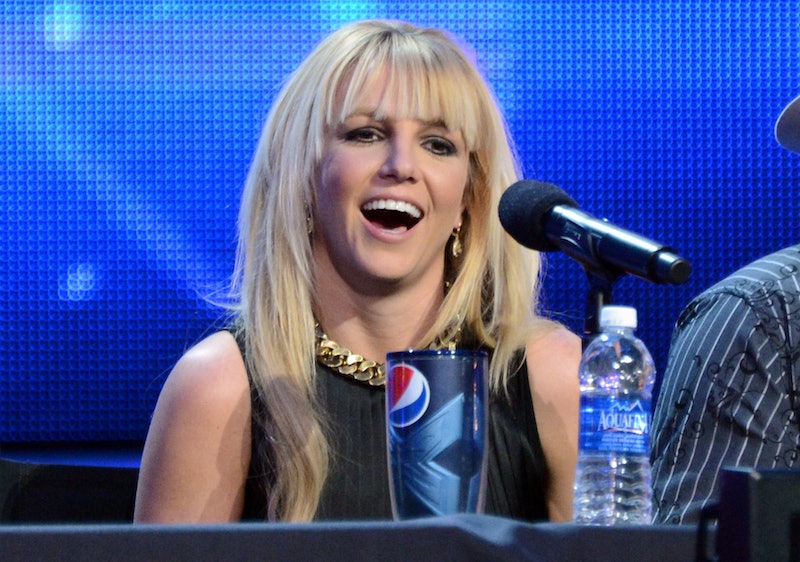 Ultimate Britney Spears fans, gather around, because there's some seriously amazing news coming your way about the Princess of Pop. According to The Hollywood Reporter, the "Piece Of Me" singer and one-time star of Crossroads is going to see her life flash across the small screen. According to the Wednesday report, Lifetime is producing a Britney Spears biopic, and it's the best news since Spears announced that her new album Glory would drop on Aug. 26. As a lifelong Spears fan (homegirl was my very first concert and I still remember it like it was yesterday) this news is pretty much everything to me, but I have to wonder — what took Lifetime so long?!? Spears' life has been the perfect underdog story for years now.

According to The Hollywood Reporter, the upcoming biopic begins shooting in September and is described as the "tumultuous true story" of her rise to fame, fall from grace and triumphant resurrection. The film, which will star Hail, Caesar! actress Natasha Bassett as Spears, will begin with Spears as an aspiring singer in Louisiana and examine things like her parents' divorce, her relationship with Justin Timberlake, and the tabloid fallout she received as a young star. It will also touch on some big Spears news stories from way back when, including her short-lived marriage to childhood friend Jason Alexander — a.k.a. the guy she got hitched to on a whim in Las Vegas. Eventually, the film will show Spears "hitting rock bottom," and her rising from her lowest point to rebuild her career.

Hopefully, the film will handle the "rock bottom" part of Spears' story with the sensitivity that it's due. Spears had a tough few years in which she lost custody of her kids and was placed under her father’s conservatorship, and it's definitely something that film should take seriously. Fortunately, fans have a reason to be optimistic that the film will do so: according to the film's press release, Lifetime took on this story because "[Spears] has battled back to rebuild her career to its former glory, proving to everyone that she’s a timeless force in entertainment." Anyone who has seen her Vegas residency show, or even listened to her new track "Make Me," will know this star is still on top of her game.

Fans of the "...Baby, One More Time" singer will probably already know the ins and outs of Spears' story, but that doesn't mean we won't love watching a Lifetime movie about the life of our pop princess. Spears has come a long way since her Timberlake and Louisiana days, and I'm excited to see this journey on the small screen.