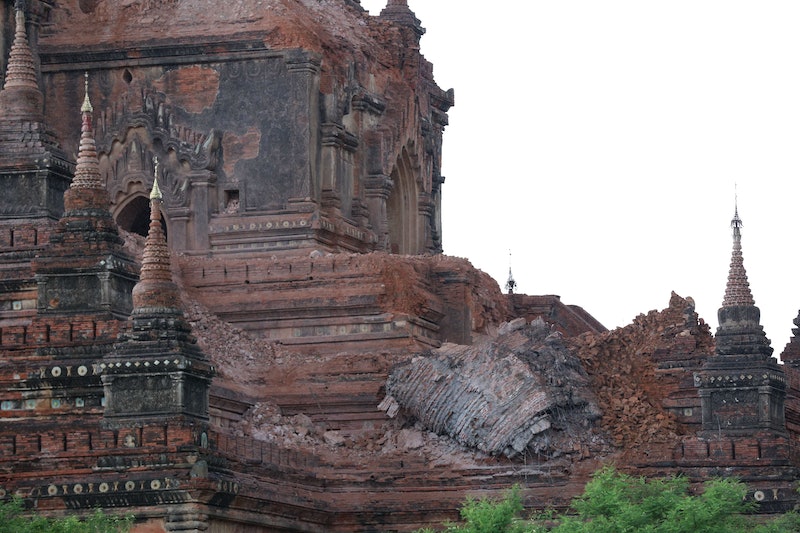 Just hours after a magnitude 6.2 earthquake struck central Italy, a magnitude 6.8 earthquake struck Myanmar, thousands of miles away. According to National Geographic, both earthquakes happened near two of the world's major fault lines, in regions with significant geological volatility. But the Italy and Myanmar earthquakes were not connected to one another, even though they struck on the same day. The earthquakes' different impacts on the regions they affected can be explained by the depth below the earth's surface at which each earthquake took place.

The death toll of the Italy earthquake has risen to at least 159, according to CNN, and multiple towns were devastated as buildings collapsed. The Myanmar earthquake left at least three people dead, The New York Times reported, and over 170 temples were damaged. The earthquakes seemed similar in magnitude, so why were their impacts so different? Susan Hough, a seismologist with the U.S. Geological Survey, explained to USA Today that while Italy's quake took place roughly six miles below the earth's surface, the earthquake in Myanmar took place at a much greater depth, approximately 50 miles underground.

Deeper quakes tend to cause less damage — which explains the disparities in death tolls — but they also tend to be more widely felt. That's why the earthquake in Myanmar, which took place at an intermediate depth, was felt in Thailand, Bangladesh, and India. The reason deeper earthquakes cause less damage is that seismic waves have to travel further to reach the surface of the earth, and they lose energy along the way. In Italy's case, however, the earthquake took place at a much shallower depth. Consequently, the shaking was more intense in Italy than in Myanmar because it was like setting off "a bomb directly under a city," Hough told the Associated Press.

Earthquakes in different regions can sometimes impact each other by sending out shockwaves that impact other fault lines, Hough told USA Today, but she added that the quake in Italy was not nearly big enough to have caused the Myanmar earthquake. However, the two quakes definitely do indicate that both regions are geologically volatile. As National Geographic pointed out, Italy is near a fault line along the Apennine Mountains, in an area between Eurasian and African tectonic plates that is "tectonically and geologically complex." Myanmar, meanwhile, is located east of the Sunda Trench, where earthquakes are common.

As a result of where they are located, both Italy and Myanmar have experienced devastating earthquakes in the past. But even though they have this in common, the earthquakes that both countries experienced on Wednesday were still extremely different, and when discussing and analyzing the impact quakes have, it is important to keep factors like depth and location in mind.