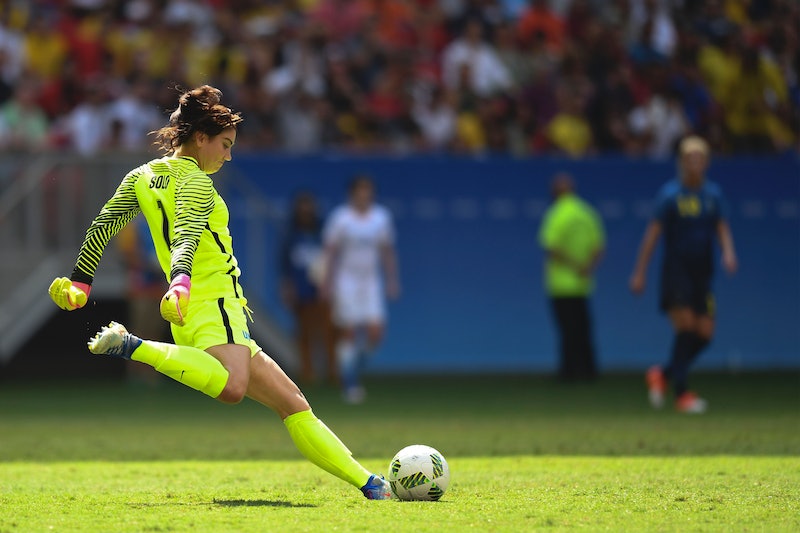 On Wednesday, U.S. Soccer announced that it would suspend star goalie Hope Solo from the U.S. women's national soccer team for six months. The suspension comes as a result of Solo's comments about Sweden during the Rio Olympics. After the Americans lost to Sweden in the quarterfinals, Solo called the Swedish team "a bunch of cowards."

The match between the U.S. and Sweden was undoubtedly a tough loss for the Americans. The game went into overtime and, ultimately, to penalty kicks. The U.S. lost 4-3 in the shoot-out, marking the first time in the history of women's Olympic soccer that the Americans have not medaled. Meanwhile, Sweden went on to win the silver medal.

Upon losing, Solo expressed her frustration by taking aim at the Swedes. "I think we played a bunch of cowards," she said. "The best team did not win today. I strongly, firmly believe that." She soon clarified that she was referring to the Swedes' style of playing. "They didn't want to pass the ball. They didn't want to play great soccer," she said. Now, although the Olympics are over, the drama surrounding Solo clearly is not. Solo's suspension means that she won't be eligible for reinstatement to the women's national team until February 2017.

Solo's comments about Sweden weren't the only part of her Rio experience to stir up some controversy. During many of her games, the crowd chanted "Zika" whenever she had control of the ball. The chants were in response to a tweet by Solo ahead of her trip to Rio — a tweet that many people found offensive. She shared a photo of herself covered by a net and face scarf, calling herself "#zikaproof."

The suspension isn't new for Solo, either. She was suspended for 30 days back in 2015 after an incident that occurred during a training camp with the U.S. women's national team. That first suspension came after Solo was in the passenger seat when her husband was charged for driving under the influence. She apologized after that incident, saying, "I accept and respect the Federation's decision, and more importantly, I apologize for disappointing my teammates, coaches and the Federation who have always supported me."

When she's not playing for the U.S. women's national team, Solo tends goal for the Seattle Reign, part of the National Women's Soccer League. Solo's Reign teammate Megan Rapinoe is also a member of the national team. There's no word yet whether or not the Reign will also pursue disciplinary action against Solo, but Rapinoe did express some frustration of her own about Solo's controversial comments. Ultimately, Solo's comments — and subsequent suspension — have cast an unusually dark shadow over the beloved American team.

More like this
Jake Daniels Just Became The UK’s First Active Football Player To Come Out As Gay Since 1990
By Sam Ramsden
What Is Jeanie Buss' Net Worth? The Lakers President Is Uber Rich
By Hugh McIntyre
Sandra Bullock, Girlboss Extraordinaire
By Matt Harkins & Viviana Olen
Graham Norton’s 10 Best Eurovision Zingers Will Leave You Howling
By El Hunt
Get Even More From Bustle — Sign Up For The Newsletter