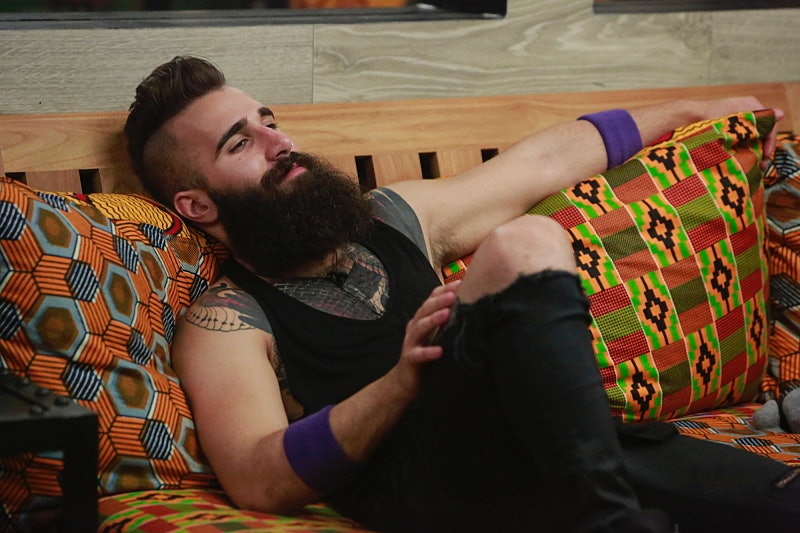 Paul has gone from friendly manipulator to aggressive emotional bully, and it's definitely not "friendship." When Natalie and Michelle decided to put Paul up on the block this week on Big Brother , they did it because they felt he was manipulating the entire house — suspicions that were confirmed when Nicole told them that Paul was going to go after James next. But his outbursts following the nomination ceremony seemed to turn things around. At the very least, it made Michelle and Natalie doubt their decision. It also made Natalie cry. That's right, Paul made Natalie cry on BB18 , proving he's a master manipulator after all.

When Paul learned that he was on the block, he went on a tirade against Natalie and Michelle, demanding to know why he was put on the block. After Natalie refused to talk to him while he was so angry, he followed them to the HOH room and confronted them. Admittedly, things were much more civilized, but his constant attacks and questions eventually pushed Natalie to tears — especially after he denied having any plan to take on James, insisting that Nicole and Corey had played them. What was especially strange about this exchange was that Paul seemed genuinely freaked out by Natalie's tears. As soon as she got upset, he switched tactics completely, insisting that she had nothing to apologize for in the game, and leaving the room.

Despite his awkwardness when the waterworks started, Paul probably felt great. His plan to make Natalie feel bad about putting him on the block clearly worked and, at least right after their confrontation, he appeared to have convinced her to go against Nicole and Corey. He's not all about friendship, he's all about winning. Need proof? After he reduced Natalie to tears, he spoke to Victor and solidified his plan to put Natalie and James on the block next week should he win HOH. He's coming for her, tears or no tears.