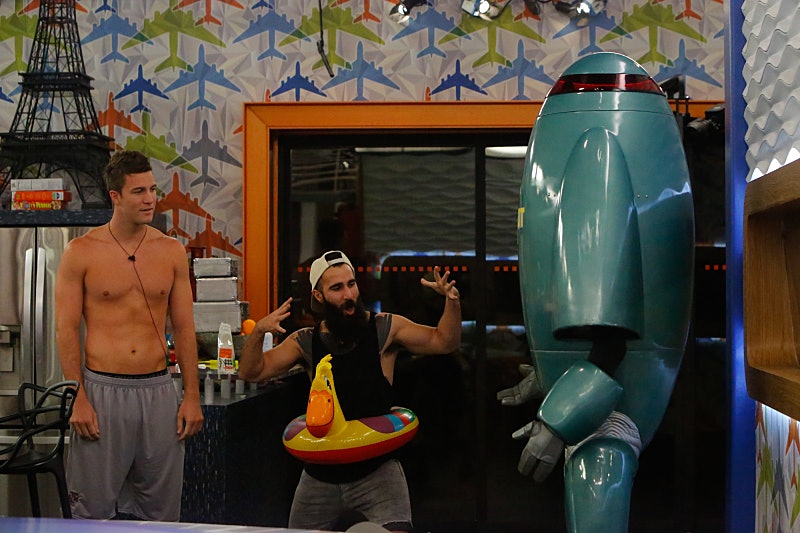 Paul took himself off the block on Wednesday night's Big Brother, effectively ruining co-HOH's Michelle and Natalie's plans to evict him this week. After pushing his way back into Michelle and Natalie's good graces by, among other things, making Natalie cry, Paul stayed up all night to study for the POV — a mental comp — and won the power of the veto fair and square. In an unsurprising move, Paul used the POV on himself on BB18 , and Michelle nominated Corey in his place. Paul using the POV was fairly predictable, as was Michelle nominating Corey for eviction. What isn't predictable now is who will be getting evicted from Big Brother come Thursday night.

Corey is a threat in physical comps, so it makes sense that he would go up in Paul's place. And on the surface it might seem like an easy bet to say that Corey will be evicted from Big Brother this week, but James and Natalie's tentative alliance with Corey and Nicole is enough to lead to at least a few surprises. Michelle doesn't want to see Victor leave, so it's likely she'll be voting to evict Corey, but what about Natalie and James? Natalie might seem on Michelle's side — and she definitely has a soft spot for Victor despite his close ties with Paul. But, if there's anyone that can sway her vote away from Corey, it's James. And James seems happy to stick with his final four alliance with Corey and Nicole.