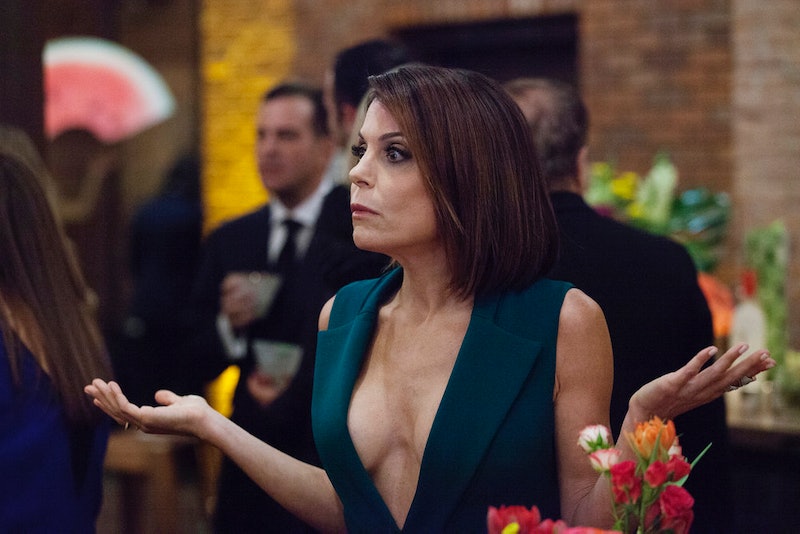 Bethenny finally told Luann what she knew about Luann’s fiancé, Tom D’Agostino, Jr., allegedly kissing another woman on Real Housewives Of New York, and it was a rollercoaster of an episode from start to finish. Though Luann was receptive and even a little thankful for Bethenny’s admission in the beginning, she made a sharp turn as soon as she talked to Tom and started blaming Bethenny for it all. Luann totally shot messenger Bethenny on Real Housewives Of New York, and it wasn't cool.

In a hotel room in Miami, Bethenny showed Luann some pictures of her fiancé Tom allegedly making out with a woman (the photos were only of the back of a man's head), and Bethenny was as bent out of shape as Luann was. But, Luann seemed mad that Bethenny didn't come to her immediately, and instead waited until she got photos of the alleged kissing. Luann was in Miami when she heard these claims, and she met up with Tom when they got back to New York. He never flat-out denied the claims — he said he didn’t remember, and then he said to Luann on the phone, “It’ll never happen again.” He and Luann did an interview with People soon afterward in which Tom said, “If I could take it back, I would. I deeply regret the mistakes I've made, and most of all hate the way it hurt Luann."

What was smart of Bethenny, though, was that she did her due diligence and got every single detail of the alleged act that she could out of the manager, the bartender, her friends — whatever — before she went to Luann. The only problem was that this delay would later put a target on Bethenny’s back in Luann's eyes.

Weeks later, Luann and Tom had made up and, at Bethenny’s Mexico-themed party, Luann attacked Bethenny, saying that it seemed like she was being a detective and wanted to break Tom and Luann up. This continued with Luann telling Bethenny to stay out of her life and leaving in a huff. Hi, Luann, you're missing the point here.

Bethenny did nothing wrong here — you could tell she didn’t want to talk to Luann about this, but she did what any good friend would. But I’m going to wager a guess that Bethenny isn’t invited to Luann's wedding.