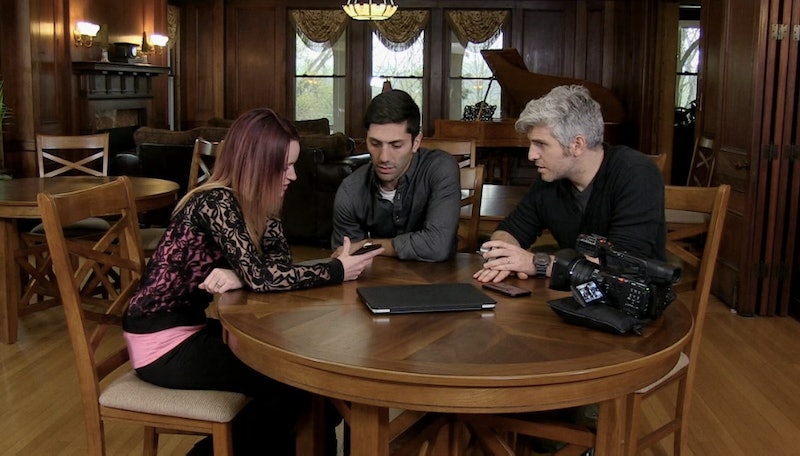 Catfish hosts Nev and Max are good for a lot of things: Excellent television, a shoulder to cry on, and obviously, internet sleuthing. But this time, they're about to help dig someone out of a serious relationship hole. On Wednesday night's episode of Catfish , Candic needs to meet Titus, a man she's been talking to online for awhile. The problem? Candic has been married (with a kid!) for seven years, and she wants to use the show to not only find out the truth about Titus, but to also come clean with her husband about the emotional affair she's been having.

Basically, the general idea here is that this episode had the potential to be super dramatic. And don't worry — it definitely lived up to expectations.

Essentially, Candic has been talking to Titus for a few months, but she hasn't been able to figure out what his deal is, and since she's had trouble communicating with her husband, she was glad to get the attention elsewhere. A total recipe for disaster, but that's what Nev and Max are for, right? And it'd be easy to judge Candic for her decisions, but she had a really difficult childhood, and now that she's coming to terms with it, it sounds like her life has been pretty tricky since. And is anything about relationships ever not complicated?

As always, Nev and Max easily figured out that the photo Titus uses belongs to someone else, and likely that the person pretending to be Titus is actually someone Candic knows. Fortunately, meeting up with that person was easy enough; he agreed as long as he could meet Nev and Max first. And then, the plot twist to end all plot twists happened: It was actually Jamie, Candic's husband! Dun dun dun.

What Jamie did sucked, but his intentions were good. He wanted to see what was bothering Candic since she wouldn't talk to him, and discovered that she's not trying to cheat — she's just sad about losing her mom at a young age and she's worried the same thing will happen to her. And even though I'd be incredibly pissed if I found out that my husband did the same thing, Candic was actually really relieved, and they were actually able to create a stronger relationship because of it.

Finally, a happy ending. It doesn't happen often on Catfish, but doesn't that make it so much better when it does?

More like this
What’s New On Netflix: A Victoria Justice Rom-Com & The Return Of David Letterman
By Arya Roshanian
What’s New On Netflix: The Return Of 'Bling Empire' & A Rebel Wilson Comedy
By Arya Roshanian
All The Clues Gillian & Edgar Are Still Friends After 'Temptation Island'
By Brad Witter
Marissa Has No Regrets About Her 'Temptation Island' Romance With Edgar
By Brad Witter and Kadin Burnett
Get Even More From Bustle — Sign Up For The Newsletter