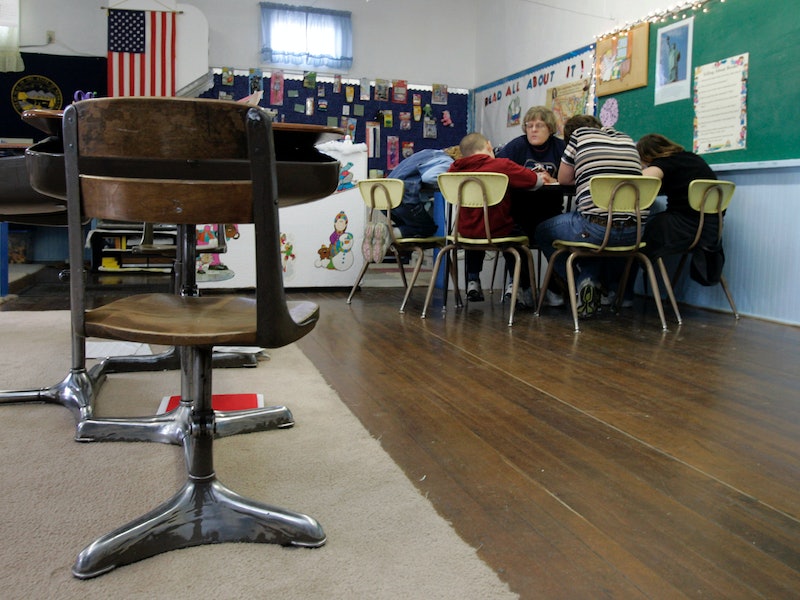 According to a new report from education nonprofit EdBuild, American students are still segregated by race and class. The report, "Fault Lines: America's Most Segregating School District Borders," indicates that roughly half of all American students live in high-poverty school districts, "where they are more likely to experience poor health, be exposed to violence, and attend schools in decaying buildings," the report said. However, these high-poverty school districts aren't far away from bordering school districts in which students benefit from better funding for their schools, indicating that even in 2016, segregation is still prevalent in the American education system.

While Brown v. Board of Education is frequently singled out as an important case in desegregation efforts, EdBuild's report points out the 1974 case Milliken v. Bradley, which ruled that school systems did not have to enforce integration across school district borders. As a result, district borders became tools of segregation that were upheld by the law — as long as a school district was not officially practicing segregation, then it was off the hook. This allows for segregation on the basis of socioeconomic status, too.

As the report indicates, property taxes are an important contributor to the funding that schools receive. School districts serving more affluent communities can legally separate themselves from school districts that are not as well-funded, where the students are in greater need. The Washington Post reported in 2014 that students learn better in economically integrated schools than they do in poor schools that simply receive more funding. But if families with the necessary resources can purchase homes in well-funded school districts while those without the means cannot, this simply fosters increased segregation.

In compiling the EdBuild report, researchers studied 33,500 distinct school district boundaries to determine which borders were the most socioeconomically segregating. Although the study uses household income as its segregating factor while analyzing these borders, it is important to keep in mind that race and class frequently intersect. For example, here is a list of the top five most segregating school district boundaries as determined by the "Fault Lines" report. According to Colorlines, the majority of students in the high-poverty school district in each pairing are black.

It should anger and appall us that two neighboring school districts could have such a discrepancy in poverty rates — that more than 49 percent of the Detroit City School District's residents live below the poverty line while less than seven percent of Grosse Point residents do, according to the report. And while these five cases are particularly extreme, this narrative of segregation is one that holds true in many pockets of the country.

This isn't something to ignore. It is a devastating reminder that 62 years after the Brown v. Board of Education ruling, segregation is still very much alive in the American school system, and we can't challenge it unless we take a long, hard look at policies in place – like property taxes — that uphold the status quo. You can read the full report here.