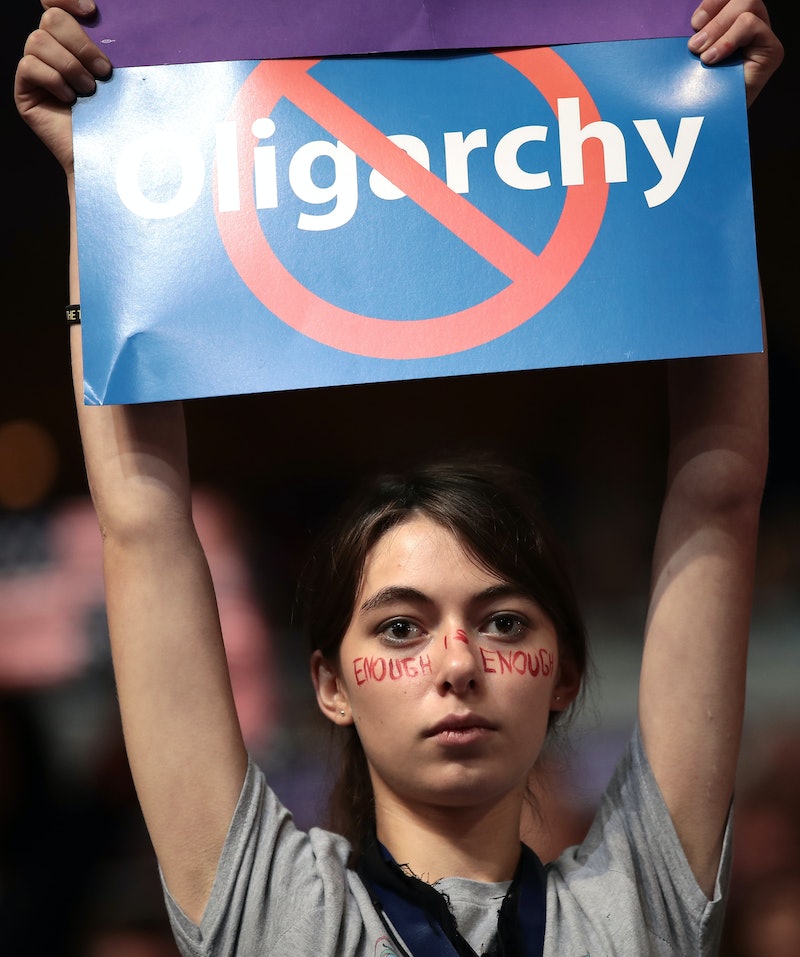 Like many of Bernie Sanders' supporters, volunteers, and delegates, I was disappointed to see, up close and personal, the level of dysfunction and disunity at play while attending the Democratic National Convention in Philadelphia last month. But also like many of my fellow activists and organizers, I think that there is as much to be gained from working within existing structures as there is from working to dismantle them. That is why I decided to join Our Revolution — because I believe that working towards a peaceful political revolution is the best shot that young people have at making a lasting impact in the American political system.

"Election days come and go, but the struggle for justice continues," said Bernie Sanders, the independent senator from Vermont, as he closed out the inaugural livestream of Our Revolution on Wednesday, Aug. 24. Our Revolution will attempt to continue to channel the energy, organizational skills, and people power of the Sanders campaign in order to effect incremental progressive change on a national basis.

From supporting progressive candidates and statewide ballot initiatives, to strategically protesting the corporate power grab written into the Trans-Pacific Partnership, to pushing for a nationwide single-payer health care system, the people joining Our Revolution want to stay connected to the people and causes they care about, despite the fact that their preferred candidate didn't end up winning the nomination of the Democratic Party. If you have a progressive's perspective, there is a whole lot of work to be done regardless of who happens to move into the White House in 2017.

Our Revolution will largely keep the same kind of open, collaborative organizational structure that propelled the Sanders campaign forward and set the progressive grassroots ablaze. The national team is already soliciting policy papers from respected community organizers and activists to scale down Sanders' platform for smaller political markets. In other words, they're trying to figure out how to move the national agenda forward without being in the White House. At the same time, other groups are trying to make inroads in the structure of the national Democratic Party, like the working group of people brought together by the Sanders campaign who are trying to create a permanent environmental committee.

If all of this sounds pretty boring for a group with the word "revolution" in its name, well, that's because it kind of is. This group is about empowering people to try and take over local politics first, while maintaining a level of national intellectual and organizational support. That's why Our Revolution is also spending a lot of time looking for progressive candidates to run for elected office: everything from school board vacancies, to mayoral races, to U.S. Senate seats will be on the table. That's where Sanders' nationwide core group of energetic supporters will come into play. The group hopes they'll be able to run successful candidates by leveraging the combined power of Sanders' dedicated legions of supporters.

The most important thing that my experience as a Washington state delegate in the Democratic Party's 2016 electoral contest has taught me is that a well-run, coordinated ground campaign is necessary in order to go up against well-financed, establishment interests. That means that just causes and good ideas often never get the attention that they deserve, merely because it happens to be against the best interests of a multinational corporation. It becomes just that much harder to then make changes for the better. With that being said, anyone interested in lending their own unique set of skills to help grow the nationwide progressive grassroots can check out ourrevolution.com/act for more information about how to take part.