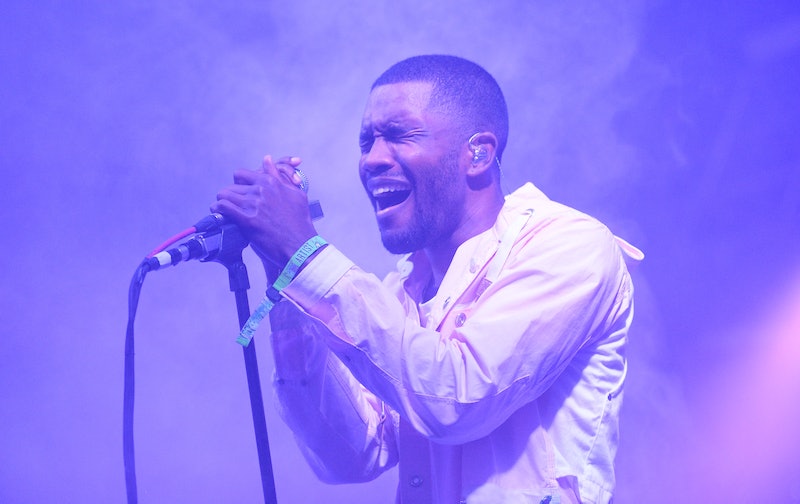 After four years of radio silence, R&B artist Frank Ocean, whose last release was 2012's near-perfect Channel Orange, finally came out with his next album, Blonde. And now that he's broken the seal, finally releasing not just two versions of Blonde, but also a visual album, Endless, and a 300 plus-page zine called Boys Don't Cry for fans to devour, it almost seems like anything could happen. So to react his newly reinvigorated fanbase even more, will Frank Ocean perform at the VMAs? He's not currently scheduled to perform or even appear at the awards show this year, which makes sense, because Blonde was such a huge surprise. And Ocean has not released any statement either confirming or denying the possibility of an appearance, but he has worked with Beyoncé, the most-nominated artist this year, as well as having a brief moment on Kanye West's The Life of Pablo, which garnered two nominations.

Perhaps one of these two artists will be influential enough to rope in Ocean to a performance with them or as a part of a tribute or surprise introduction. There are honestly so many ways he could be worked into the show — after all, this is where the Queen decided to announce that she was expecting Blue Ivy while performing endless "Love on Top" riffs. It also happens to be where Kanye West interrupted Taylor Swift, and I know I'd rather see a Frank/Kanye collaboration way more than I'd like to see that old feud dragged up again.

VMAs ratings are likely helped by such surprises, so I think it's safe to say that MTV could have a few tricks up its sleeve. In fact, bringing out Ocean for a surprise performance, wouldn't actually be that surprising when you consider the VMAs' past history of shocking topical moments.

However, even if fans would love a last minute addition to accommodate Ocean, there's another complication: he might not even want to perform at the show. Sure, Ocean has performed at the VMAs before, but he's clearly a perfectionist, given the amount of missed release dates, and favoring the surprise drop over the typical round of interviews and press that accompany the standard (though increasingly old-fashioned) album delivery. Because of that, I think there's a good chance that Ocean wouldn't want to perform as soon as this Sunday night.

MTV may be able to rope Frank Ocean into performing at the 2016 VMAs, either through another artist or just as a last minute surprise to celebrate Blonde's release. And though it would be an incredibly exciting opportunity to watch the singer perform live after so many years of waiting, his devotion to perfectionism and defying expectations could leave fans disappointed if they consider this performance a sure thing. I'd say the best thing to do is maintain the same attitude you should have when it comes to anything Frank Ocean is involved with: expect nothing, and when new work does arrive, simply enjoy how fantastic it is.