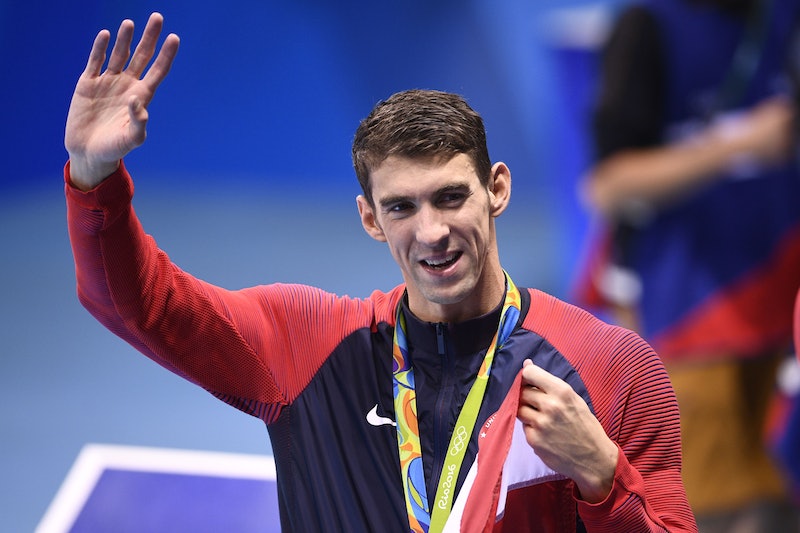 Retirement is going pretty well for Michael Phelps. The Rio Olympics may be over, but the American athletes are still everyone's favorite celebs of the moment. With MTV’s 2016 Video Music Awards airing live from New York this week, it's no surprise that some of the gold medalists from Rio will be in attendance. It's been confirmed that Michael Phelps will present at the 2016 VMAs, but this isn't his first time gracing the awards show. You might have forgotten that because it’s been eight years since Phelps has been on MTV red carpet, but it’s about time that he's welcomed back like the champion he is. After all, how can you resist a man with 23 gold medals? MTV has not announced what exactly he's presenting, whether it's an award, a musical performance, or something else, but wouldn't it be amazing if he welcomed Britney Spears back to the VMAs stage after her own long absence?

MTV also announced that Phelps won't be the only Olympian there, as the Final Five gymnastics team will be presenters as well. Other presenters include Ansel Elgort, Jimmy Fallon and Fifth Harmony, and there will be performances from Ariana Grande and Nicki Minaj, Nick Jonas and Ty Dolla $ign, Future, and Rihanna after she receives the Michael Jackson Video Vanguard Award. With all of these celebrities in attendance, it seems like it’s going to be an amazing show, especially now that we know our favorite Olympian will be there. And I'm confident that Phelps will do a great job presenting, because this isn't his first high-profile event.

After taking home eight gold medals in the 2008 Beijing Olympics, Phelps continued to stay in the spotlight when he introduced Lil Wayne’s performance at the VMAs. In case you forgot what happened that year, here are a few tidbits from the event: Russell Brand hosted and made some seriously controversial remarks, purity rings were a topic of conversation, and Britney Spears’ “Piece of Me” won a lot of awards.

The "Curtain Of Distraction" At ASU

Earlier this year, Phelps helped Arizona State University’s basketball team with the “curtain of distraction.” It’s pretty self explanatory, but if you don't know, that's when ASU distracts the opposing team while trying to make free throws. The curtain opened and there stood Phelps in nothing but a speedo, a bow tie, and all of his gold medals. “He missed both!!” Phelps captioned the video on Instagram, and I can't blame anyone for being distracted by that.

After coming home from the Rio Olympics, Phelps stopped by America’s Got Talent to help Nick Cannon co-host the live results show on Wednesday. He didn't really have too much to say during his co-hosting duties, but he did talk about how great it was to have his son in the audience during the Olympics and mentioned that he watches America's Got Talent every time it's on.

Back before Rio, London, and Beijing, Phelps stopped by the popular MTV show and hung out with Damien Fahey. Fun fact: JoJo and Good Charlotte were also there that day because the early 2000s were the best time to be alive.

In 2013, Phelps showed off his golfing skills during the yearly Waste Management Open in Scottsdale, Arizona. He participated in the Pro-Am during the tournament that year.

Phelps has been popping up at non-Olympics events for years and I can't wait to see what he does this time around at the 2016 VMAs.