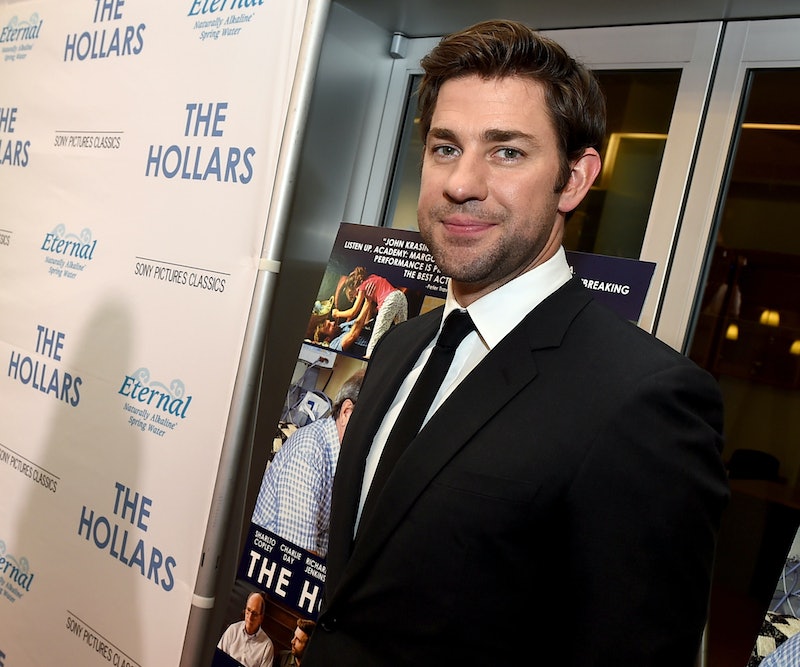 Learning about the trick an actor uses to make themselves cry on screen is one of those little tidbits no one can resist — like finding out what your favorite band has on their tour rider. What childhood trauma have they gone through that allows them to cry so realistically on cue? Do they just pinch their leg really hard out of frame? There must be some move that gets the tears flowing, right? Well, for John Krasinski, crying in The Hollars , which hits theaters Aug. 26, was easy. Not only is he just naturally a crier (me too, dude), but the movie related to his real life in a pretty powerful way.

"I’ve always been a crier. I think my cousins used to call me Baby John til I was like 20," the star and director says while sitting across from me in the Crosby Street Hotel at The Hollars junket in New York. "I'm happy to cry at the drop of a hat, so when these powerful scenes come up it's very easy." (If you're thinking back to his tearful scenes on The Office now, you're not alone.)

But it wasn't just the fact that he cries easily that got him to let it all out in The Hollars. The film is about a man who moved to New York City and has to fly back to his hometown when his mom is hospitalized, so, unsurprisingly, there's going to be some emotional moments. But it's bigger than that, and there are other family issues at play, as well, that make the film something that pretty much anyone will be able to relate to in one way or another. And it may surprise viewers just how hard different scenes, or even single lines in the characters' conversations, hit.

"What I'm really looking forward to people seeing in the movie is how this family on the screen quickly becomes your family and you start relating to issues you have with your own family, loves you have with your own family," Krasinski says. "And so that's what I was doing as an actor, when I had that scene [in the hospital] with Margo [Martindale, who plays Krasinski's character's mother in the film] just looking in her eyes got me welled up. There was something really powerful."

He credits the transition the movie takes between these heavy hitting emotional scenes to more humorous ones to writer Jim Strouse, who he says "is one of the rare writers who can do these hairpin turns between emotion and comedy in a way that is real."

The story aligned with Krasinski's own life in a way that made it even more powerful, as both an actor and director. In the film, his character, John, is expecting a child with his girlfriend, Becca, played by Anna Kendrick. Krasinski says, "This movie would have been very different had I directed it five months before I did, because my daughter, my first daughter, was four-and-a-half months old when I went to direct."

There's a really relatable scene between John and Becca that takes place in a hospital that will likely speak to many couples, regardless of if they're having a baby themselves or have just been through a really tough or stressful time in their relationship.

"I've always looked forward to being a father and yet you can't prepare for this existential mirror that's held up to you when you have a kid," says Krasinski, who now has two daughters, Hazel, 2 years, and Violet, 2 months, with wife Emily Blunt.

"You know, I was always thrilled to have a baby and yet there's still this big — there's all these questions that you have of yourself and now you have a responsibly for someone else," says Krasinski. "So a lot of those scenes, especially the scene, I would say, where I'm talking to Anna Kendrick in the hospital and she’s asking what's up with me and why I had been so different lately. And I think that to me, I could really connect to that character, not being upset or not wanting kids, but just being totally blown away by the idea."

And that's what the movie's really about — these different situations that we all go through in life. The themes about family, whether it's the one you grew up with or the one you're creating, are universal, so it doesn't matter if you connect just as closely as Krasinski did.

You just might cry a little more if you do.