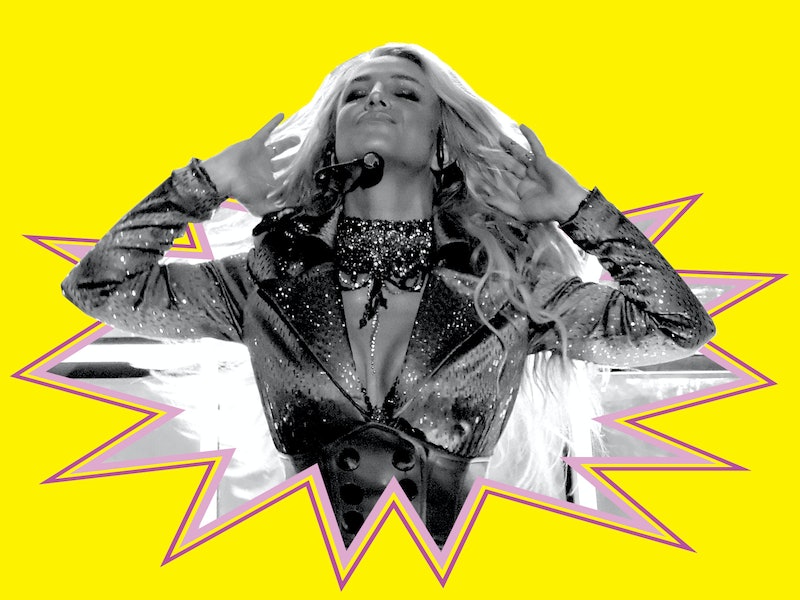 Now that we’ve heard the leaked version of Britney Spears’s new album, Glory — officially out on Friday — fans know it lives up to its name: Britney’s back, b*tches. But being a pop star, particularly a female one, has changed dramatically since Spears' last true glory days, the early aughts. Namely, the job description has somehow added one major bullet point: Be a feminist leader. With Beyoncé leading the charge, Taylor Swift, Lorde, Miley Cyrus, and Selena Gomez, among others, have fallen into formation to pick up some of Gloria Steinem’s slack.

Spears has neither discussed nor demonstrated any feminist tendencies, beyond a few girl-power lyrics that were as controversial as being pro-puppy. (“Stronger than yesterday, now it’s nothing but my way!”) Her first video from Glory, for the single “Make Me,” takes a cutesy, weak stab at something vaguely feminist by, as we’d say in the women’s studies department, pandering to the female gaze — i.e. parading a lot of shirtless men around in addition to, as usual, objectifying Britney’s sick-as-ever bod. So how does she fit into the 2016 pop landscape full of aspiring Friedans and de Beauvoirs? By reminding us that sometimes pop music can be a simple respite from complicated lives — three minutes of ear candy extolling the pleasures of good sex or mourning mundane heartbreak. That said, Spears as a cultural phenomenon has plenty of feminist food for thought.

In the early 2010s, it became the thing for interviewers to ask female pop stars: “Are you a feminist?” Whatever the answer, it made headlines; feminist sites railed against stars who didn’t embrace the label, and anti-feminists rolled their eyes at those who did. (Meanwhile, no one asked Justins Bieber and Timberlake where they stood on gender equality.) Spears was giving few interviews at the time, and media seemed to have decided to go easy on her after her 2007 breakdown — more on that in a bit — so she never faced this particular question.

Then Beyoncé’s self titled 2013 album delivered the Big Bang of pop star feminism. First Bey extensively sampled Chimamanda Ngozi Adichie’s TED Talk defining feminism in the song “***Flawless,” then she performed at the 2014 MTV Video Music Awards with the word "FEMINIST" in lights behind her, and thus it was ordained: All female pop stars must now be feminist.

As a feminist, I still get choked up thinking about those moments. It continues to cheer me when I find myself in my Beyoncé dance class with a room full of women as Adichie urges each of us to be “a person who believes in the social, political, and economic equality of the sexes.” But I don’t need every pop star to serve as my go-to feminist theorist. I’m fine with procuring those services from, say, Jessica Valenti or Andi Zeisler or Gloria Steinem — who's still out there doing her thing. Beyoncé’s Lemonade is a masterpiece of intersectional feminism as well as a great record, but lord knows we can’t all be Beyoncé.

Of course, the fact that Brit hasn't branded herself as a feminist doesn’t mean that appreciating Spears is anti-feminist. I’ve been a fan (and a feminist) from the beginning, and I see Britney not as a feminist leader, but as a feminist issue. Everything that has ever happened to her, since stepping into the public eye at age 17, has feminist implications. Since her breakthrough moment — the “… Baby One More Time” video — her sexuality has been exploited by any major corporation that could get a piece of it. Magazines have been particularly on top of this task, starting with that infamous 1999 cover featuring a teen Britney in her childhood bedroom in her underwear holding a Teletubby. She famously claimed to be a virgin, which inspired years of speculation as to her sexual status courtesy of a creepy, leering media. Later, mom Lynne Spears revealed in her book that Spears had lost it at 14, well before becoming famous, proof that the pop star had been cajoled into playing the virgin-whore dichotomy for dollars… and also proof that literally everyone in her life was willing to sell her out.

All this shaming climaxed during her epically public 2007 meltdown, which was defined by a blatantly symbolic act: Britney shaving her own head, and thus shedding the femininity and beauty that made her famous.

The singer was subsequently criticized for being too sexual, a bad mother, a party girl, and pantyless in public. (Never mind that it was the paparazzi sticking a camera where it didn't belong that captured the shot — and the tabloids who deemed the infamous image publishable.) All this shaming climaxed during her epically public 2007 meltdown, which was defined by a blatantly symbolic act: Britney shaving her own head, and thus shedding the femininity and beauty that made her famous. Since then, her body has become a barometer for her career status, forevermore scrutinized as to where it ranks on the Britney career spectrum: Is it closer to its 2001 “I’m a Slave 4 U” heights or its 2007 “Gimme More” lows? Every major moment of her career has provided enough fodder for dozens of women’s studies papers.

In fact, it’s easy, even imperative, to root for Britney Spears if you’re a feminist. Britney may never be a feminist leader, but watching her career — and hoping for her triumph — is a feminist act.