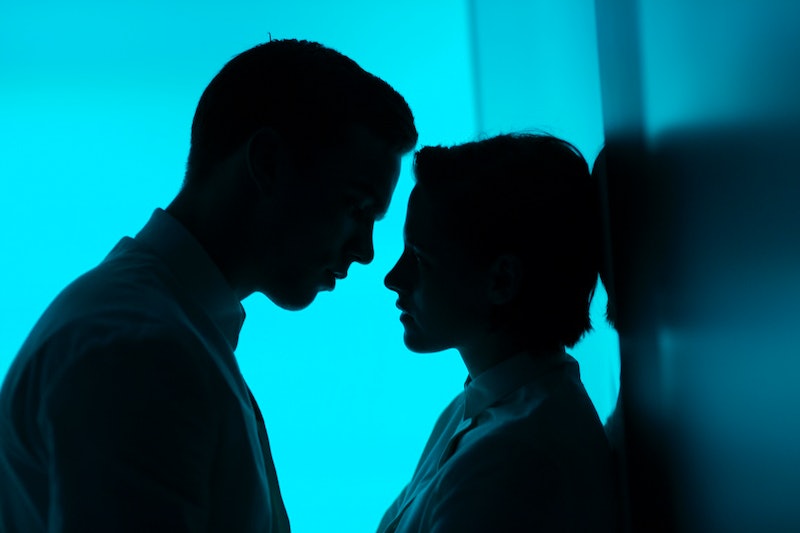 When you think of the term "sci-fi," the next word to pop into your head probably isn't "sexy." Despite being relatively close together in the dictionary, these two concepts seem to have little in common. However, I would argue that if you look a little deeper, you can see that they're not mutually exclusive. Sci-fi movies often place characters in dangerous or unfamiliar situations, leaving a lot of tension in the air. And, sometimes, there's a healthy dose of sexual tension to go along with it. Yes, believe it or not, science fiction movies can be sexy.

Now, when trying to identify sexy sci-fi movies that you might enjoy, it's helpful to remember that science fiction is a fairly wide-reaching genre. A movie doesn't have to contain robots to qualify as science fiction, nor does it have to feature a slimy creature, or a spaceship, or people in lab coats. Instead, a sci-fi movie can be a dystopian drama, or an otherwordly fantasy, or an alternate reality thriller. It's also helpful to remember that a movie can be sexy without containing any actual sex. For example, there was no sex in The Martian, but staring at Matt Damon for two hours was, in my opinion, a sexier experience than watching any recent Nicholas Sparks adaptation.

So take a look at these other sexy sci-fi movies that are worth checking out.

Jane Fonda slays in this overtly sexual sci-fi film that came out in 1968 and has become a cult classic in the years since.

Nichols Hoult and Kristen Stewart get in on a future dystopian society in this 2015 drama from director Drake Doremus.

This sci-fi fantasy consists of six beautiful intertwining stories, more than one of which contain some sexual encounters. The film stars Tom Hanks and Halle Berry, among others.

Picture Romeo and Juliet, except it's Matt Damon and Emily Blunt on the run from an ominous government intelligent agency that's determined to keep them apart.

Ryan Reynolds is fantastic in this 2015 thriller, and, even though the second half of the movie is the more important part in terms of his character's personal growth, the first half contains some very sexy scenes.

6. Eternal Sunshine of the Spotless Mind

This iconic 2003 film includes a super-long sex scene, which, let's just say, might confuse some viewers but entice many others.

This 2009 fantasy box office hit featured a lot of intimacy, if not any actual sex, but take note that the re-release includes an extended "sex" scene.

Love is really hard when you're a zombie, but this 2013 film, starring Nicholas Hoult, proved that it's not impossible.

It's a thing of beauty when Tris and Four finally hook up in this YA dystopian adaptation, the second in the Divergent series.

This 1990 movie is known for its inclusion of a three-breasted prostitute, but it also features an undeniably sweet sexual encounter between Arnold Schwarzenegger and Sharon Stone.

Let's be real — there was always sexual tension between Princess Leia and Luke and Han Solo, even at the very beginning. The Empire Strikes Back includes a particularly passionate kiss.

Will Smith in the shower is a highlight of this 2004 sci-fi thriller, about a battle between robots and humans.

This acclaimed movie is notable for its voice-only sex scene between Scarlett Johansson and Joaquin Phoenix's characters — only one of whom is human.

The acclaimed 2014 movie follows a programmer, a CEO, and a humanoid robot, played by Domhnall Gleeson, Oscar Isaac, and Alicia Vikander, respectively. There's a lot of sexual tension.

In this 1993 sci-fi blockbuster, Sylvester Stallone and Sandra Bullock have sex using virtual reality helmets. The future is weird.

There is actually no sex in this 2014 movie, but Scarlett Johansson's titular character is a sexy, brilliant badass.

The 1985 classic film has yet another psychic sex scene, this time set in a pool.

Stream Under the Skin here.

Scarlett Johansson plays yet another otherwordly being in this dark, sensual 2013 sci-fi horror film.

As you can see, sex and sensuality are not as far off from the sci-fi genre as you might have assumed. These movies prove that sci-fi movies can be as sexy as they are thought-provoking.

More like this
Why Acts Of Service & Gift Love Languages Are A Dream Pairing
By Lexi Inks
Breeding Kinks Have Been On The Rise Since Roe V. Wade Got Overturned
By Lexi Inks
Are Quality Time & Gift-Receiving Love Languages Compatible?
By Lexi Inks
The Differences Between Polyamory & Open Relationships
By Lexi Inks
Get Even More From Bustle — Sign Up For The Newsletter

This article was originally published on Aug. 25, 2016